Dad arrested in child’s death; police say she was thrown from balcony

A 32-year-old Nevada man is accused of throwing his 2-month-old daughter from a second-story balcony and lighting a fire inside his fiancé’s apartment that killed her dog.

LAS VEGAS - A 32-year-old Nevada man is accused of throwing his 2-month-old daughter from a second-story balcony and lighting a fire inside his fiancé’s apartment that killed her dog.

The Las Vegas Metro Police Department arrested Clarence Martin Jr. on Oct. 24 after a string of alleged crimes that started in the 10000 block of Jeffreys Street and ended at McCarran International Airport, according to a police report.

Authorities first learned of the incident shortly after 3:30 a.m. when a neighbor called to report a domestic disturbance.
By the time officers arrived, they saw Martin fleeing in a white Mercedes Benz which belonged to his fiancé, KVVU reported.

Responding officers said they witnessed Martin slam into a Toyota Corolla as he left the complex.

Before police arrived, Martin woke up his fiancé and daughter with kicks, police said. She took her baby to the living room and sat on the couch.

The mother told investigators Martin took the child from her and walked to the balcony. He returned empty handed moments later, police said. 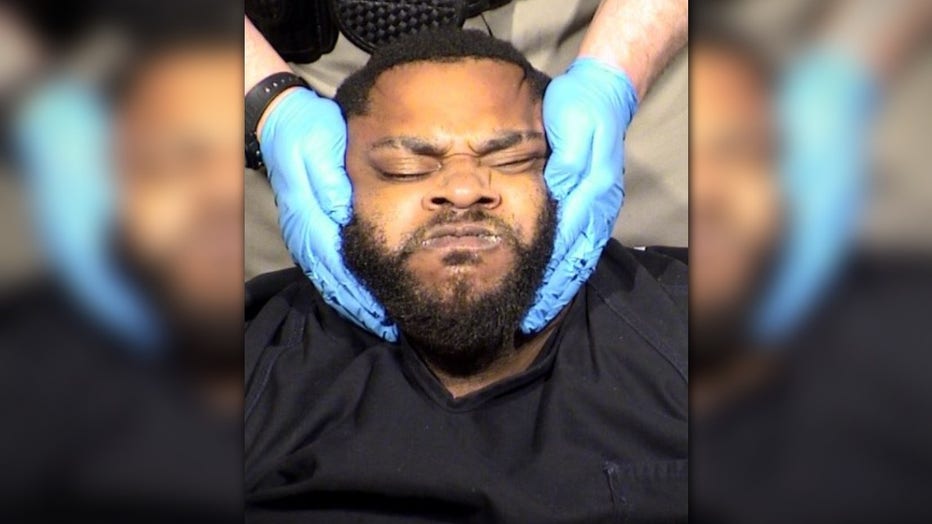 Clarence Martin Jr. was booked for open murder, first-degree arson, killing an animal, battery on a protected person and duty to stop at the scene of an accident. (Source: Las Vegas Metro Police Department)

The mother found the infant lying on the ground, according to police. The child wasn’t breathing after the 22-foot drop, prompting a neighbor to perform CPR. Doctors at a local hospital later pronounced her dead.

A witness told police she saw Martin leaving the apartment shouting “burn, (explitive) burn. This is what you get for cheating on me,” KVVU reported.

Smoke filled the apartment as the flames spread. Seven other units had to be evacuated as Clark County firefighters responded to the area, officials said.

The mother’s poodle, still in a cage, was later found dead inside the home.

At the top of the hour, police caught up to Martin at the airport. By that time, he had struck two more vehicles, police said.

An airport employee told authorities Martin wasn’t wearing a shirt when he crawled into a secure area via a luggage conveyor belt. Martin allegedly found a TSA officer’s shirt in the break room. After putting it on, he removed his pants, police said.

Near the tarmac, authorities said Martin placed items into an American Airlines van before being arrested.

The fiancé said she had been in a relationship with Martin for four years. She told police Martin had disclosed his previous mental health issues, but she said she had not seen any episodes until the three days leading up to incident.

Martin was booked for open murder, first-degree arson, killing an animal, battery on a protected person and duty to stop at the scene of an accident.

According to the Las Vegas Review-Journal, Martin is being held in a psychiatric ward and is expected in court later this week.