The cats, which had mild respiratory illnesses and are expected to recover, are thought to have contracted the virus from people in their households or neighborhoods, the U.S. Department of Agriculture and the federal Centers for Disease Control and Prevention said.

The cats, which had mild respiratory illnesses and are expected to recover, are thought to have contracted the virus from people in their households or neighborhoods, the U.S. Department of Agriculture and the federal Centers for Disease Control and Prevention said.

The finding, which comes after positive tests in seven tigers and lions at the Bronx Zoo, add to a small number of confirmed cases of the virus in animals worldwide. U.S. authorities say that while it appears some animals can get the virus from people, there’s no indication the animals are transmitting it to human beings. 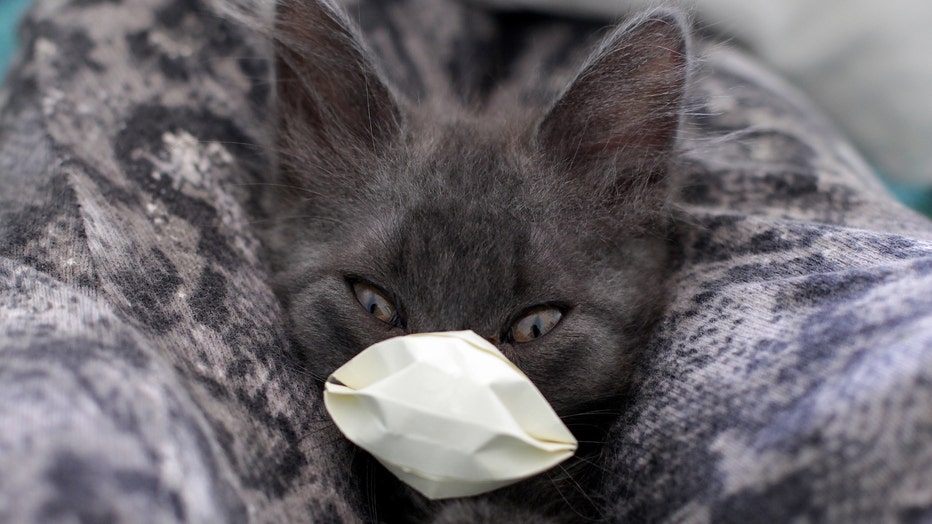 A cat with a protective mask in Buenos Aires, Argentia, on April 7, 2020. Researchers from the Harbin Veterinary Research Institute discovered that cats are not only susceptible to contracting COVID-19, but can also transmit it to other cats. Argenti

Still, the CDC is recommending that people prevent their pets from interacting with people or animals outside their homes -- by keeping cats indoors and dogs out of dog parks, for instance.

Coronavirus testing for pets isn’t recommended unless an animal has been exposed to a person with COVID-19 or the animal has symptoms of the disease and tests have ruled out more common possible causes, said Dr. Jane Rooney of the USDA. Veterinarians who think testing is warranted are supposed to contact state officials to decide.

Barton Behravesh said the animal tests are done at veterinary labs and use different chemicals than human tests, which have been in short supply during the crisis.

For most people, the coronavirus causes mild or moderate symptoms, such as a fever and cough that clear up in two to three weeks. For some, especially older adults and people, it can cause more severe illness, including pneumonia, and can be fatal.

The two cats live in different parts of the state; the USDA and CDC wouldn’t say where specifically.

The first cat fell ill about a week after a person in its household had a short respiratory illness, though it wasn’t confirmed to be COVID-19, Barton Behravesh said. The animal goes outdoors at times and might have come into contact with an infected person in the area, she said.

The second cat’s owner tested positive for COVID-19 before the cat became sick, officials said. Another cat in the same home hasn’t shown any signs of illness.

The agencies have recommended that any pet owners with COVID-19 avoid contact with their animals as much as possible, including wearing a face covering while caring for them.

There have been a handful of reports outside the U.S. of pet dogs or cats becoming infected after close contact with contagious people, including a Hong Kong dog that tested positive for a low level of the pathogen in February and early March. Hong Kong agriculture authorities concluded that pet dogs and cats couldn’t pass the virus to human beings but could test positive if exposed by their owners.

A tiger at the Bronx Zoo had what was believed to be the first confirmed coronavirus case in an animal in the U.S. or a tiger anywhere. The 4-year-old Malayan tiger, named Nadia, started showing signs of illness on March 27, 11 days after the zoo closed because of the virus.

Three other tigers and three lions later showing symptoms. All have been recovering.

Zoo officials said they believe the animals were exposed by one or more keepers who had the virus but weren’t showing symptoms at the time.