Caitlyn Wertenberger’s tuxedo cat Piper had been missing for nearly a month before she was found trapped inside the neighbor's chimney, likely for several days.

UNION GAP, Wash. - Caitlyn Wertenberger, of Union Gap, Washington, was relieved, yet perplexed when her stout tuxedo cat Piper was found trapped in her neighbor’s chimney after being missing for nearly a month.

Piper, or "Pipes" as she’s lovingly called, doesn’t usually go out for long periods, but there is a doggy door for her to come and go.

Wertenberger said Piper likes to go on the roof sometimes and she has used a laundry basket to help the 19-pound cat get down safely. But she could not have imagined that the poor kitty would find herself trapped in a chimney.

When Piper didn’t come home on Feb. 24, Wertenberger immediately knew something was wrong. Nearly 28 days later, the 6-year-old cat was discovered trapped in the neighbor’s chimney.

Wertenberger spent nearly a month handing out fliers and investigating her missing cat’s disappearance, never giving up hope of finding her companion.

"Piper is literally my best friend, we were out there looking almost every day. I didn’t want to get my hops up too much, but I couldn't believe she was permanently gone," she said. 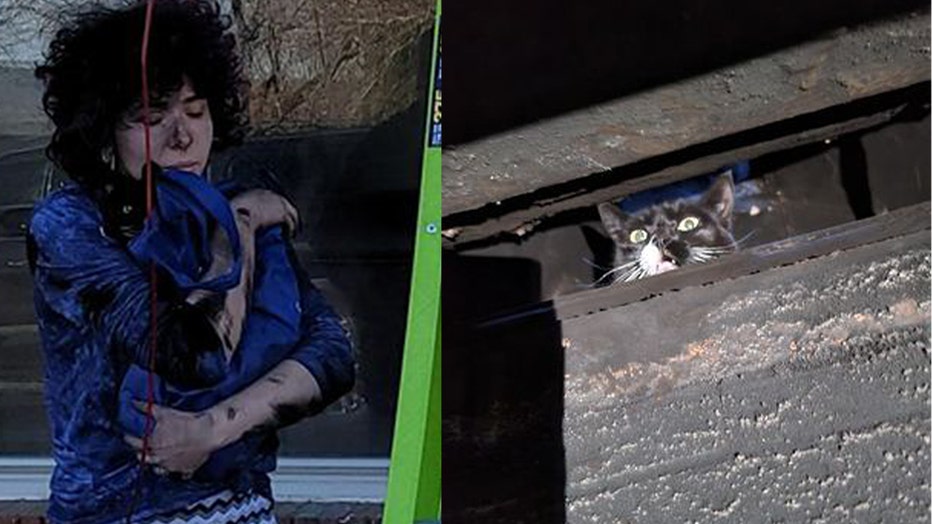 Wertenberger said the house next to hers was being remodeled and the neighbors said they heard meows for about five days, but didn’t think there was anything wrong.

"The tenants had heard meowing for a couple of days (4-5ish) but they have a cat themselves, so they kind of just disregarded it,"  Wertenberger recalled.

After Piper’s calls for help persisted, the neighbors were finally able to pinpoint the sound to the chimney at approximately 4 a.m. on March 24.

Piper was difficult to see at first and covered in soot, but the neighbors were tipped off by the fliers Wertenberger had given out in hopes of finding her missing feline.

The neighbors immediately alerted her that they had found the missing cat.

"Once she saw me, the meowing really started," Wertenberger said.

She called her dad to assist in the rescue. He used a dog collar attached to a cable and fabric bags, which Piper loves to nestle in, to nab her.

"Originally we were going to have a brick mason come out and just pull some bricks, but my dad always has an idea," Wertenberger recalled.

She wasn’t sure exactly how long Piper had been trapped in the chimney, but in the time she was missing, she has slimmed down from a portly 19 pounds to 12 pounds. 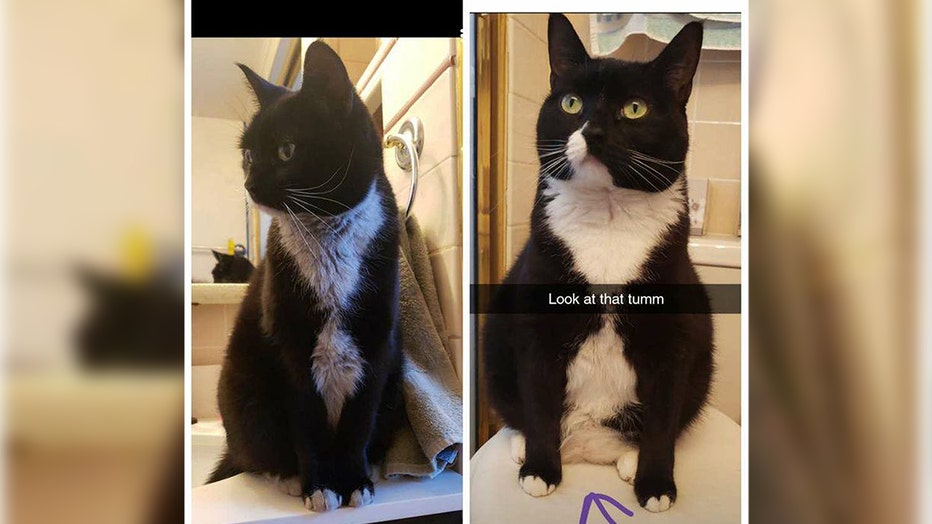 Piper photographed after being rescued from the chimney (left) next to Piper before going missing (right).

"She had no access to food or water more than likely that whole time, it rained like once," Wertenberger said. Luckily, the story had a happy ending, and Piper is currently safe and sound and only slightly traumatized. "I've been saying she has one big life event now, she's officially seen some things," Wertenberger said.