In a letter to president Trump, the members of Congress cite hundreds of Miller’s emails that were made public last week that they believe establish Miller as a white nationalist and conspiracy theorist.

WASHINGTON - More than 100 members of Congress are calling on President Donald Trump to fire White House Senior Adviser Stephen Miller from the administration, citing hundreds of Miller’s emails that were made public last week that they believe establish Miller as a white nationalist and conspiracy theorist.

Rep. Don Beyer, D-Va., tweeted out a copy of the letter that 107 members of Congress signed calling for Miller’s firing.

“We formally request that you immediately remove White House Senior Adviser Stephen Miller from your administration,” the letter begins. “A documented white nationalist has no place in any presidential administration, and especially not in such an influential position.”

The letter cites numerous emails sent by Miller to conservative news site Breitbart that were made public last week that “clearly establish” Miller as an “avid white nationalist and conspiracy theorist.”

These emails were analyzed by the Southern Poverty Law Center’s Hatewatch blog, and the organization said that 80 percent of the more than 900 emails written by Miller referenced race or immigration directly, and that none of them contained “examples of Miller writing sympathetically or even in neutral tones about any person who is non-white or foreign-born.”

The SPLC has published some of Miller’s emails in the first of what the organization says will be a series about the Miller emails.

The SPLC said that the published emails showcase the anti-immigrant ideology that many believe informed Miller’s policies while serving the Trump administration.

“These policies include reportedly setting arrest quotas for undocumented immigrants, an executive order effectively banning immigration from five Muslim-majority countries and a policy of family separation at refugee resettlement facilities that the Department of Health and Human Services’ Office of Inspector General said is causing 'intense trauma' in children," according to SPLC.

"Have you thought about going to Amazon and finding the commie flags and then doing a story on that?" Miller wrote, according to the published emails.

While responding to a question about whether a hurricane would drive migration from Mexico, Miller wrote that it "100 percent" would and migrants would receive temporary protected status, or TPS. "That needs to be the weekend's BIG story. TPS is everything," Miller wrote. Miller then sent a link from VDARE, an anti-immigration website that has published work by white nationalists. The article focused on instances in which the United States offered refugees temporary protected status, the SPLC said. 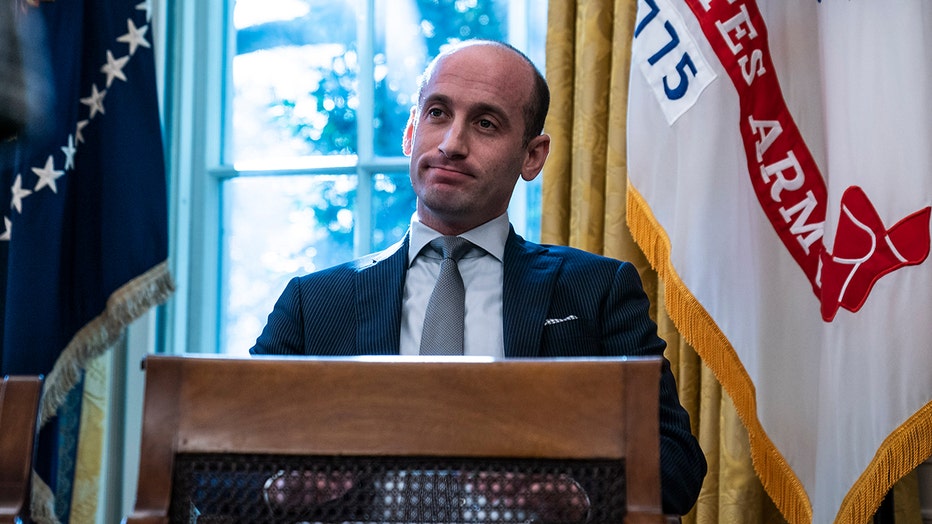 "Americans should be terrified by the casual way that Stephen Miller, who has enormous influence in the White House, shares racist content and speaks the language of white nationalists in emails to people he apparently considered fellow travelers," Michael Edison Hayden of Hatewatch said in a news release.

White House Press Secretary Stephanie Grisham said officials had not seen the report but lashed out at the Southern Poverty Law Center's credibility.

"They libel, slander and defame conservatives for a living. They are beneath public discussion," Grisham said.But 107 members of Congress are standing firmly by the SPLC’s analysis.

“We refuse to tolerate white nationalism and xenophobia in the White House or elsewhere in the United States,” their letter concludes. “Mr. Miller must be fired immediately.”