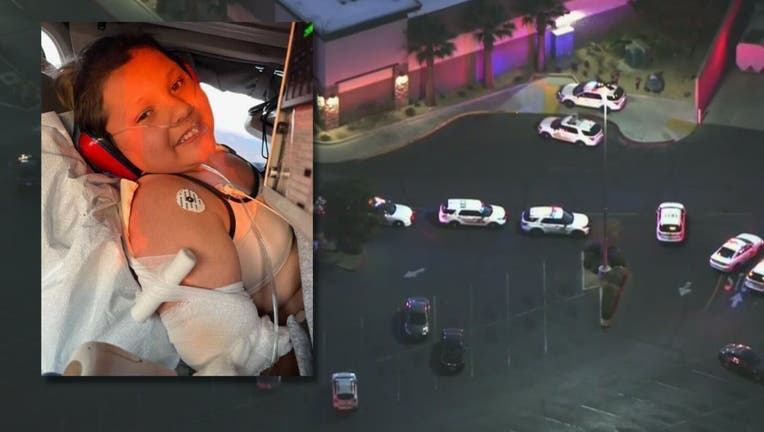 VICTORVILLE, Calif. - A store owner has been arrested for attempted murder in connection with the shooting of a 9-year-old girl at a mall in Victorville. The owner was reportedly shooting at suspected shoplifters when he struck the girl with a stray bullet, investigators said Wednesday.

The San Bernardino County Sheriff's Department responded to a call from the Mall of Victor Valley at around 6:30 p.m. Tuesday. According to the girl's family, 9-year-old Ava and her family were getting ready to take pictures with the mall's Easter Bunny ahead of the holiday weekend.

As they were about to take their picture, gunfire rang out inside the crowded mall, leaving the young girl with multiple bullet wounds and a broken arm.

Cockrell ran from the scene after the shooting, investigators said.

The girl was taken to a hospital where she continues to recover from her injuries sustained in the shooting. She was struck by three bullets, one of which shattered a bone in her arm.

Nevada Highway Patrol located Cockrell in his vehicle at about 9 p.m. Tuesday night and took him into custody.

He was booked into the Clark County Jail on an extraditable warrant, for attempted murder, in the amount of $1,000,000.

No other injuries were reported in the shooting.

The girl's mother told FOX 11 Wednesday morning she was in a lot of pain. A GoFundMe has been set up to help with her medical expenses.

Anyone with information about this investigation was asked to contact the Victorville Police Department at 760-241-2911 or Sheriff’s Dispatch at 760-956-5001.

The news of Tuesday's shooting comes months after a shooting was reported near – not at – the mall. The shooting from November 19, 2021, near the mall left one person dead and two others hurt at the time.

PREVIOUS COVERAGE: 1 dead, 2 others hurt in shooting near The Mall of Victor Valley