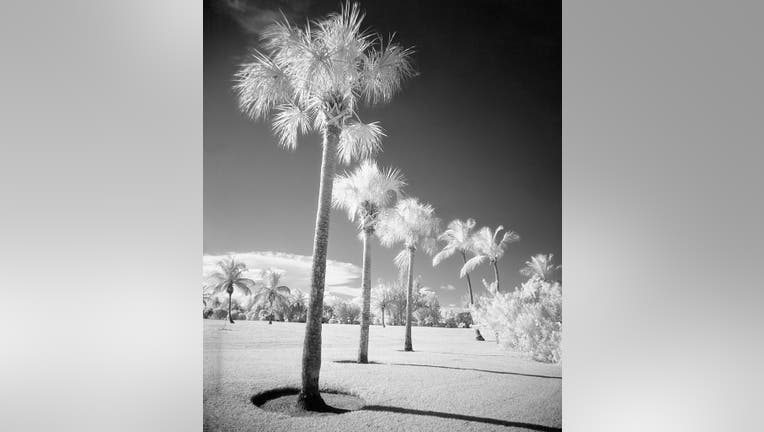 (Original Caption) Palm trees at Miami Beach take on a snow-covered appearance as does the rest of the foliage, in this infrared photo of the tropical splendor around the famous resort. The unusual picture provides for Florida residents one of the fe

MIAMI - It was a day for the record books and probably one that could happen again under the right circumstances.

When snow fell over South Florida 45 years ago for the first time, the news pushed President Jimmy Carter's inauguration out of the headlines. It was a rare phenomenon that was unheard of at that time.

Snow was seen across southeastern Florida as far south as Homestead and even on Miami Beach on Jan. 19, 1977, after a strong arctic cold front raced down the Florida Peninsula, the National Weather Service said.

Every reporting station in North and Central Florida recorded at least a trace of snow that day.

While the Miami International Airport did not observe the snowfall, the NWS said cooperative stations in Hollywood and the Royal Palm Ranger Station in far southern Miami-Dade County reported a trace of snow.

According to the NWS in Miami, Tampa measured 0.2 inches and Plant City, east of Tampa, measured up to 2 inches.

The NWS said West Palm Beach reported its first snowfall on record at 6:10 a.m. and continued to report light snow for two hours following. Before then, the farthest south that snow had ever been reported was in February 1899 along a Fort Myers-to-Fort Pierce line, the NWS said.

The NWS said that temperatures in some parts of South Florida were at or below freezing for 10 to 14 hours. Other locations were at or below 28 degrees for four to eight hours. Estimated totals from agricultural losses reached $350 million, and nearly three-dozen counties in Florida were pronounced disaster areas.

But contrary to some people's beliefs, snow in Florida is not as rare as you might think.

It is possible in far northern sections of the Peninsula and the Florida Panhandle, the NWS said. But for most of the Peninsula, especially Central and South Florida, it is a sporadic event.

FOX Weather's Senior Weather Producer and Meteorologist Greg Diamond said no climate site across the south had reported measurable snow since the 1977 event.

"Some people thought it was snowing two years ago, but it was not snow," Diamond said. "It was graupel."

Could it happen again? Sure, Diamond said, but it would take a historic arctic outbreak to do it.

"Even if it does snow, the probability of it sticking is even lower than in 1977 due to a larger urban heat island effect," Diamond said.

Temperatures in the lowest levels of the atmosphere may one day get cold enough to support snow. Still, Diamond pointed out it will be even harder for the highly populated East Coast urban areas in Florida to drop below the freezing mark as the massive increase in infrastructure retains heat more than the previous natural land.