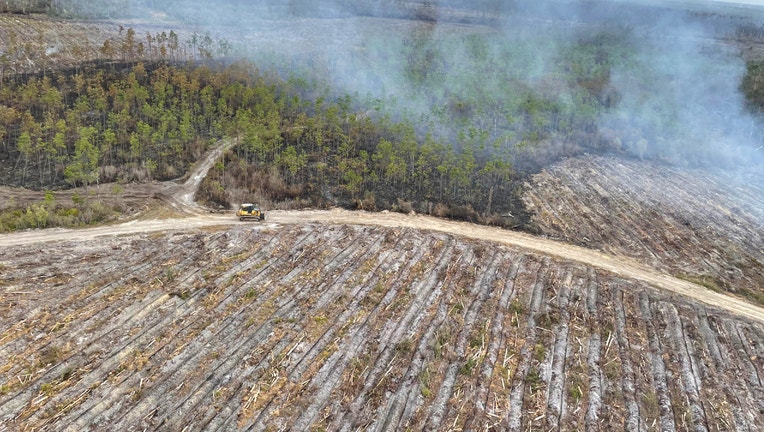 BAY COUNTY, Fla. - Conditions in the Florida Panhandle continue to improve for firefighters working to contain the Bertha Swamp Fire that has consumed more than 34,000 acres at its most intense.

The fires in Bay, Gulf and Calhoun started last week fueled by dry conditions that sparked blazes in the debris left by Hurricane Michael in 2018.

Since last Thursday, more than 36,000 acres have been burned across the Sunshine State. The large and unpredictable fires were a challenge because of winds last week, but after two days of significant rainfall, wildland firefighters have increased containment on the largest fire, the Bertha Swamp Fire.

After two additional wildfires broke out early in the firefight last week, the fires became known as the Chipola Complex Fires.

As of Friday morning, the Florida Forest Service Blue Incident Management Team confirmed that significant rainfall has continued to improve conditions for the Chipola Complex Fires. With those improvements, the team will transfer the incident back to the FFS Chipola Forestry Center.

The Bertha Swamp Road Fire, located in Gulf, Bay, and Calhoun counties, has consumed 33,131 acres and is now 60% contained. Firefighters have doubled the containment on the Bertha Fire in 24 hours.

The FFS Chipola Forestry said there wouldn't be any additional updates on these fires unless there are significant changes.

Burning bans remain in place in all three counties impacted by the wildfires.

As the fire threat improves, the threat of severe weather has arrived for the last three days in the Panhandle. According to the National Weather Service in Tallahassee, an additional rainfall of 4 to 6 inches is forecast over the Florida Big Bend. This significant rainfall will increase the threat of flooding in urban areas.

There is the threat of more severe weather and heavy rain across Florida on Tuesday and Wednesday.

Damaging winds are the main concern, but an isolated tornado cannot be ruled out.