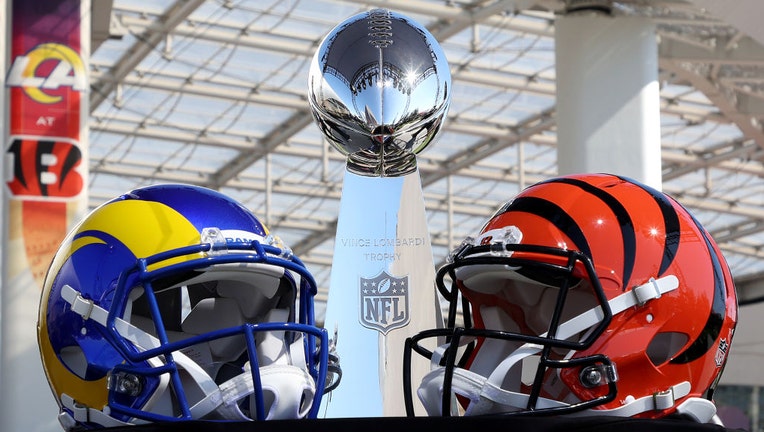 Helmets of the Los Angeles Rams and Cincinnati Bengals sit in front of the Lombardi Trophy. (Photo by Rob Carr/Getty Images)

WASHINGTON - And then there were two. On Sunday, Feb. 13, the Los Angeles Rams and the Cincinnati Bengals collide in Super Bowl LVI with a title on the line.

For a second consecutive year, the host city for Super Bowl LVI will have their home team playing. The Rams will be playing in SoFi Stadium as the home team when they take on the Bengals.

Here’s what you need to know about the matchup.

What’s at stake for the Rams and Bengals in Super Bowl LVI?

Bengals quarterback Joe Burrow and Rams QB Matthew Stafford will be the 10th and 11th QBs to start a Super Bowl after being drafted first overall, Stafford in 2009, Burrow in 2020.

This marks the second Super Bowl matchup of two former No. 1 pick quarterbacks, with Peyton Manning beating Cam Newton in 2015.

Stafford entered this postseason 0-1 in the playoffs. His lone playoff appearance came in 2011 when he was the QB for the Detroit Lions.

But he’s played exceptionally and has won three playoff games in a row, beating the Arizona Cardinals, defending champion Tampa Bay Buccaneers, and the San Francisco 49ers. He has a chance to win his first Super Bowl title if he can help lead the Rams to victory over the Bengals Sunday.

Joe Burrow #9 of the Cincinnati Bengals throws during practice in preparation for Super Bowl LVI at UCLA's Drake Stadium on February 09, 2022 in Los Angeles, California. The Bengals will play against the Los Angeles Rams in Super Bowl LVI on February 13.at (Photo by Ronald Martinez/Getty Images)

Burrow has led Cincinnati on an unprecedented playoff run. Cincy won their first playoff game in 35 years when they defeated the Las Vegas Raiders. The Bengals then went on the road and beat the no. 1 seed Tennessee Titans and the no. 2 seed Kansas City Chiefs the following week.

Burrow in his second season as the starter after his first pro season was shortened by a knee injury. The Heisman Trophy winner has played great all postseason considering that he’s a year removed from tearing his ACL.

If the Bengals upset the Rams, Burrow would become the third quarterback in NFL history (Joe Montana and Joe Namath are the other two QBs) to win a college national championship and a Super Bowl.

Although both quarterbacks are going up against tough defenses, their individual performances will be watched closely.

All the pressure is on Stafford who is in his 13th season and seeking his first ring. Burrow is playing with nothing to lose because Cincinnati wasn’t expected to make it this far.

Both quarterbacks will play well, but the game will come down to which signal-caller makes the fewest mistakes in the critical moments, particularly the fourth quarter.

Donald and Miller are two of the NFL’s best defensive players. Cincinnati’s offensive line has to protect Burrow the entire game after the unit allowed nine sacks against the Tennessee Titans in the AFC Divisional Round.

Burrow is the first QB to make the Super Bowl after getting sacked the most times in the regular season. If Cincy’s offensive line can protect Burrow, I like their chances, but Donald and Miller will get to Burrow a few times in this game.

Kupp and Beckham Jr. have played well together this postseason, with OBJ having a career resurgence since joining Los Angeles. The Rams duo will face a Bengals secondary that has played well but will be in for a long night if they can’t contain Kupp and Beckham.

Rams WR Cooper Kupp has 2,333 yards receiving in the regular season and playoffs, the most in a season in NFL history.

This is one of the most anticipated one-on-one matchups in the Super Bowl. Rams cornerback Jalen Ramsey is one of the top defensive players in the NFL and Bengals rookie receiver Ja'Marr Chase is an emerging star.

Ramsey is a physical and fast corner with excellent coverage skills. He made his third All-Pro team after intercepting four passes.

The attention will be on the quarterbacks, but the team that can effectively run the ball may decide who wins the Super Bowl.

Bengals running back Joe Mixon could be a key factor in the game as a runner, receiver, and blocker. With pressure on Cincy’s O-line to protect Burrow, Mixon running effectively will be a big boost for the offense.

In the Bengals’ 27-24 AFC championship game win over the Kansas City Chiefs, he rushed for 88 yards on 21 carries and caught all three of his targets for another 27 yards. Mixon played well late in the game and in overtime.

Rams running back Cam Akers, like Mixon, is a dual threat as a runner and a receiver. The Bengals defensive line will look to pressure Stafford and force him into mistakes. But Akers’ play will be crucial for Stafford having time to throw the ball.

In July, Akers tore his right Achilles tendon, an injury that usually requires nine months of rehab. But he miraculously recovered and returned to the Rams' lineup in December.

Akers has played in the Rams' three playoff games, and started the past two. He has rushed for 151 yards on 54 carries, and rebounded from losing two fumbles in the divisional-round win at Tampa Bay. Akers also has five catches for 62 yards in the postseason, a testament to his dual-threat ability.

Rams TE Tyler Higbee (knee) and T Joseph Notebook (chest) are not expected to practice all week but haven't been ruled out for Sunday.

The Rams are 1-3 all-time in Super Bowls, while the Bengals have lost their only two trips. Sunday’s game also features the youngest coaching matchup (Rams coach Sean McVay and Bengals coach Zac Taylor) in Super Bowl history and the first time both coaches were younger than 40.

Taylor was on McVay’s staff in Los Angeles before he took the job in Cincinnati. Both coaches know each other well and this will be an interesting chess match.

Los Angeles is playing at home and is favored to win the game, but the Bengals are on an incredible hot streak in the playoffs.

The Rams have the more talented roster, but the Bengals have excellent pieces at the skill positions on offense to score with Los Angeles in a game that will be a track meet.

When and where is Super Bowl LVI?

The Super Bowl is one of the biggest sporting events in the nation. But what’s unique about this year’s big game is it’s happening at the same time as the Winter Olympics.

How can I watch Super Bowl LVI?

The game will be televised on NBC at 6:30 p.m. ET. For fans who don’t have cable, you can stream the game on NBC’s Peacock network. It will also be available for free on the NFL website/apps as well as Yahoo Sports. DirecTV Stream, Sling TV, Hulu with Live TV, YouTube TV and fuboTV also have NBC.

Super Bowl LVI could be the hottest ever

While Super Bowl Sunday won't be as hot as the rest of the week, high temperatures could reach 87, according to FOX 11's Soumada Khan.

FOX11 Los Angeles and the Associated Press contributed to this story