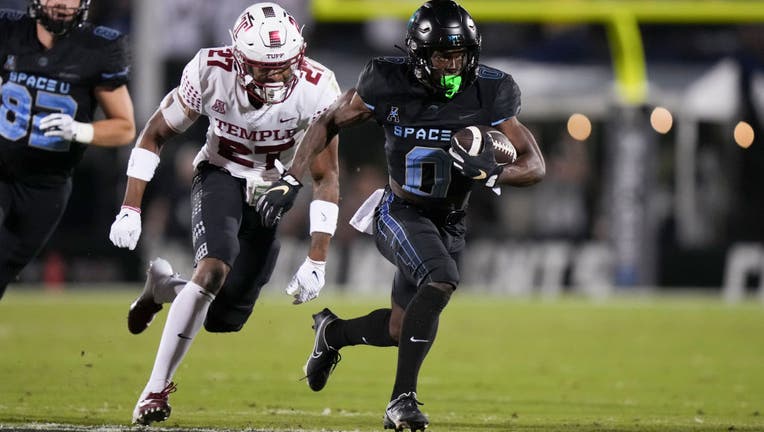 ORLANDO, FL - OCTOBER 13: UCF Knights running back Johnny Richardson (0) runs for a big gain as he is pursued by Temple Owls safety Elijah Deravil (27) during the game between the Temple Owls and the University of Central Florida (UCF) Knights on Thu

ORLANDO, Fla. (AP) - John Rhys Plumlee accounted for seven touchdowns to match a program record and led UCF to a 70-13 rout of Temple on Thursday night.

Plumlee threw for 373 yards and four touchdowns and added another 37 yards on the ground with three scores. All three short-yardage touchdown runs and a 25-yard TD pass to Kobe Hudson came in the first half as UCF (5-1, 2-0 American Athletic Conference) jumped out to a 35-13 halftime lead.

Plumlee hit Ryan O’Keefe with touchdown passes that included a 68-yarder on consecutive drives early in the third quarter. Plumlee added a 64-yard TD pass to Hudson that stretched the Knights’ lead to 56-13 about midway through the third.

Hudson finished with four catches for 121 yards receiving and O’Keefe had seven for 111.

The Knights honored their ties to the Kennedy Space Center, where roughly a third of its employees are UCF alumni, by rebranding as The Space U Citronauts for the game. They wore space-themed, all-black uniforms displaying a Canaveral blue "Space U" wordmark on the front of their jerseys. The Knights are 7-0 in spaced-themed games.

E.J. Warner completed 24 of 43 passes for 234 yards and a touchdown pass for Temple.