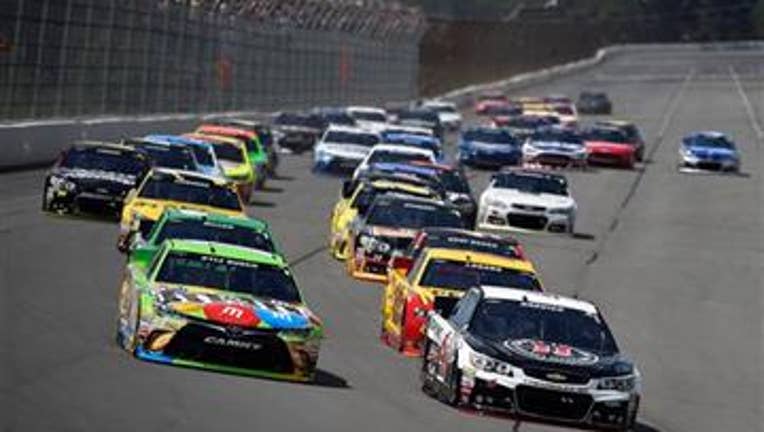 AVONDALE, Ariz. - Joey Logano's promising start to the afternoon fell apart with a slow, helpless slide though the field at ISM Raceway. Now he won't have the opportunity to defend his NASCAR title at Homestead.

The outcome would have been disappointing no matter how it happened.

It's even worse because he still doesn't understand why his No. 22 Ford suddenly failed him at the worst possible time.

"It stinks," Logano said. "I don't have the answer of what happened. I wish I did, I really want to know. But nobody has it right now."

Logano had one of the strongest cars in the field during the first half of the race, leading 93 laps and winning the second stage. But a few laps later after a pit stop and a restart, the 29-year-old quickly realized something was wrong.

He stayed in the lead for a few laps - helped by the cleaner air with no other cars around - but once the pack caught up Logano didn't have a chance.

Multiple cars blew past him as he hoped for a yellow flag that never materialized. By the time he came to pit road he had been knocked off the lead lap.

"It went from a really good car, to a car that couldn't stay on the lead lap after changing tires and a half pound of air," Logano said. "A lot of things don't line up there. That doesn't make any sense."

Logano was among the four drivers - including Ryan Blaney, Kyle Larson and Chase Elliott - who didn't advance to next week's championship round at Homestead. Denny Hamlin won on Sunday to leapfrog Logano for the final spot in the four-car championship round.

Logano's rough afternoon was also a rare disappointment for team owner Roger Penske, who made huge news earlier this week when he purchased Indianapolis Motor Speedway.

His teams this year won the Indianapolis 500, the IndyCar championship, the IMSA sports car championship and the V8 Supercars championship. Logano looked like he had a shot to join the fun, but NASCAR's top honor will belong to someone else this year.

"It hurts," Logano said. "It's not what you fight all year for, to go for fifth now."

Blaney had the best day of the playoff drivers who didn't advance to the championship. He was fairly strong all day, finishing third. A late caution gave him a chance to finally get past Hamlin, but he couldn't get a big push with two fresh tires on the final restart with three laps to go.

"I felt like I got an OK start," Blaney said. "It's really hard for the guy on the bottom on the front row to accelerate and turn down the hill. It's the way it's shaped. It's kind of tough, especially on two. But I don't know, you can always get a better start, right?

Elliott's day ended midway through the race after a crash. He said he thought he felt a tire go down and it led to a hard hit into the outside wall. The 23-year-old was running among the leaders before the accident.

Elliott was in good position to advance to the championship round before crashing early in last week's race at Texas. Already in a bad position coming to Arizona, Sunday's flat tire and crash ended any hope.

"These last three weeks have been pretty rough," Elliott said. "So, hopefully Homestead goes better, and we can get prepared good for next season."

Larson finished fourth on Sunday and - like Blaney - had a chance to get near the lead thanks to the late caution. But like everyone else, he couldn't find a way to get past Hamlin.