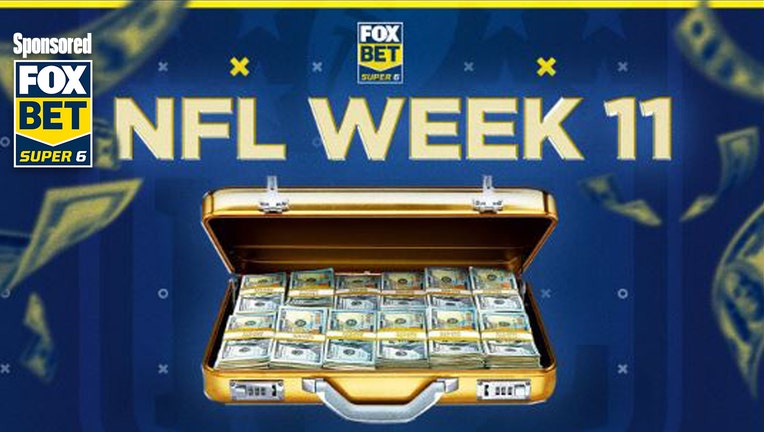 Terry Bradshaw is giving away $100,000 in the FOX Bet Super 6 NFL Sunday Challenge for Week 11. Find out how you can win this huge jackpot! (FOX Sports)

NFL Week 10 did not disappoint!

Aaron Rodgers and the Packers let the haters know that there's still life in Green Bay. The Vikings won a wacky one against the Bills in a game that literally could've gone either way. And the Lions got the cover and the win against the Bears despite Justin Fields having another epic game.

But do you know the best way to maximize a jam-packed weekend of thrilling NFL games? Get in on the action yourself!

Want to know how? Well, let us introduce you to the FOX Bet Super 6 contest and your chance to win Terry Bradshaw's money.

FOX Bet Super 6 is a free-to-play contest where you pick the winners of all six marquee games with their margins of victory for a chance to win $100,000 in our NFL Sunday Challenge. Just download the FOX Bet Super 6 app on your phone or mobile device, make your picks and submit your selections before Sunday’s games kick off.

You get the drift.

But before you download the FOX Bet Super 6 app and make your selections, dive into our picks for Week 11.

The Commanders keep coming up with ways to win games, even when most football fans and bettors have counted them out. They are 5-5 straight up (SU) this season and 5-4-1 against the spread (ATS), and that includes their 32-21 upset victory over the Eagles in the Monday Night Football Week 10 finale.

Washington's backup quarterback Taylor Heinicke and superstar wide receiver Terry McLaurin have established themselves as quite the successful tandem. Heinicke is 3-1 SU as a starter this season, and Scary Terry had 128 receiving yards in Washington's Week 10 win over the Eagles.

All this success without QB1 Carson Wentz in the lineup.

On the other side of the ball are the Texans. They are a miserable 1-7-1 SU. Do they even realize its football season?

And while we're asking the tough questions, does Washington really need Carson to come back? If Heinicke gets the start in Week 11, we like the Commanders to get the W.

Prediction:
Commanders by 8 to 10 points

This is a matchup between two of the most underwhelming teams in the NFL. Rams House has posted just three wins, proving every week that you need more than Gatorade to cure a Super Bowl hangover. And folks in Who Dat Nation are probably wondering who got a hold of their voodoo doll.

More importantly, you're probably wondering which of these awful squads you should back in Week 11. For that, we're going LA.

The Saints are 0-6 in their last six November matchups and currently have the worst turnover differential in the league. Don't get it twisted, though; the Rams don't look much better than NO. Especially considering that Los Angeles is dealing with injuries and ranks 31st in total offense.

Ultimately, this will be an ugly game. But it will be close.

Now the Bears, like the Rams and Saints, have only posted three wins. But Chicago, with its 3-7 record, has been a fun team to watch — win or lose.

Bears QB Justin Fields has been the star of Second City's spectacular show. His 325 rushing yards in his last two games are the most rushing yards by a quarterback in the NFL in a two-game span. This weekend, that Bears offense is meeting an Atlanta team whose total defense ranks 31st overall.

It's also worth noting that since 2000, the Bears are 6-3 SU when they've faced Atlanta.

Expect Justin Fields and the Bears to dial up the theatrics and walk out of the A with a victory.

Prediction:
Bears by 4 to 5 points

So Baker Mayfield is on track to make his return to the Panthers lineup as QB1 this weekend. Awesome!

Since that is the case, we're backing Baltimore.

And we're on the same wave as FOX Bet oddsmakers because they have the Ravens as 12.5-point favorites.

Baltimore ranks fourth in scoring offense and third in rushing defense in the NFL. And Ravens quarterback  Lamar Jackson is 14-1 in his 15 career starts against NFC opponents.

Also, the Baltimore Birds are on a three-game winning streak. Jackson & Co., it seems, have hit their stride, and what you don't want to be is on the other side of a red-hot Lamar.

Prediction:
Ravens by 14 to 17 points

The Lions are a strange, sneaky beast. They only have three wins this season, but they're 5-4 against the spread. So at least when it comes to covering, backing Detroit has been profitable for bettors.

The Giants are 7-2 SU, so betting on New York's moneyline has also fattened a few wallets. But don't look now, Giants fans. You all have the toughest schedule left to play in the NFL. Their remaining opponents have a combined 63% win percentage. But their offense should be up for that challenge.

Daniel Jones has not thrown an interception in six straight games, and running back Saquon Barkley leads the league with 931 rushing yards.

All of the Giants' wins this year have come by one score or less. So we like NY, but considering how close their wins have been and knowing that the Lions like to cover, this one will be tight.

Prediction:
Giants by 1 to 2 points

Can we vote no on both of these teams? It's like choosing between chopped liver and spoiled cottage cheese. You can slice it or dice it any way you please, but it's all bad, and it all stinks.

But we're going with the 2.5-point underdog Raiders here.

Las Vegas has already defeated Denver once this season. When the two teams met in Week 4, the Raiders won 32-23. Including that game, they've won five straight against the Broncos. Since 2016, LV is 9-4 SU when facing Denver.

And we all saw how emotional Derek Carr got in his post-game presser after losing to Jeff "No Coaching Experience" Saturday and the Colts. Losing a game like that is enough to make you come out and play at 110% effort the following week.

Trust us. We're holding our nose, too, but Las Vegas gets the win here.

Now, it's your turn to jump in and win some money!

After you download the app and submit your selections for the upcoming contest, be sure to share your picks with us by tagging @FOXSuper6 and @EricaReneeD and use the #EricaSuper6 hashtag across all social media platforms.