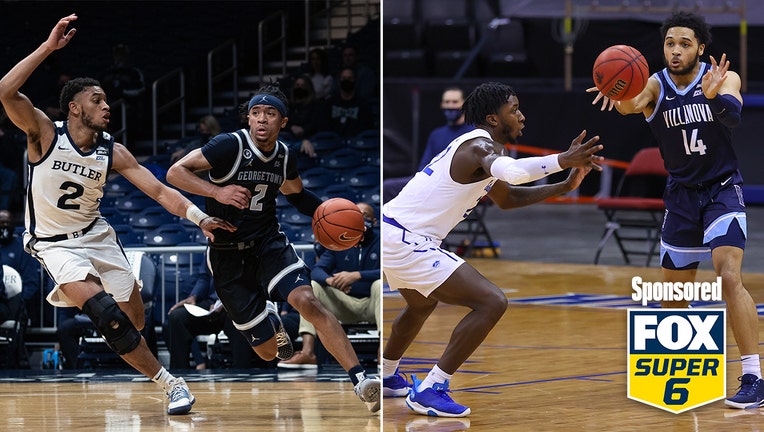 The best part about conference championship week for the college basketball fan is the idea that you can never get enough.

From the time lunch is served on the East Coast on Thursday until your head hits the pillow Sunday evening, there is a smorgasbord of college basketball games to consume.

The Big East tournament has always been in the middle of that mix, and this year is no exception. Games tip-off at 12 p.m. ET Thursday, running all day long on FS1. And you can get into the action by playing FOX Super 6 for your chance to win $1,000 every round until the championship, when the prize grows even larger. All you have to do is download the FOX Super 6 app and answer six questions about each day of the conference tournament – all absolutely for free.

It’s important to keep up to date on the storylines as Thursday dawns in the Big East and the quarterfinals tip-off at noon Eastern. Here are six things to keep an eye on as the tourney gets into full gear to get you set to make your picks.

1. What exactly is Villanova right now?

But the loss of tri-Big East player of the year Collin Gillespie (torn MCL) for the season along with the injury to third-leading scorer Justin Moore (ankle – doubtful for the Big East tournament) changes everything. Jeremiah Robinson-Earl is the best NBA prospect on the roster and could go in the first round of this year’s draft. However, this team's having to bounce back from the losses of Gillespie and Moore within the span of a week makes this tournament wide open. Georgetown will be the first-round opponent, and it figures to be a tough out.

This will be a good test out of the gate to see if Villanova is what we’ve gotten to know them to be.

It seems too easy to say, "the winner is in, and the loser is out" from the Seton Hall/St. John’s game Thursday afternoon (2:30 p.m. FS1). However, that’s exactly the feeling you have with both teams firmly on the NCAA bubble.

Seton Hall has an incredible win at UConn a month ago that might keep its hopes alive after a late-season slide. But a second loss to St. John’s would likely sink the Pirates and send through the Red Storm, who have major quality wins against Villanova and at home.

These types of games, especially between locals at the Garden, can be outright blood wars.

3. Many happy returns for UConn?

The Huskies have loved the Garden over the years – especially under Jim Calhoun. This year, of all the teams in the conference, the Huskies might be playing the best after winning six of their final seven down the stretch to go from on the bubble to firmly in the NCAA Tournament.

James Bouknight is a monster for the Huskies, with 20.2 points a game. Getting DePaul in the late window (9 p.m.-ish ET) after the Blue Demons stunned Providence on Wednesday gives the Huskies a huge advantage.

Creighton has been a consistent force since it arrived in the Big East back in 2013 and would likely be considered in the top three in the conference since its arrival, behind Villanova (two national titles) and perhaps Xavier (an Elite Eight appearance). With an 18-6 record and a deep roster highlighted by All-Big East First Team guard Marcus Zegarowski, this might be the Bluejays' best shot at a Big East title.

However, it is fair to note that Butler – which advanced after stunning Xavier on Wednesday in overtime – has beaten Creighton this season. The Bulldogs did, however, lose to the Bluejays by 20 on Saturday in Omaha and have to hope the neutral court gives them an edge.

For a conference that had big blood to it dating to the Patrick Ewing days, a steady trend has emerged: The teams that shoot 3-pointers the best end up moving forward. Villanova is the best example of this, but Creighton's and Seton Hall’s ability over the years to bomb away from the outside has been huge.

While the old Big East used the big man and the cutters inside, it is now the land of the 3.

6. How will the (mostly) empty building play?

The Big East’s charm was always that it reflected the city it played in: big, loud, tough and maybe a little obnoxious. Sessions that might look half-filled always sounded like an airport hangar when the engines get revving.

There will be only 1,000 fans in the Garden for each game this time around – mainly parents and family of players and coaches. Will the intensity suffer? With so much on the line for a lot of teams, they better hope not.

Play the FOX Super 6 Challenge for college basketball throughout the conference tournaments and March Madness for your chance to win thousands of dollars, absolutely for free. Just download the FOX Super 6 app now, and make your picks!