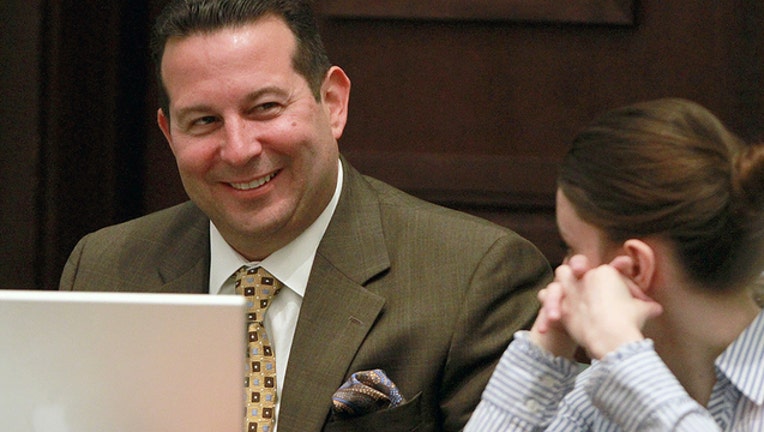 Defense attorney Jose Baez, left, smiles before the start of court in the trail of his client Casey Anthony, right, at the Orange County Courthouse on Tuesday, June 7, 2011. (Joe Burbank, Orlando Sentinel)

Weinstein's four new lawyers all have experience defending high-profile clients, including Casey Anthony, former sports stars Aaron Hernandez and Kobe Bryant and, in a strange twist, one of Weinstein's own Hollywood accusers.

Two of the attorneys, Jose Baez and Ronald Sullivan, represented actress Rose McGowan last year in a Virginia drug case. McGowan, who pleaded no contest last week, was among the first of dozens of women who came forward to accuse Weinstein of sexual assault.

The pair join Bryant's former lawyer Pamela Robillard Mackey and ex-Manhattan prosecutor Duncan Levin in representing Weinstein on what's shaping up to be a modern version of the "dream team" that secured an acquittal for O.J. Simpson at his 1995 murder trial.

The quartet of lawyers replaces Benjamin Brafman, a tactical and pugnacious New York City defense lawyer who had been by Weinstein's side since he was arrested and paraded out of a Manhattan police station last spring.

McGowan, who's not involved in the criminal case, blasted the involvement of her former attorneys as a "major conflict of interest."

"I knew there was shadiness going on behind the scenes," the "Charmed" star told The Daily Beast. "This is why my case didn't go to trial - my instinct was my lawyers had been bought off."

"I thought Harvey would get to them behind the scenes and I wouldn't have fair representation," McGowan added.

Baez and Sullivan said in a statement that McGowan's case had nothing to do with Weinstein and that they were certain there was no conflict.

"We were pleased to represent our former client, Ms. Rose McGowan, in a matter unrelated to Mr. Weinstein's current charges," the lawyers said. "After consultation with ethics counsel, we are certain no conflict of interest exists. We wish Ms. McGowan well with all her future endeavors."

Weinstein, 66, is charged with raping an unidentified female acquaintance in 2013 and performing a forcible sex act on a different woman in 2006. A conviction could put him in prison for the rest of his life.

Brafman and Weinstein said in a statement last week that they had "agreed to part ways amicably." Their split came a month after they lost a hard fought bid to get his sexual assault case thrown out.

Brafman and Weinstein are due in court Friday for a judge to formally sign off on the lawyer swap.

Baez, perhaps the best-known name on the new legal team, first gained fame for representing Anthony, the Florida mom whose televised trial in 2011 ended in an acquittal on charges accusing her of killing her young daughter.

Mackey, who's based in Denver, represented Bryant when the former basketball star was accused of raping a 19-year-old at a Colorado resort in 2003. The charges were dismissed when prosecutors said the accuser was no longer interested in testifying.

In a statement released through a Weinstein spokesman, Mackey said she is thrilled to work with her friends, Baez and Sullivan, and "as they said, Harvey Weinstein is innocent and we are here to exonerate him."

"Mr. Weinstein steadfastly maintains his innocence in this matter and we are looking forward to assisting Mr. Weinstein in his defense," Baez and Sullivan said.