WASHINGTON - Vice President Mike Pence is scheduled to receive a COVID-19 vaccine Friday on live television at the White House to "build confidence among the American people" about its safety and efficacy.

Pence will be joined by his wife, second lady Karen Pence, and Surgeon General Jerome Adams, who will both receive the vaccine as well. The vaccination is scheduled to take place at 8 a.m. ET.

The vice president, who heads the White House Coronavirus Task Force, toured a vaccine production facility this week and reiterated his confidence in the vaccine development.

"Be confident that we have cut red tape but we've cut no corners when it comes to the development of this vaccine," Pence said during the visit. "I look forward, in the days ahead, to receiving the vaccine myself and do so without hesitation." 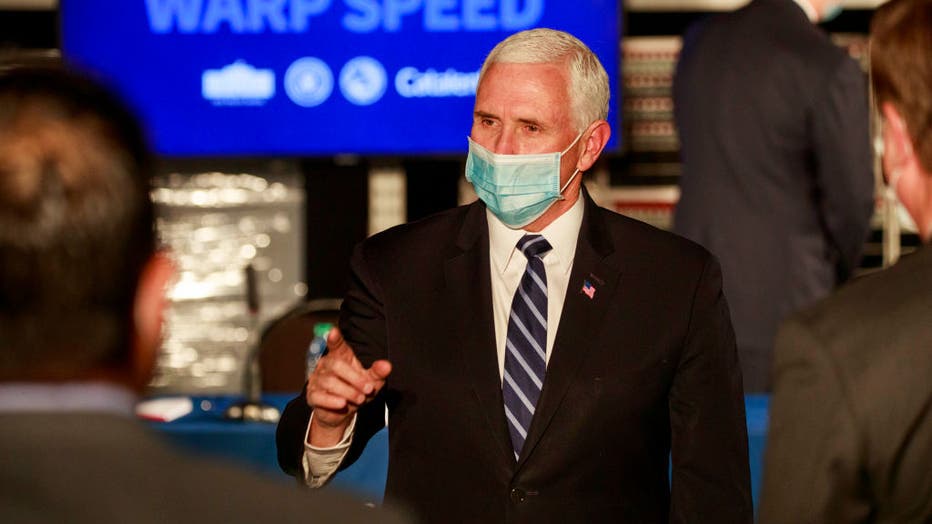 Vice President Mike Pence wearing a face mask speaks during a round table discussion at Catalent Biologics, where COVID--19 vaccine vials are being filled, in Bloomington, Indiana on Dec. 15, 2020. (Photo by Jeremy Hogan/SOPA Images/LightRocket via G

A survey from The Associated Press-NORC Center for Public Affairs Research found that only about half of Americans want to get the vaccine as soon as possible. Another quarter of the public isn't sure, while the remaining quarter say they aren’t interested. Some simply oppose vaccines in general. Others are concerned that the injections have been rushed and want to see how the rollout goes.

White House Press Secretary Kayleigh McEnany told reporters this week that President Donald Trump, who tested positive for the virus in October and recovered, is "absolutely open to taking the vaccine."

"He will receive the vaccine as soon as his medical team determines it’s best," McEnany said, stating that Trump’s priority is frontline workers and those in long-term care facilities.

Trump launched Operation Warp Speed — the government campaign to help swiftly develop and distribute vaccines — this spring with great fanfare in the White House Rose Garden. Pfizer-BioNTech received emergency use authorization from the FDA on Dec. 11, and amid its distribution, many have called for Trump to also get vaccinated publicly soon to help instill confidence in the shot.

"The President’s relatively low profile on the COVID response since the election is curious and counter to Mr. Trump’s own interests," Lawrence Gostin, a professor at Georgetown Law who focuses on public health, told the Associated Press.

Gostin, who has criticized Trump's handling of the pandemic in the past, said that he "deserves a great deal of credit" for Operation Warp Speed and placing a bet on two vaccines that use groundbreaking mRNA technology.

"Having exhibited leadership in the vaccines’ development, he should take great pride in publicly demonstrating his trust in COVID vaccines," Gostin added.

According to guidance from the Centers for Disease Control and Prevention, there is not yet enough information to determine whether those who have had COVID-19, like Trump, should get the vaccine.

"Even though the president himself was infected, and he has, likely, antibodies that likely would be protective, we’re not sure how long that protection lasts. So, to be doubly sure, I would recommend that he get vaccinated as well as the vice president," Fauci told ABC News.

It was not clear whether first lady Melania Trump, who came down with COVID-19 at the same time as her husband, would be vaccinated.

White House deputy press secretary Brian Morgenstern said Trump "will continue to update the country through a variety of means while giving medical professionals and hardworking staff at OWS the space to do their jobs and save lives."

World leaders who have tested positive for COVID-19

A growing list of world leaders have tested positive for COVID-19 since the onset of the outbreak. Here are some of the notable figures.

Fauci has also called on President-elect Joe Biden to get vaccinated for the coronavirus as soon as possible. Biden reiterated Tuesday that he would get the vaccine publicly, which he had previously committed to do.

"I want to just make sure we do it by the numbers. When I do it, you'll have notice, and we'll do it publicly," Biden told reporters.

House Speaker Nancy Pelosi and Senate Majority Leader Mitch McConnell both said Thursday that they will get vaccinated in the next few days. Three former presidents have also said they would be willing to take a coronavirus vaccine publicly to encourage all Americans to get inoculated against a disease that has already killed more than 305,000 people nationwide.