Spike Lee, acclaimed director of movies such as "BlackKkKlansman," "Malcolm X," and "Do The Right Thing," recently found out that he is related to one of the infantrymen who served with the "Buffalo Soldiers" who were the subject of a movie he directed in 2008.

Lee directed a movie based on the novel "Miracle at St. Anna" which was written by James McBride.

The book details the exploits of the 92nd Infantry Division called the "Buffalo Soldiers, the only African American infantry division in Europe during World War II, and the real-life massacre by the Nazis at Sant'Anna Di Stazzema, a small village in Tuscany, Italy, according to a Defense POW/MIA Accounting Agency (DPAA) news release.

Unbeknownst to Lee, the United States Army was able to discover in 2021 that Lee had a first cousin once removed, Maceo A. Walker, who was a private first class in the "Buffalo Soldiers."

"I didn’t know what to think," said Lee. "Is this a joke, or what? Because I want to really emphasize, my grandmother, my mother, my grandfather, no one ever talked about my grandfather having siblings."

Walker had gone missing until 1945 when he was killed during a battle near Cinquale Canal, the news release said.

"I had no idea till I got the letter!" Lee said. 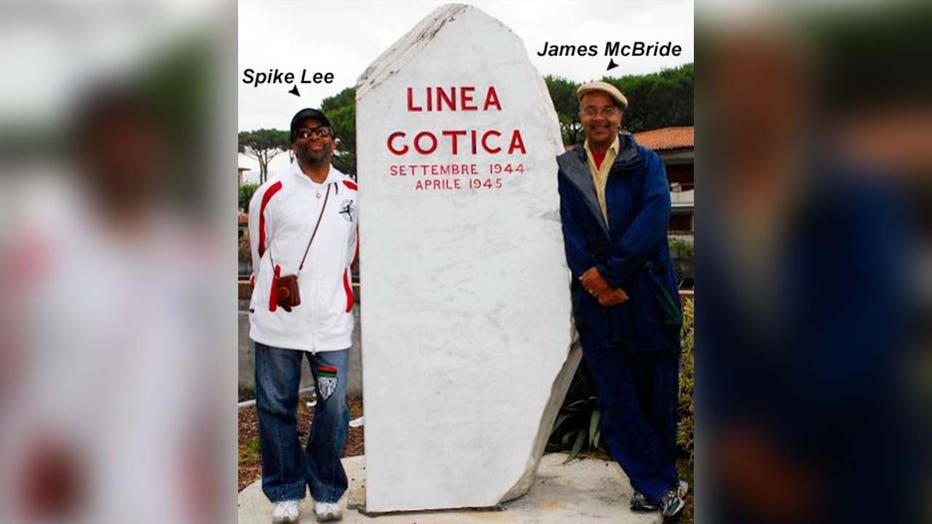 Lee and McBride teamed up with the goal to highlight Black soldiers who served bravely during WWII.

"The 92nd was… should be the most fabled black unit in World War II," said McBride. "It’s been overlooked by historians for years."

"I started researching black soldiers in Europe during World War II," McBride continued. "Of course, I came across the Tuskegee Airmen, but if you look a little bit deeper, I kept running into these stories about the men in the Serchio Valley who had done this and that and the other, and so I moved to Italy for six months and researched the book and that’s how I found out about the 92nd Division. It’s just an extraordinary story."

The "Buffalo Soldiers" were a segregated division, made up of primarily white senior officers and African American junior officers. The division "was sent in the summer of 1944 to the Gothic Line in the northern Apennine Mountains, Germany’s last major line of defense against the Allied forces pushing north up the Italian peninsula. They remained there throughout the winter with their one major operation – Operation FOURTH TERM – taking place in February 1945," the news release continued.

"To be in Italy, to do this film, to honor the 92nd Division and be in the area where this battle took place and my cousin, Pfc. Maceo A. Walker, died at 20 years old, that’s the spirits there," Lee said. "I can’t explain it any other way. It’s not just my cousin, but all of those brothers in 92nd Division, ‘Buffalo Soldiers,’ who fought for this country, who believed in this country, and came home to the United States and were still not full-class citizens."

Approximately 700 soldiers who were part of the 92nd Division were killed in Italy during the war. Lee, McBride and the DPAA have been working together to account for the 53 "Buffalo Soldiers" who are still missing.

"Only three have been identified since then. Six more sets of remains are at DPAA’s Offutt Air Force Base, Nebraska laboratory waiting to be identified. Most of the rest are thought to still be buried as Unknowns at one of the American Battle Monuments Commission’s cemeteries in Italy. Pfc. Maceo A. Walker is possibly one of those," the news release said.

"What this program I think is trying to do is it’s trying to show the families and show the country that we care about our own and that we want to unravel this stuff and that we’re willing to put the time and expense and money and expertise in it," McBride said. "Anything that brings this kind of history to the American public is good news, because we need to know our history so we can talk to each other now. While I wasn’t the originator of the story, I’m all in favor of it because it’s not really about just black soldiers. It’s about Americans not knowing their history. And if we can’t know our history, we won’t move forward."