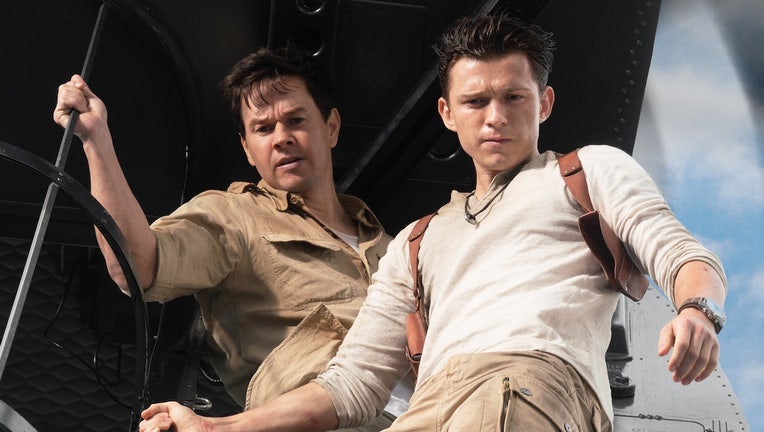 Chicago - Here’s the assorted loot you’ll find in the treasure chest of "Uncharted": Two slam-bang action setpieces, some lackluster plotting, a charming leading man turn from Tom Holland, an ensemble of wasted supporting players and a woefully miscast Mark Wahlberg. Does that add up to a hidden treasure or a disappointing haul? Well, that lies in the eyes of the fortune hunter.

"Uncharted" isn’t bad enough to be a bad movie, but not good enough to be a good one either. And for a highly anticipated video game adaptation that’s been in development for over 12 years (long enough for Wahlberg to have originally been cast as the young upstart rather than the mentor), that makes its long-awaited arrival a bit of an anticlimax.

About "Uncharted": An homage to every adventure movie ever made

For better or for worse, what "Uncharted" does succeed at is evoking other, more accomplished action-adventure movies. This is Bond meets "Indiana Jones" meets "Tomb Raider" meets "Pirates of the Caribbean," all heavily filtered through the history-based comedic banter of the "National Treasure" franchise.

There’s even a touch of the Tom Cruise classic "Cocktail" in there too. When we first meet Holland’s Nate Drake, he’s a full-time bartender, part-time pickpocket with charisma to spare. Soon enough, however, his small-scale crimes get a big-scale upgrade when he’s roped into a global-hopping adventure alongside Victor "Sully" Sullivan (Wahlberg), a selfish fortune hunter on a quest to find Magellan’s lost gold.

There’s ostensibly a personal connection at play too. The heart of the film hinges on Nate’s long-lost older brother Sam, who instilled a love of treasure hunting in his kid sibling before disappearing in the wind for 15 years. Sully claims he was friends with Sam and can help Nate find him if they locate the gold. But in a cutthroat world where everyone is just out for themselves, does Sully actually see Nate as a true teammate or just a pawn to be used? 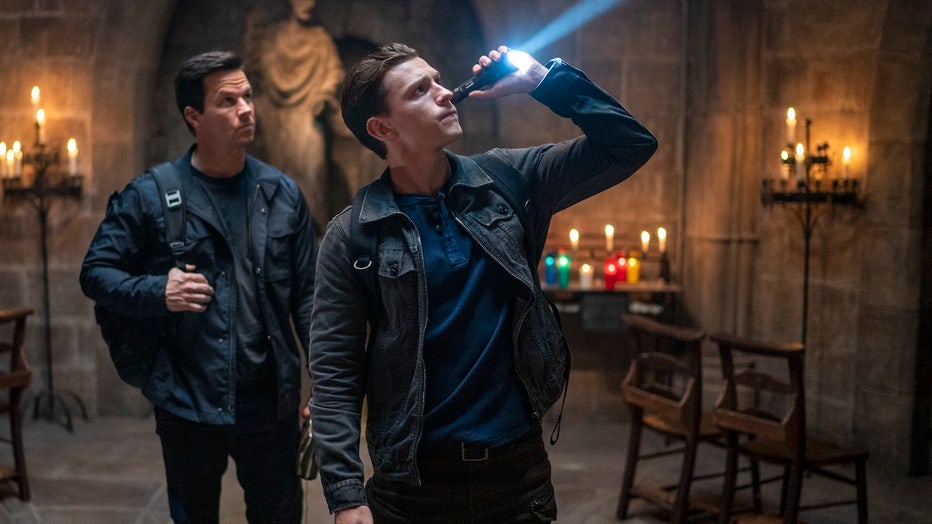 Of course, it’s hard to imagine anyone on Earth heading to see an "Uncharted" movie primarily for its emotional character drama, which is good because there isn’t really any — at least not any that’s successful.

In what could be a fun role for a game, grizzled actor, Wahlberg comes across more as one of the villain’s lunkheaded goons than a smart, self-possessed treasure hunter steeped in 16th century Spanish history. It’s as if the producers never told him whether he was filming a swashbuckling adventure, another "Transformers" movie or "Ted 3," so he just decided to lean into his usual comedic schtick to be safe. And while the film does sort of try to lampshade what an odd fit Wahlberg is for this world, that mostly just leads to cringe-worthy comedy masquerading as banter.

See "Uncharted" for: Tom Holland and the action

Holland, thankfully, fares a bit better — and not just because his "Spider-Man" training comes in handy for Nate’s parkour fighting style. Though this younger, origin story take on Nathan Drake might not entirely fit the vibe of the hit PlayStation video game series (this reviewer hasn’t played it), Holland succeeds at aging up his Peter Parker persona without diminishing its appeal. This version of Nate is a confident charmer who’s also just a little less cool than he thinks he is, a choice that underlines the lighthearted tone of the whole project. Holland is an actor with major "kid brother" energy, and "Uncharted" wisely leans into that even as Holland tries to launch himself as a bulked-up adult leading man.

Still, that’s not always enough to carry the movie in the (brief) stretches of downtime between its action scenes. The treasure hunting/heist plotting is about half as clever as it should be. And supporting players Sophia Ali (as reluctant ally treasure hunter Chloe Frazer) and Tati Gabrielle (as a sexy femme fatale mercenary enemy) are underserved by the material — although not as much as Antonio Banderas, who seems to have spent no more than two days filming his role as the film’s aristocratic big bad. 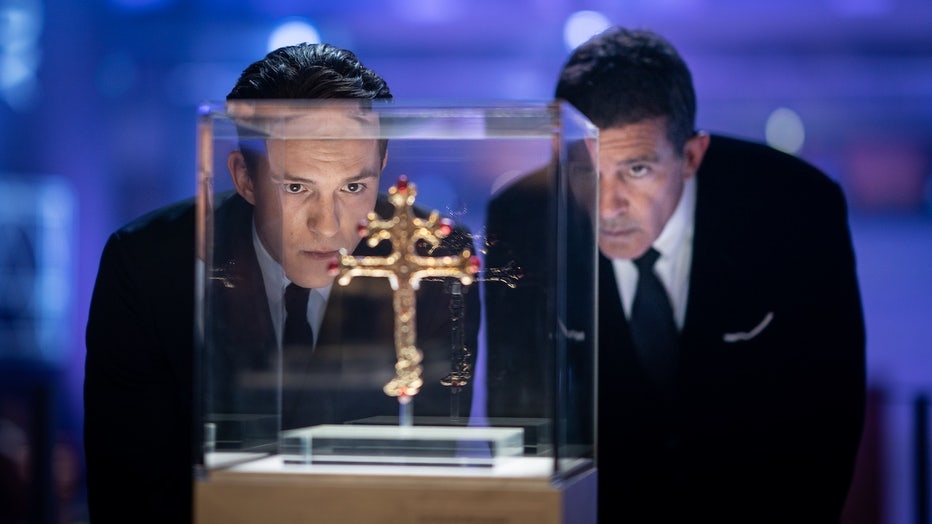 Yet just when "Uncharted" starts to become a slog, it throws in an action sequence that perks things up considerably. Yes, a lot of these setpieces come from the video game, and, yes, most of them have been spoiled by the film’s trailers. But for pure, dumb "turn off your brain and enjoy" fun, "Uncharted" has something to offer – particularly when it takes to the sky for its two biggest showstoppers.

RELATED: The essential onscreen superheroes of 2021

While one offers a demented sky-set riff on "Frogger," the other evokes "Peter Pan" in a wonderfully unexpected way. In an era where giant apes and massive superhero battles regularly fill our screens, it’s easy to take this kind of CGI spectacle for granted. But in its best moments, "Uncharted" succeeds at conjuring a sense of awe and creativity, if not exactly originality.

The film’s goofy, playful sense of self-awareness also works better in its action moments than its purely comedic ones. There’s winking fun to a climax that’s half helicopter chase, half old-fashioned swashbuckling swordfight, as old and new combine in a way that feels distinct to this world.

"Uncharted" isn’t great cinema. It’s not even great action-adventure cinema. But if there are better ways to spend two hours, well, there are worse ones too.

The Raid: Redemption (2012): Widely considered one of the greatest action movies of the 2010s, "The Raid: Redemption" (otherwise just known as "The Raid") follows an elite squad tasked with infiltrating a high-rise building run by a ruthless drug lord. Anchored by the Indonesian martial art of Pencak Silat and some creative staging in a limited setting, "The Raid" carves out a brutal action movie aesthetic all its own. Rated R. 100 minutes. Dir: Gareth Huw Evans. Language: Indonesian. Featuring: Iko Uwais, Joe Taslim, Doni Alamsyah, Yayan Ruhian, Pierre Gruno.

Crank (2006): "What if ‘Speed’ but inside a body instead of a bus?" That’s roughly the premise of "Crank," in which Jason Statham plays a British hitman who must maintain a constant flow of adrenaline in order to counteract a synthetic drug designed to kill him. Fights? Reckless driving? Ilegal drugs? Public sex? It’s all on the table in this ridiculously over-the-top action thriller that helped solidify the Stath’s action movie persona. Rated R. 87 minutes. Dir: Mark Neveldine and Brian Taylor. Also featuring Amy Smart, Jose Pablo Cantillo, Efren Ramirez, Dwight Yoakam.

Hardcore Henry (2016): "Hardcore Henry" isn’t based on a video game, but it replicates the gaming experience more directly than any proper adaptation of the past two decades. Filmed entirely in "first person shooter" mode (i.e. from the perspective of the protagonist), this sci-fi shoot-‘em-up delivers a creative riff on action filmmaking with a gimmick it’s hard to believe someone hadn’t tried before. Rated R. 96 minutes. Dir: Ilya Naishuller. Featuring: Sharlto Copley, Danila Kozlovsky, Haley Bennett, Andrei Dementiev, Darya Charusha.