Florida Gov. Ron DeSantis held a press conference Monday afternoon, saying he is issuing an executive order that would require mandatory 14-day self-isolation for anyone traveling to the Sunshine State from the New York City area.

ORLANDO, Fla. - The Transportation Security Administration says five of its agents out of Orlando have tested positive for the coronavirus.

She was the very first to test positive.

FOX 35 News asked her about the four others via phone.

"It’s upsetting. It seems like nobody cares about the safety of the employees or passengers. It’s upsetting," she said.

So if you’ve been to the airport and think you may have been infected, the first thing you should do is figure out what gate you were at. 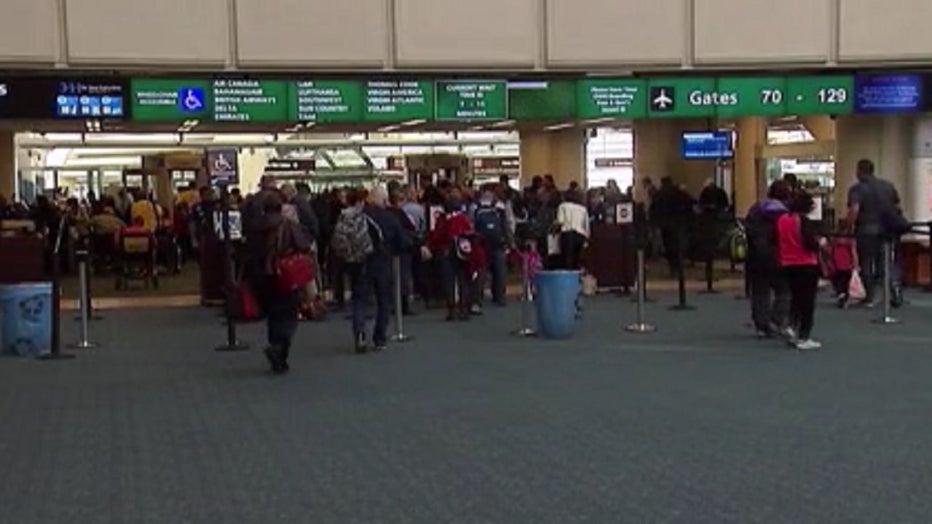 According to the TSA, the five agents tested positive between March 10 to March 16.

Four of them worked out of the west checkpoint during various hours.

And one was in the east checkpoint very early in the morning until the afternoon.

Here's a more specific list of dates and times:

Andrea said, "I think they need to shut the airport down. They’re putting everyone at risk."

Passenger Samatha Roberts said, "I think they probably should shut them down. I don’t know when, but it would probably be a good idea to close them for now."

"That would be devastating," she said. "It’s everywhere. Not much we can do about it. Still have places to go."

The Greater Orlando Airport Authority released this statement saying, “The decision to close the airport would have to come from the federal government and would have to include the coordination of agencies and airlines. The airport, itself, cannot choose to just close the door on their own."

Andrea says the TSA can’t track passengers who may have been infected.

"That would be the airlines that would know who went through. So, logistically that’s the only people that can contact them, but they should."

"I don’t know how long it takes to completely go away, but as soon as possible would be nice."

If you think you may have been exposed, call your doctor.

The TSA says all the agents are recovering at home.

Right now, JFK and MCO have the highest number of TSA agents with COVID-19, according to the TSA.