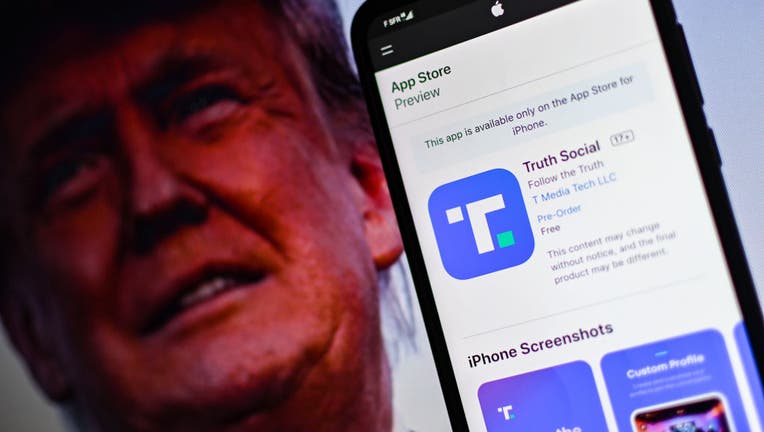 NEW YORK - Former President Donald Trump's social media app that he hopes will rival Twitter launched Monday as he seeks a new digital stage to rally his supporters and fight Big Tech limits on speech a year after he was banned from Twitter, Facebook and YouTube.

His Truth Social app was offered for download from the Apple App Store to a limited number of subscribers who had preordered, with others added to a waiting list to be given access over the next 10 days.

The site encountered technical glitches shortly after launch, with reports that subscribers were shut out for hours. Others had trouble signing on. The site is not expected to be open to anyone who wants to download it until next month.

"Due to massive demand, we have placed you on our waitlist," read a message some of those trying to access the platform, adding, "We love you."

Trump is hoping Truth Social will attract the millions who followed him on Twitter as he hints at a third presidential run, triggering a wave of other subscribers to justify the billions of dollars that investors have bet on the venture. Shares in a company that plans to buy Trump Media and Technology Group, the parent of Truth Social, have soared in recent months.

While fielding questions on the 20th anniversary of 9/11, former President Donald Trump again hinted he would seek the presidency in 2024.

Trump was banned from top social media platforms following the Jan. 6 Capitol riot last year that critics accused him of inciting. The ban has raised difficult questions of free speech in a social media industry dominated by few tech giants, an issue that Trump and conservative media have seized upon.

Republicans were quick to use the launch of Truth Social to raise money for their election efforts.

"After over A YEAR of muzzling by the Liberal Big Tech Tyrants: TRUMP. IS. BACK," wrote GOP House Minority Leader Kevin McCarthy in a fundraising email appeal Monday.

Groups like the Republican National Committee and the Congressional Leadership Fund also have been fundraising off the launch.

"Our main goal here is to give people their voice back," Trump Media CEO and former GOP Congressman Devin Nunes said Sunday on Fox News. He added that the app offers "the opposite of some Silicon Valley tech oligarch freak telling people what they want to think and deciding who can or cannot be on the platform."

Trump is hoping to tap into outrage over the social media bans to attract a broad audience to keep the stock rising — and possibly hand him hundreds of millions of dollars personally — but he faces significant challenges.

None of the alternative messaging platforms already open to public, such as Gettr and Parler, have been able to move beyond an echo chamber of conservative political commentary.

Trump's company, Trump Media, also faces financial hurdles. It has been promised nearly $300 million from a publicly-traded company that plans to merge with it and got pledges from dozens of private investors for an additional $1 billion to fund its operations, but it still needs approval from regulators for the deal before it can access the cash.

The company it hopes to merge with, Digital World Acquisition Corp., has said regulators are investigating following reports that it may have broken security rules last year by talking to Trump representatives about possibly joining forces before selling stock to the public. Digital World is a so-called blank-check company that is only allowed a quick path to going public without many disclosures if it has not identified a target to buy yet.

Another regulatory investigation is focused on possible stock trading violations earlier in the fall.

Stock is Digital World puts the value of its eventual merger target, Trump Media, at $10 billion.