People gathered in Houston, Texas on Monday, June 8 to pay their respects to Floyd.

HOUSTON - The last chance for the public to say goodbye to George Floyd drew thousands of mourners Monday to a church in his native Houston, as his death two weeks ago continues to stoke protests in America and beyond over racial injustice, and spurred France to abruptly halt the use of police choke holds.

Under the searing Texas heat at The Fountain of Praise church, mourners wearing T-shirts with Floyd's picture or the words “I Can't Breathe” — the phrase he said repeatedly while pinned down by a Minneapolis police officer — waited for hours to see Floyd's body, dressed in a brown suit in an open gold-colored casket. One man in line fainted, while others waiting sang “Lean on Me."

Some knew Floyd in the nearby housing projects where he grew up. Others traveled for hours or drove in from other states. Those who couldn't make it whipped up their own tributes: In Los Angeles, a funeral-style procession of cars inched through downtown as the viewing began in Houston. In Tennessee, residents of Memphis held a moment of silence.

Bracy Burnett approached Floyd's casket wearing a homemade denim face mask scrawled with “8:46" — the length of time prosecutors say Floyd, who was black, was pinned to the ground under a white officer’s knee before he died.

“All black people are not criminals. All white people are not racists. All cops are not bad. And ignorance comes in all colors. That’s what I thought about when I viewed the body," Burnett, 66, said.

Floyd's death on May 25 has inspired international protests and drawn new attention to the treatment of African Americans in the U.S. by police and the criminal justice system.

Hours into the viewing, a judge in Minneapolis kept bail at $1 million for Derek Chauvin, the police officer charged with second-degree murder in Floyd’s death. Chauvin, 44, said almost nothing during the 11-minute hearing while appearing on closed-circuit television from a maximum-security prison.

Two weeks after Floyd's death, the impact continued to resonate both at home and abroad.

In Paris, France’s top security official said police would no longer conduct choke holds that have been blamed for multiple cases of asphyxiation and have come under renewed criticism after Floyd’s death. And in Washington, Democrats in Congress proposed a sweeping overhaul of police oversight and procedures that would include a nationwide ban on choke holds in a potentially far-reaching legislative response to the mass protests denouncing the deaths of black Americans at the hands of law enforcement.

“With this happening to him, it’s going to make a difference in the world,” said Pam Robinson, who grew up with Floyd in Houston and handed out bottled water to mourners waiting outside the church. One man in the line, which had no shade, collapsed as temperatures spiked above 90 degrees and was taken by stretcher to a cooling station in front of the church.

Comill Adams said she drove more than seven hours from Oklahoma City with her family, including two children ages 8 and 10. They wore matching black T-shirts with “I Can’t Breathe” on the back — shirts she made up specially for the memorial.

“We had been watching the protests on TV. We’ve been at home feeling outraged. At times it brought us to tears,” Adams said. “The fact this one is causing change, we had to come be a part of it.”

Mourners were required to wear masks over fears of the coronavirus and stood 6 feet apart as they paused briefly to view the casket. On a stage behind the casket were two identical murals of Floyd wearing a black cap that read “Houston” and angel wings drawn behind him.

Republican Texas Gov. Greg Abbott was among the first to view the casket and planned to meet privately with the family. He wore a striped gold-and-crimson tie, the colors of Floyd's Houston high school, where Floyd was a standout football player.

“George Floyd is going to change the arc of the future of the United States. George Floyd has not died in vain. His life will be a living legacy about the way that America and Texas responds to this tragedy,” Abbott said.

The Minneapolis City Council has vowed to dismantle the city's 800-member police agency. And in Washington, House and Senate Democrats held a moment of silence at the Capitol’s Emancipation Hall before proposing legislative changes in policing oversight, reading Floyd's name and those of others killed during police interactions and kneeling for 8 minutes and 46 seconds — now a symbol of police brutality. 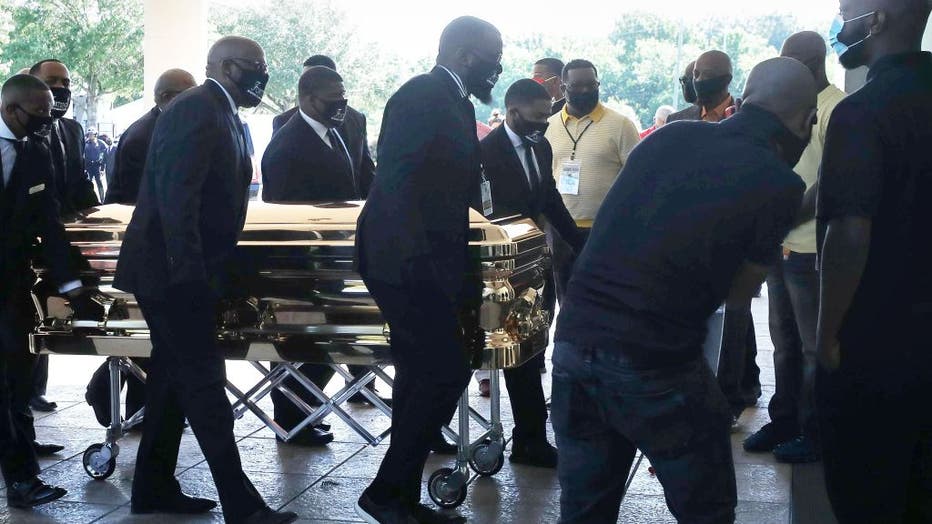 Pallbearers take the casket of George Floyd into the Fountain of Praise church for his memorial and funeral services on June 8, 2020 in Houston, Texas. (Photo by Mario Tama/Getty Images)

Besides banning police choke holds, the Justice in Policing Act would limit legal protections for police and create a national database of excessive-force incidents, according to an early draft. It is the most ambitious change to law enforcement sought by Congress in years.

Floyd’s funeral will be Tuesday, followed by burial at the Houston Memorial Gardens cemetery in suburban Pearland, where he will be laid to rest next to his mother, Larcenia Floyd.

Former Vice President Joe Biden was to travel to Houston to meet with Floyd’s family and will provide a video message for Floyd’s funeral service. Previous memorials have taken place in Minneapolis and Raeford, North Carolina, near where Floyd was born.

Cities imposed curfews as several protests last week were marred by spasms of arson, assaults and smash-and-grab raids on businesses. More than 10,000 people have been arrested around the country, according to reports tracked by The Associated Press.

But protests in recent days have been overwhelmingly peaceful — and over the weekend, several police departments appeared to retreat from aggressive tactics.

Several cities have lifted curfews, including Chicago and New York City, where the governor urged protesters to get tested for the coronavirus and to proceed with caution until they had as concerns have been raised that demonstrations could lead to an increase in virus cases.

Floyd was raised in Houston’s Third Ward, and moved to Minneapolis several years ago to seek work and a fresh start. His face now appears on a mural in his old neighborhood, and his name was chanted by tens of thousands last week at a protest and march in downtown Houston.