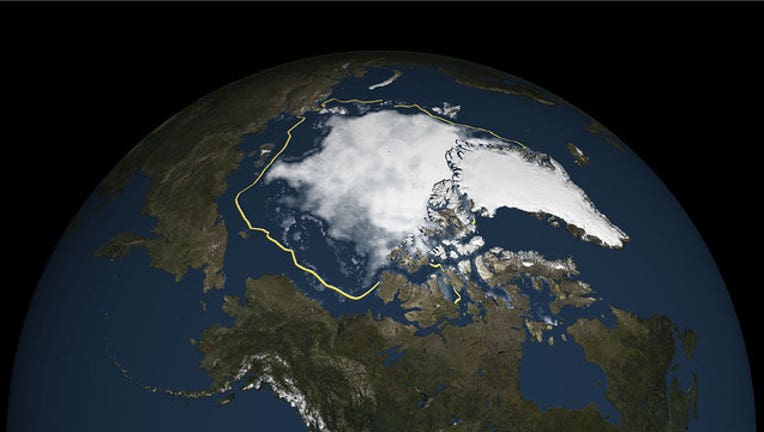 There has been a heat wave of sorts in the North Pole this week that might even have Santa trading in his sleigh for swim trunks.

Temperatures were as much as 50 degrees above average on Wednesday– almost reaching 32 degrees Fahrenheit in portions of the Arctic Circle that average 20 below zero at this time of year.

Meteorologists and experts at the National Oceanic and Atmospheric Administration blame the strange weather on winter cyclones over the Atlantic near Iceland that pushed warm air far up from the south. Another storm in the Arctic north of Greenland - helped by low-pressure system that also produced blizzards in New Mexico, tornadoes in Texas and flooding in Missouri - was also to blame.

“A series of cyclones lined up over the Arctic and North Pole to Iceland (where Cyclone Frank crossed),” Ryan Maue, a meteorologist for WeatherBell a private weather forecasting company based in NYC, told FoxNews.com by email.

“The combined flow at all levels of atmosphere was directed from the Atlantic over the Arctic and into Siberia,” he said. “Thus, warmer and moister marine air from Atlantic traveled over the Pole and raised temps to near or at freezing for a few hours.  However, the warm advection event was short lived and temps are closer to normal well below 0.”

James Overland, an Arctic climate researcher at NOAA’s research lab in Seattle, said it was the two storms together that really caused the freak weather.

“If you think of those two storm centers as kind of a dumbbell with the winds blowing around them, it brought all that warm air up from the Atlantic to near the North Pole,” he told FoxNews.com “One of the buoys shows slightly above freezing on Wednesday.”

Storms like this are typical in the Arctic for this time of year but such temperature swings are more unusual – about once in five years. Forecasters were careful not to single out any one cause for the strange weather such as El Nino or climate change, suggesting it’s a combination of factors that caused the temperature spike.

Related: In Alaska, Obama to ask for action against climate change in state dependent on oil

“I would say its rare event,” Overland said, adding that “in a lot of these extreme events that we see recently, there tends to be more than one factor contributing so they make it worse than if it was just one factor.”

“We tend to see more extreme events in the Arctic,” he said. “The Arctic was the warmest this last year as it’s ever been. There is so much random chaos in the weather that you can never say one event was caused by that. But the fact we are seeing more extreme events is a long-term change.”

The briefly balmy conditions alone are unlikely to cause any lasting damage in the Arctic. But scientists say it is only exemplifies the challenges facing a region that has been seeing record losses of ice including in 2015, due to rising temperatures around the globe.

Last month, NOAA reported that November Arctic sea ice was 360,000 square miles or 8.3 percent below the 1981-2010 average. This was the sixth smallest November extent since records began in 1979, according to analysis by the National Snow and Ice Data Center using data from NOAA and NASA.

“It is cold and dark in the Arctic so it will revert to its colder temperatures,” Overland said. “But every warm air moving into the Arctic keeps it from getting really cold like it used to. It has a minor, long-term effect, thinner ice and warmer temperatures overall.”