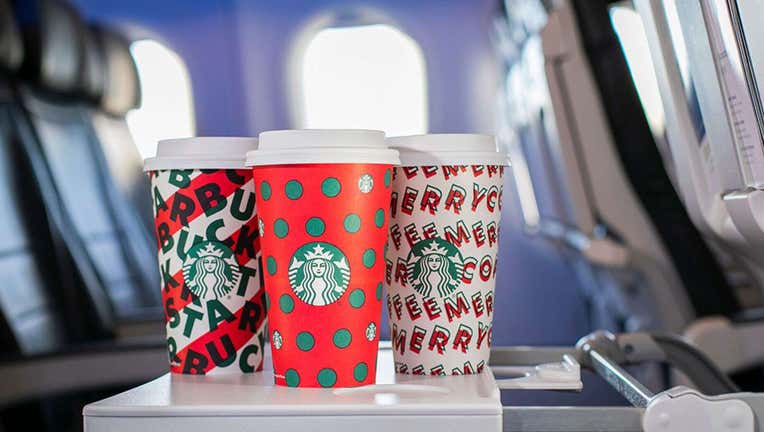 The carrier and coffee giant have teamed up for a limited-time promotion, allowing Alaska customers to receive priority boarding on flights between Nov. 7 and 10 if they hop on the aircraft with a Starbucks holiday cup in hand. (Ingrid Barrentine/Ala

FOX NEWS - Making that Starbucks run before your next Alaska Airlines flight might not such a bad idea, after all.

The carrier and coffee giant have teamed up for a limited-time promotion, allowing Alaska customers to receive priority boarding on flights between Nov. 7 and 10 if they hop on the aircraft with a Starbucks holiday cup in hand.

Describing Starbucks as their “hometown partner” in the collaboration, airline officials specified that anyone who boards with a hot or iced Starbucks drink served in a holiday cup can board their flight during the three-day period early with the special “espresso” line. Holiday cup-carriers, however, will board after first class passengers and those with special boarding designations, a press release explained.

Starbucks customers need not fret, however, if they simply can’t wait to sip during their trip. Alaska customers who carry either paper or reusable editions of this year’s holiday cups can still enjoy priority boarding if they finish the drink before getting on the plane.

Furthermore, passengers traveling through airports including San Francisco, Atlanta and Minneapolis-St. Paul – which are piloting compostable cups – can enjoy the early boarding perk with a holiday cup sleeve in lieu of a festive cup itself, the release detailed.

Though the “espresso” lane promotion will surely speed boarding along, some social media commenters were more skeptical of the deal.

“This is disappointing that you promote people to buy a 1 use cup (I thought you guys wanted to be a leader in sustainability?) Just for priority boarding. You could use that to promote reusable items instead,” one Twitter user said.

“Service members getting priority boarding? Absolutely. Buy a Starbucks for the same? No thank you Alaska Air,” another commenter offered.

On Thursday, Starbucks’s annual batch of hotly-anticipated holiday cups debuted in stores across the U.S. and Canada.

Inspired by a “typography” theme,” this year’s artwork includes “Polka Dots,” “Merry Dance,” “Merry Stripes” and “Candy Cane Stripe” motifs on the cups. The chain is also offering a limited-edition, reusable red cup, decked out in the words “Merry” and “Coffee.”

Though the cups are beginning to look a lot like Christmas, they do not name the holiday – which has stirred controversy in years past.