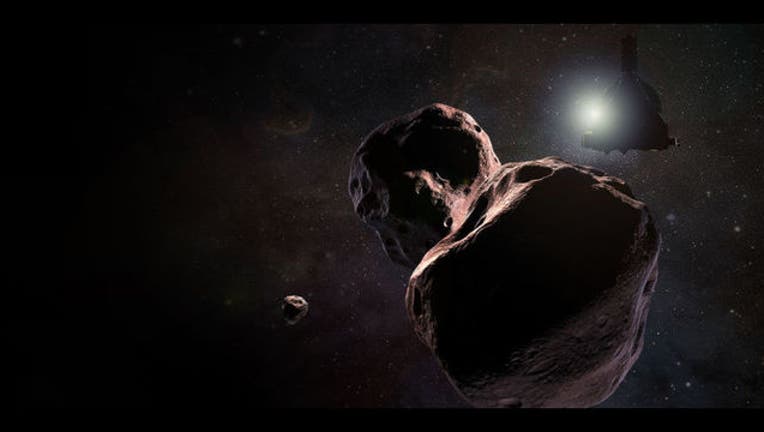 LOS ANGELES, Calif. - The spacecraft that whizzed past Pluto back in the summer of 2015 has continued travelling deep into our solar system and is ready to explore an even more distant and mysterious object on New Year’s Day.

If you recall, NASA’s New Horizons spacecraft gave us a plethora of beautiful and highly detailed close up images of Pluto like we’ve never seen before. During that flyby, we got to see a complex world with icy mountains and frozen plains. Shortly after the Pluto flyby, NASA received funding to continue the mission, allowing the spacecraft to travel another billion miles past our former ninth planet, deep into what is known as the Kuiper Belt.  It’s next mission was to fly past a rock officially called 2014 MU69 and nicknamed Ultima Thule.

Ultima Thule is a Kuiper Belt Object (KBO) located 4.1 billion miles from Earth in a cold asteroid belt where rocks are thought to be leftover remnants of the origins of our solar system. This area is so far from the sun, temperatures are just 35 degrees Kelvin above absolute zero. In temperatures that cold, the rocks have essentially been frozen in time for billions of years.

Alan Stern, principal investigator of the New Horizon’s mission, said, “It’s a big deal because we’re going 4 billion years into the past. Nothing that we’ve ever explored in the entire history of space exploration has been kept in this kind of deep freeze the way Ultima has.”

The irregular-shaped rock was first discovered using the Hubble Telescope in June 2014, long after New Horizons left Earth back in January 2006 when Pluto was still considered a planet. Scientists speculate that the object could be a binary system with two objects closely orbiting one another, or it could be two smaller bodies connected by a “neck” of rock. If it’s a single rock, it could be around 20 miles wide. If we find two rocks, they will most likely be 9 to 12 miles wide each.

The flyby of Ultima Thule is going to be quite the challenge, since the object is so small and difficult to track from Earth. Travelling beyond Pluto wasn’t the primary mission of the New Horizons spacecraft, so over the past 3 ½ years, the NASA team has been able to program and change the course of the spacecraft in order to make this possible.

History will be made as this flyby will make Ultima Thule the farthest object in the Solar System ever to be visited by a spacecraft.

The spacecraft will come within 2,100 miles of the KBO on its closest approach at 12:33 am EST January 1, 2019 – much closer than its flyby of Pluto which was around 7,700 miles -- and it will take more than 6 hours for the data to be transmitted through radio signals travelling at the speed of light to reach NASA’s Deep Space Network here on Earth.

The first close-up images of Ultima Thule will be arriving between 6:00 and 8:00 pm EST on January 1, and for the next two years the spacecraft will continue beaming back all the data it gathered in those few short seconds during the flyby.

What’s next for New Horizons after Pluto and Ultima Thule? It’s hard to tell, but at the very least the nuclear-powered spacecraft will continue to observe as much as it can, continuing to travel deeper into the Kuiper Belt.

If you’d like to follow the flyby of Ultima Thule, Sky Safari has released a free Pluto Safari App which provides news, photos, and an interactive guide to the close flyby (iOS | Android)

You can also watch when we receive data from New Horizons on the Deep Space Network website.