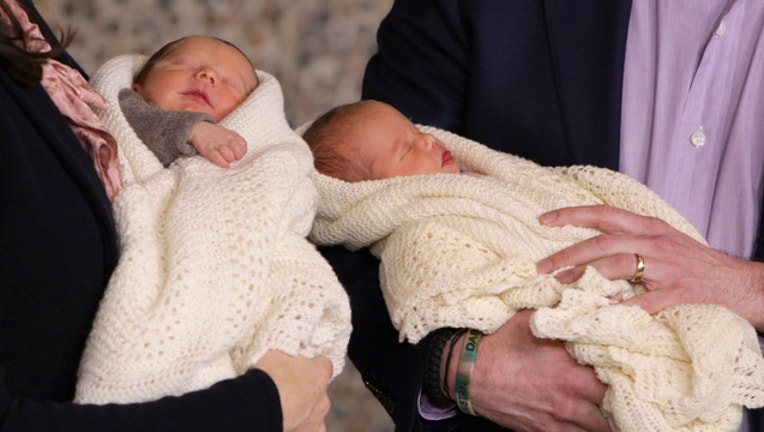 Princess Mary of Denmark and Crown Prince Frederik of Denmark hold their new-born baby twins, a girl and a boy, as they leave the Rigshospitalet on January 14, 2011 in Copenhagen, Denmark. (Photo by Chris Jackson/Getty Images)

WASHINGTON - Jackson and Sophia are the top baby boy and girl names of the year, according to BabyCenter.

Jackson leads the boys' list for the sixth year in a row, and Sophia tops the girls' list for the ninth year running, making it the decade-defining name for girls born in the 2010s.

New additions to the list include Layla for girls at number 10, and Oliver is at number nine for boys.

BabyCenter, a pregnancy and parenting digital resource, released their annual list on Tuesday.

"Sophia is the dominant girls' name of the decade, with no signs of slowing down," says Linda Murray, BabyCenter Global Editor in Chief.

"It has worldwide appeal, it's pronounceable in multiple languages, and it's feminine and sophisticated all at once. As for Jackson, it's a modern twist on the old classic Jack."

Millennial and Gen Z moms and dads found name inspiration in their passions and values in 2018. The names they chose evoke wildly varied topics, such as peace and spirituality, foods and flavors, the second Kardashian generation, and the online game Fortnite.

"Parents are inspired by the things they love as well as the sound of a name," says Murray. "In the past, we'd look to the Bible or royalty for name inspiration. Today's parents turn to other sources. We've had two decades plus of 'unique' names, and anything goes. It's not like the days when every other baby was named Jessica, Jason, or Jennifer."

And what are the biggest trends with baby names?

The stress of our go-go-go, always-on world has parents turning to Eastern spiritual practices like meditation and yoga, and re-centering their perspective on what matters most. They're choosing baby girl names like Peace (up 66 percent), Harmony (up 15 percent), Rainbow (up 26 percent), and Hope (up 10 percent). Parents of boys are increasingly interested in earth-friendly names like Ocean (up 31 percent) and Sky (up 38 percent).

Multiplayer survival game Fortnite has taken the gaming world by storm, attracting more than 125 million players in its first year. But it's not just 14-year-olds paying attention to the game – parents are playing, too, and sending game-inspired names up the charts. Ramirez, the name of a Fortnite character, jumped 57 percent. The names of the "skins" used to costume the characters also caught on. Consider Leviathan (up 46 percent for boys), Bunny (up 30 percent for girls), and Rogue (up 47 percent for girls and 21 percent for boys).

Names you can taste

Fixer Upper's Chip and Joanna Gaines left their HGTV megahit, but they're still setting trends in design, furniture … and baby names. Several of the Gaines family's names showed up in the Top 100 in 2018. Magnolia, the name of their business empire, is up 21 percent. And the names of their kids are also on the rise: Emmie (up 13 percent), Ella (up 8 percent), Drake (up 23 percent), and Crew (up 4 percent).

If finding the right baby name is hard, finding one you and your partner agree on is nearly impossible. However, BabyCenter's new app makes it easy to find names you love and share them with your partner.