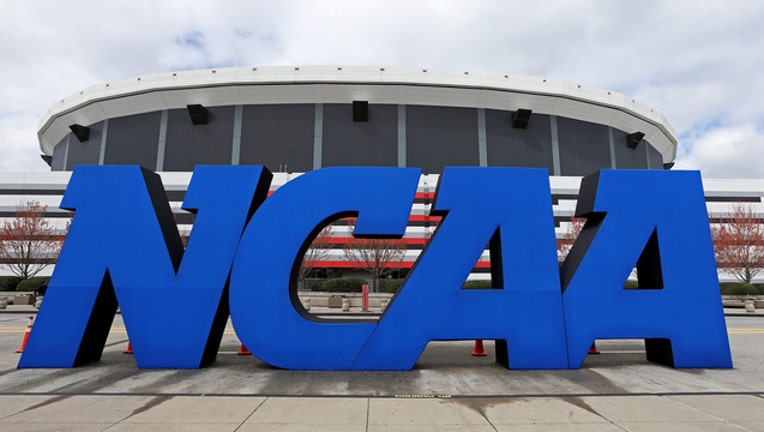 A detail of giant NCAA logo is seen outside of the stadium on the practice day prior to the NCAA Men's Final Four at the Georgia Dome on April 5, 2013 in Atlanta, Georgia. (Photo by Streeter Lecka/Getty Images)

TALLAHASSEE, Fla. - As they move forward with a proposal that would allow college athletes to receive off-field compensation, Florida senators expect the NCAA to tackle unaddressed issues such as recruitment.

The Senate Rules Committee on Wednesday backed the proposal (SB 646), sending it to the full Senate. The bill would outline how Florida college athletes could make money off their “name, image, likeness or persona,” though it would not take effect until July 1, 2021.

Bill sponsor Debbie Mayfield, R-Rockledge, pointed to an ongoing review by the National Collegiate Athletic Association when asked about the impact of her proposal on college football bowl participation in the upcoming season and student recruitment by schools.

“My understanding would be that the NCAA would be addressing that when they come back with the rules,” Mayfield said. “That’s one of the reasons we postponed the effective date … and I am certain that they will have those rules in place prior to” Florida’s law going into effect.

The proposals came after passage of a 2019 California law that will allow college athletes to hire agents and sign endorsement deals starting in 2023.

After the California law was signed and Gov. Ron DeSantis announced support for similar legislative efforts in Florida, the NCAA Board of Governors in October directed its three collegiate sports divisions to consider updates to bylaws and policies, with a January 2021 deadline to address compensation issues.

Mayfield also has been working with U.S. Sen. Marco Rubio, a Florida Republican who is among a group of U.S. senators seeking uniform athlete compensation across all 50 states.

“This is more of a pressure to put on NCAA, that says, ‘The states are moving in this direction. You need to come up with rules so we’re all playing by the same game,’” Mayfield said.

Sen. Tom Lee, R-Thonotosassa, calling the proposal “one of the most provocative bills I’ve seen in 20 years,” said the proposal needs to define when students can start monetizing their athletic popularity.

Lee said his concern is that self-marketing will become “a recruiting tool on the front end, as opposed to something that they can only begin to engage in or be talked about or discussed or be offered after they have signed and have shown up for practice.”

Also, Sen. Bill Montford, D-Tallahassee, expressed a need for the proposal to address the recruitment process.

“Even at the high school level we have, I guess the word is, recruiting. ‘You come to our school, we have a great track record of placing students on scholarships and in universities,’” said Montford, who is the CEO of the Florida Association of District School Superintendents. “And I can foresee the universities doing the same thing. ‘You come to our university. We’ve got an in-place program that will help you self-promote.’”

In allowing students to earn money from the notoriety that comes with playing college sports, the bill wouldn’t allow colleges and universities to provide athletes a share of ticket sales or any other financial incentives outside of standard grants and scholarships.

The House and Senate proposals would prohibit colleges and universities from receiving state aid from putting restrictions on athletes earning outside compensation or receiving professional representation. Schools wouldn’t be able to revoke or reduce scholarships of athletes who earn off-field pay.

Colleges and universities would have to provide financial literacy and life-skills workshops for student-athletes.

Students would be allowed to get professional representation through athletic agents licensed by the state or attorneys in good standing with The Florida Bar.

The proposal also would prohibit college athletes from making personal deals that conflict with the terms of team contracts.

The House proposal would require schools to provide athletes with health and disability insurance.