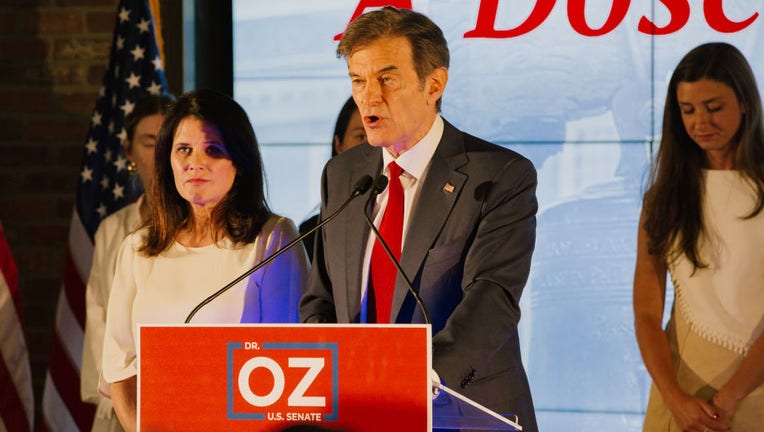 HARRISBURG, Pa. - If Dr. Mehmet Oz is elected to the U.S. Senate this fall, he'll be the first Muslim ever to serve in the chamber. It's something he hardly brings up while campaigning, his Democratic opponent isn't raising it and it's barely a topic of conversation in Pennsylvania's Muslim community.

Even if Muslims know that Oz — the celebrity heart surgeon best known as the host of daytime TV’s "The Dr. Oz Show" — is a fellow Muslim, many may not identify with him culturally or politically.

And in any case, Muslims aren't monolithic and won't necessarily vote for a candidate just because they share a religion, Muslims across the state say — he'll have to win them over on the issues just as with all voters.

Oz, whose parents emigrated from Turkey, calls himself a "secular Muslim" and has said that the spiritual side of Islam resonates with him more than the religious law side of it.

He is also part of a Republican Party that is a political minority among Muslims and is endorsed by former President Donald Trump, who earned the enmity of some Muslims for enacting a 2017 ban on travelers coming to the United States from five predominantly Muslim countries.

For a Republican Party more accustomed to electing white Christians, Oz’s religion is a strange bedfellow. Some Muslims say they have felt an animosity from the party in the past and Muslim candidates themselves have faced attacks from GOP rivals.

In a brief interview, Oz said it is good for the United States’ leadership to show that it can elect Muslims, and it is good for Muslims to see one of their own elected to the U.S. Senate.

That kind of success would reinforce the message that "if you work hard in America, no matter what your heritage we treasure you," Oz said.

Oz won the GOP's seven-way May primary in a contest so narrow it triggered a statewide recount and he now faces Democrat John Fetterman, Pennsylvania's lieutenant governor, in the Nov. 8 election. The contest in the presidential battleground state could help determine partisan control of the Senate next year.

On the campaign trail, Oz follows national GOP talking points, such as trying to pin rising inflation and gun violence on President Joe Biden and his fellow Democrats.

Oz rarely discusses his religion and Fetterman hasn't brought it up — focusing instead on trying to paint Oz as a super-wealthy, out-of-touch carpetbagger from New Jersey.

If Muslims don't know that Oz is one of them, "that is because of him, really," said Algassimu Bah, a Philadelphian and immigrant from Sierra Leone. "He hasn't been talking about his faith. We've not heard him."

Imam Abdul Aziz Suraqah, of the Muslim Community Center of Greater Pittsburgh, said most members of the mosque probably know of Oz’s faith, but seem no more passionate about Oz than any other candidate.

Imam Abdullah Pocius, who leads a mosque in Philadelphia, said he doubts that most Muslims who vote know that Oz identifies as a Muslim.

"The average American Muslim doesn’t know anything about him, except that he’s a TV doctor," Pocius said.
Oz was born in the United States to Turkish parents, married an American who is Christian and raised his children as Christians.

In a 2013 interview for the PBS series "Faces of America," Oz discussed his faith, saying that, while growing up, he became interested in Sufism, a mystical form of Islam that emphasizes someone’s direct connection to God.
Oz described it as "spiritual."

Sufism is, however, generally viewed negatively by orthodox Muslims, who emphasize strictly following a set of religious laws, said Khalid A.Y. Blankinship, a Muslim and professor of religion at Temple University in Philadelphia.

In addition, Muslims in the United States are diverse — they include converted Americans and immigrants from Asia, Africa and Europe — and many might see Oz's Turkish heritage as more meaningful to him than Islam, Blankinship said.

When it comes to voting, party loyalty will override religion for the vast majority of Muslims, Blankinship said.

"Most people would not think of supporting him just because he’s a Muslim," Blankinship said. "And they would look at what is he saying, what are his politics, what is his position going to be."

Suraqah said he tries to teach Muslims to be principled in their voting choices and to avoid supporting candidates "just because they speak nicely to the Muslim community" or appeal to them as fellow Muslims.

Still, it is important — and remarkable — that a major political party has nominated a Muslim for a Senate seat, Muslims say.
But galvanizing Pennsylvania's Muslim community might have only a slight effect on the election.

Estimates suggest that Muslims are 1% to 2% of the state's voters and Pew Research Center estimated in 2017 that two-thirds of American Muslims identified as Democrats, or leaned that way.

That could further isolate Oz from many Muslim voters.

"It is complicated because most Muslims are registered Democrats," said Wa’el Alzayat, CEO of Emgage, a national Muslim political advocacy organization. "While being a Muslim is nice and it’s good, it is not sufficient and in some cases it doesn’t matter what your faith is if you are not on the right side of the issues."

Salima Suswell, Emgage's executive director in Pennsylvania, said she became aware that Oz is a Muslim soon after he launched his campaign.

But, Suswell said his religious beliefs don’t factor into her decision at the polls and that the issues Muslims care about are not limited to "stereotypical ‘Muslim issues.'"

"We know that just because somebody proclaims to be a part of our religious community, it does not mean that they represent our values," she said.

Issues aside, it's a problem that Oz doesn't speak out against Trump as a source of Islamophobia and hate, Alzayat said.
Dr. Nadeem Iqbal, a Pittsburgh-area radiologist who was originally born in Pakistan, said he might be tempted to vote for a Muslim candidate.

But Iqbal wondered if or how Oz practices the religion and he can't accept Oz's ties to Trump, who he views as racist, anti-Muslim and empowering America's extremist and racist fringes.

"And personally," Iqbal said, "I will not vote for anyone endorsed by Donald Trump."