In the encircled city of Mariupol, a Russian airstrike destroyed a theater where hundreds of people were sheltering. Many people were buried in the rubble, Ukraine’s foreign ministry said in a statement, though the number of casualties wasn't clear.

Missiles and artillery slammed into high-rise apartment towers in Kyiv, setting buildings ablaze and sending smoke over the capital and its suburbs.

What is happening on the ground?

Ten people were killed while standing in line for bread in the northern city of Chernihiv, the Ukrainian General Prosecutor’s Office said.

Satellite images from the Maxar space technology company showed Russian self-propelled artillery and multiple-rocket launchers deployed on the outskirts of Chernihiv, their barrels and tubes aimed at the city.

Ukrainian Foreign Minister Dmytro Kuleba said on Twitter that the attack on the theater in Mariupol is a "horrendous war crime." Maxar's satellite imagery from Monday showed the word "children" written in large white letters in Russian in front of and behind the building.

The Russian defense ministry denied bombing the theater or anywhere else in Mariupol on Wednesday.

In central Kyiv, shrapnel from an artillery shell smashed into a 12-story apartment building early Wednesday, wiping out the building's top floor and starting a fire. Emergency services reported two victims from the blaze, without specifying if they were killed or injured. 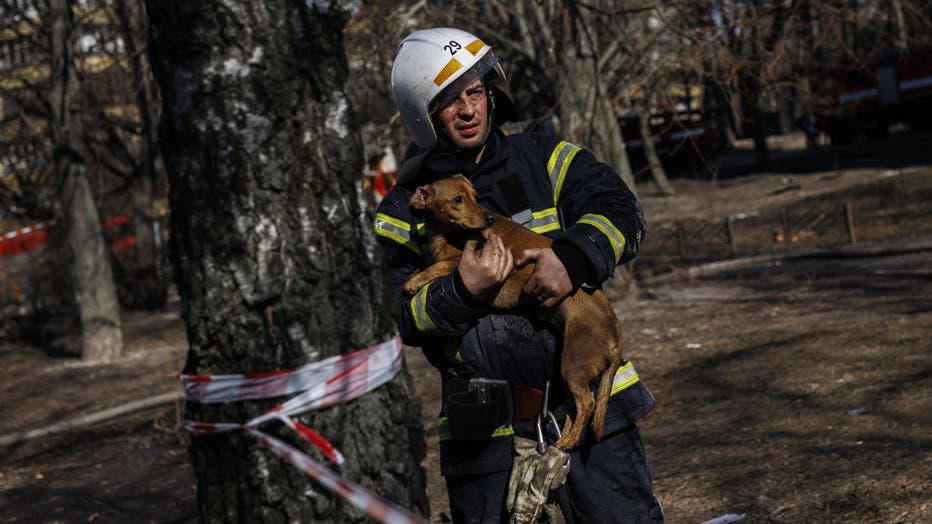 A Russian airstrike destroyed multiple residential apartments in the town of Markhalivka southwest of the capital, authorities said.

Russia now occupies the city of Ivankiv, 80 kilometers (50 miles) north of Kyiv, and controls the surrounding region on the border with Belarus, local officials said.

Relentless strikes pounded the northeastern city of Kharkiv close to the Russian border, but Ukrainian forces continued to thwart Russia's incursion into the heart of the city, city officials said.

Powerful explosions also thundered in the region around Kherson, a strategic port near the Black Sea. Ukrainian military forces have dealt a punishing blow to Russian air assets stationed at the airport in Kherson, which Russian troops seized early in the war, the Ukraine military's General Staff said late Wednesday.

Satellite photos by Planet Labs PBC analyzed by The Associated Press show helicopters and vehicles on fire at the air base after what Ukraine said was its strike on Tuesday.

There were also explosions near a train station in the southeastern city of Zaporizhzhia, home to several power stations.

The region "is on the verge of a humanitarian catastrophe," Zelenskyy’s office warned. 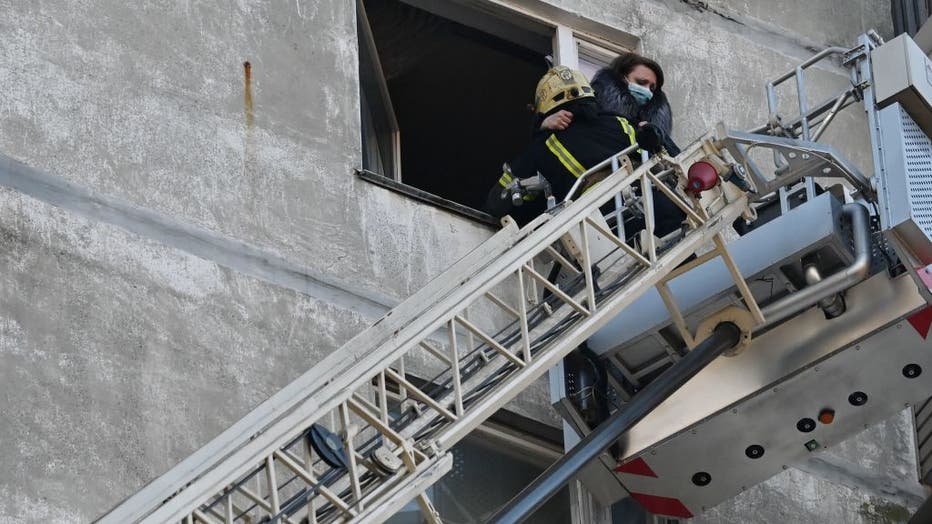 Residents are evacuated by firefighters from a burning 16-story residential building in Kyiv on March 15, 2022, after strikes on residential areas killed at least two people, Ukraine emergency services said as Russian troops intensified their attacks

In Mariupol, workers afraid for their own lives brave relentless shelling to dump the bodies of children in a mass grave. Local officials struggle to account for the dead. Although they've tallied 2,500 deaths in the siege, many bodies crushed in the rubble can't be counted because of the assault.

Bodies lie out in the street. Workers tell families to leave their dead outside because it’s too dangerous to hold funerals.

In Kharkiv, doctors are struggling to treat COVID-19 patients as the bombs fall outside. Several times a day, air raid sirens wail at the Kharkiv Regional Clinical Infectious Diseases Hospital, sending feeble virus patients — some connected to ventilators and struggling to breathe — running for bomb shelters.

"Bombing takes place from morning into night," hospital director Dr. Pavel Nartov said. "It could hit at any time."

How is the world responding to the war?

Six Western nations have called for a U.N. Security Council meeting on Ukraine on Thursday. The United Kingdom’s U.N. Mission tweeted Wednesday that the six countries asked for the meeting, saying: "Russia is committing war crimes and targeting civilians. Russia’s illegal war on Ukraine is a threat to us all."

The mission said the meeting was requested by six Security Council members and posted their flags -- the U.K., United States, France, Ireland, Norway and Albania. It has not yet been officially scheduled.

Zelenskyy acknowledged in his speech to the U.S. Congress that the no-fly zone he has sought to "close the sky" over his country may not happen. Still, he said the U.S. must sanction Russian lawmakers and block imports, in addition to providing military assistance.

"We need you right now," Zelenskyy said in remarks livestreamed to the U.S. Capitol, which were punctuated with a graphic video contrasting Ukraine before the invasion with the grisly aftermath.

In an unprecedented move, the Council of Europe expelled Russia from the continent’s foremost human rights body. Staff even went outside its headquarters in Strasbourg, France, and took down the Russian flag.

Tiny Kox, the president of the Parliamentary Assembly of the Council of Europe, said the expulsion "was necessary, and I am glad we dared to do so."

Putin said Wednesday that the operation in Ukraine is unfolding "successfully, in strict accordance with pre-approved plans."

But with the Ukrainian resistance frustrating Kremlin hopes for a lightning victory, Russian Foreign Minister Sergey Lavrov said that a "business-like spirit" has emerged in talks with Ukrainian officials, which he described as focused on a "neutral status" for Ukraine’s military.

The leaders of three European countries, Poland, the Czech Republic and Slovenia, returned on Wednesday from a risky trip to the besieged Ukrainian capital to show their support and meet with Zelenskyy.

Biden announced that the U.S. is sending an additional $800 million in military assistance — including anti-aircraft and anti-armor weapons and drones — to Ukraine, making a total of $2 billion in such aid sent to Kyiv since Biden took office more than a year ago.

Biden also plans to travel to Europe next week for talks with European leaders about the Russian invasion, and will attend an extraordinary NATO summit in Brussels. NATO has been bolstering its eastern flank with troops and equipment to deter Russia from invading any of its members.

Japan announced it will revoke its "most favored nation" trade status for Russia over its invasion of Ukraine.