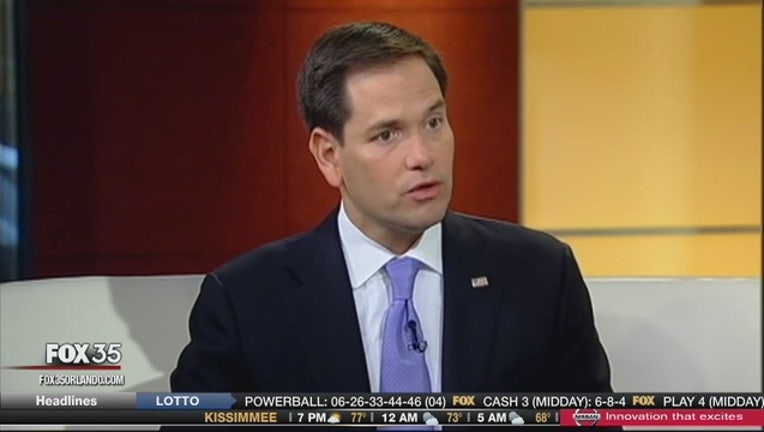 MIAMI (AP) — Republican presidential candidate Marco Rubio refused to criticize his rival Jeb Bush during a flurry of television interviews Thursday following a strong performance in the third GOP debate. Rubio instead tried to focus attention on his criticisms of Hillary Rodham Clinton.

In a testy exchange that was a debate highlight, Rubio seemed to neutralize Bush's call for him to resign his Senate seat because he is missing votes to campaign. "What is it, like a French work week?" Bush volleyed.

He said the same Thursday: "My campaign is not going to be about attacking someone else. I'm not running against them. I'm running for president." Rubio told ABC'S "Good Morning America" he has admiration for Bush and wants only to discuss policy differences.

Instead, Rubio focused on Clinton in appearances on six television networks. On CBS's "This Morning," Rubio stuck to his claim in the debate that Clinton and other Obama administration officials lied about the 2012 attack on the U.S. mission in Benghazi, Libya, when she was secretary of state. The attack killed U.S. ambassador Chris Stevens and three others.

"It was clear from the very early moments of that attack that it was not a spontaneous uprising," he said. "It was a planned attack."

"She knew that it was a terrorist attack as she shared (it) by email with various people," said Rubio. "Yet she continued to perpetuate the lie that this was something different."

In fact, the day after the attack, President Barack Obama called it an "act of terror." Clinton, in her testimony last week before a House panel, said the intelligence community was receiving conflicting information in the hours after the attack and she was concerned about demonstrations in capital cities in other countries over an inflammatory video. Clinton also said the suspected Libyan militant accused in the attacks, Ahmed Abu Khattala, has cited the video as a factor.

Rubio chided the news media for "going around saying it was the greatest week in Hillary Clinton's campaign" after her testimony last week. "It was the week she got exposed as a liar," he said.