The ballot counting was completed following a pause on Wednesday evening when a lawsuit was filed by the Harris County Republican Party, according to Beth Stevens with the Harris County Election Administrators Office.

Stevens says the vote counts were done around 1 a.m. Thursday.

At 9:30 a.m. Thursday, another hearing was held. Stevens says an update was provided on the completion of the election day ballot count, and the parties "have agreed to file a motion to dismiss the lawsuit."

In the lawsuit, Cindy Siegel, a member of the Harris County Republican Party Executive Committee claimed, "The Republican Party experienced irregularities that affected votes legitimately cast by its voters. For example, some voters were able to successfully submit their votes for the first page of the ballot but were unable to submit their votes for the second page of their ballot." 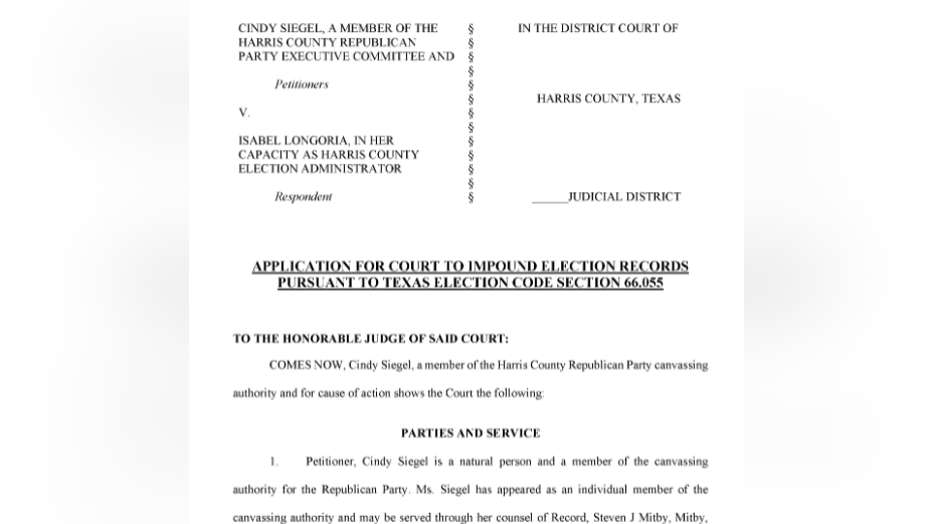 As Texas Election Code states precinct returns must be completed and provided to the canvassing authority within 24 hours of the polls closing on election day. As FOX 26 reported on election day, Longoria filed a notice with the Texas Secretary of State saying they might not make the deadline.

It's unclear if the deadline would've been met as the lawsuit, which Stevens said was filed around 6 p.m. Wednesday, caused the counting personnel to stop counting and wait until a judge rules on the lawsuit.

Stevens said that the county was sitting at 99.9% of votes that had been tabulated. Stevens guesstimated that between 1,000 to 1,500 votes were left to be counted.