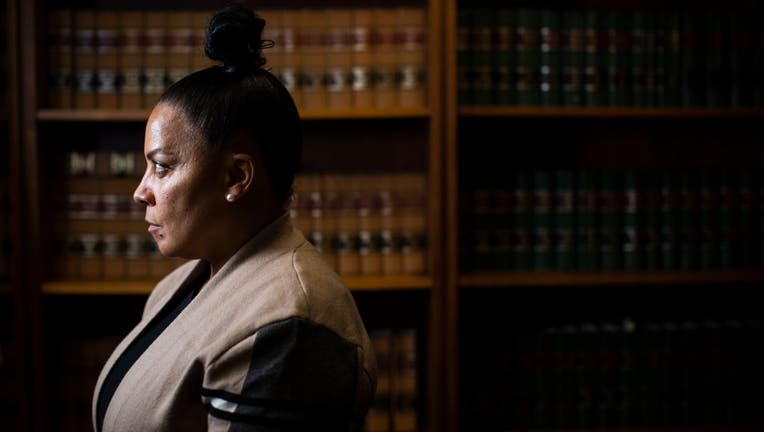 Rachael Rollins, District Attorney of Suffolk County in Massachusetts poses for a portrait in her office in Boston, MA on Oct. 14, 2021. (Photo by Adam Glanzman/For The Washington Post via Getty Images)

BOSTON - Boston’s former top prosecutor was sworn in Monday as the U.S. Attorney for Massachusetts, becoming the first Black woman to serve as the top federal prosecutor in the state.

Rollins took the oath of office in a private ceremony in the Boston federal courthouse after officially stepping down as district attorney for Suffolk County, which covers Boston and three suburbs.

Rollins was narrowly confirmed by the U.S. Senate last month, with Vice President Kamala Harris casting the deciding vote. She has said she’s received violent and racist threats as a result of her nomination, in which Republicans in Congress accused her of being soft on crime.

Rollins said the U.S. Marshals Service denied her request for a security detail, deeming she was at low risk.

She was elected district attorney in 2018 pushing for progressive criminal justice reforms, including pledging not to prosecute certain low-level crimes to better focus on more serious crimes like homicide. Rollins argued people shouldn’t be jailed for crimes that result from mental health or addiction problems.

Gov. Charlie Baker has appointed Kevin Hayden, chair of the state’s sex offender registry board, to serve out the remainder of Rollins’ district attorney term, which ends later this year.