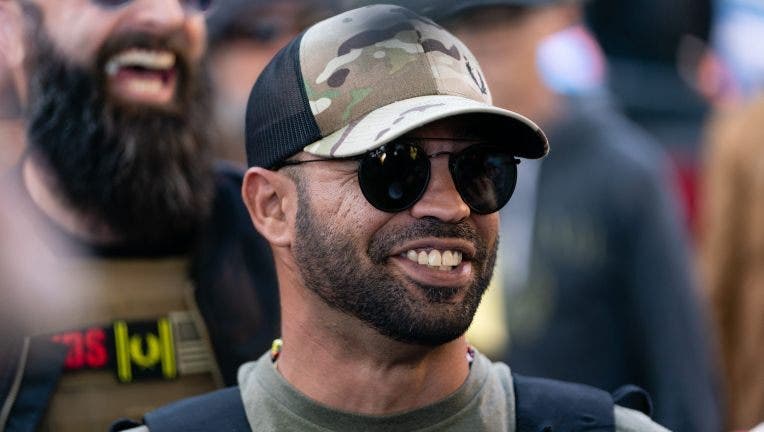 ATLANTA, GA - NOVEMBER 18: Enrique Tarrio, leader of the Proud Boys, a far-right group, is seen at a "Stop the Steal" rally against the results of the U.S. Presidential election outside the Georgia State Capitol on November 18, 2020 in Atlanta, Georg

WASHINGTON - The U.S. Department of Justice has indicted Proud Boys leader Henry "Enrique" Tarrio for his involvement in the riot at the U.S. Capitol, officials say.

Tarrio was arrested Tuesday in Miami and will have his initial court appearance later today in Florida.

Tarrio faces conspiracy and other charges related to the breach of the U.S. Capitol. The charges against Tarrio are among some of the most serious filed so far.

CAPITOL RIOT: A LOOK BACK ON YEAR SINCE JANUARY 6 INSURRECTION

According to court documents, Tarrio was the national chairman of the Proud Boys organization through at least January 6, 2021.

Looking back on Jan. 6 Capitol Riot

Court documents say Tarrio organized a special chapter of the Proud Boys known as the Ministry of Self Defense that, "conspired to corruptly obstruct, influence and impede an official proceeding, the certification of the Electoral College vote."

Officials say Tarrio has not been accused of physically taking part in the breach of the Capitol – but is said to have instead remained in contact with other members of the Proud Boys during the attack.

Authorities say a group of Proud Boys members met at the Washington Monument and marched to the Capitol as then-President Donald Trump finished speaking to supporters near the White House.

The group then followed a crowd of people who breached barriers to the Capitol grounds, the indictment says. Several Proud Boys members entered the Capitol building itself after the mob smashed windows and forced open doors.

Tarrio was not present during the riot because police arrested him in the District two days before – charging him with vandalizing a Black Lives Matter banner from the Asbury United Methodist Church in D.C. during a protest in December 2020.

The day after his arrest, Tarrio was ordered to "stay away from D.C." But he did not leave the District as ordered.

One year ago, pro-Trump rioters stormed the U.S. Capitol, disrupting Congress' duty to certify the 2020 presidential election results. Many laws were broken that day, setting off the largest criminal investigation in the history of the United States.

According to the Associated Press, Tarrio met with Oath Keepers founder and leader Elmer "Stewart" Rhodes and others during which they referenced the Capitol. The indictment says Tarrio then directed Proud Boys members – prior to and during – the riot.

The indictment against Tarrio demonstrates how far the Department of Justice is going to prosecute the leaders of extremist groups whose members were alleged to have participated in the attack at the Capitol.

Rhodes and 10 other members of the Oath Keepers were charged earlier this year with seditious conspiracy in the Capitol attack.

The first Capitol riot trial is now underway in D.C. and legal experts say it could set the stage for hundreds of cases to come.

In the 14 months since the U.S. Capitol riot, more than 775 have been arrested in nearly all 50 states for crimes related to the breach.

Over 245 people have been charged with assaulting or impeding law enforcement.