Looting and destruction despite curfew in NYC

The curfew did nothing to prevent the destruction of businesses throughout the city. Robert Moses and Raegen Medgie report.

NEW YORK - More looting and protests unfolded across New York City in the hours before and after a curfew went into effect from 11 p.m. Monday until 5 a.m. after nights of destruction followed three days of largely peaceful protests over George Floyd's death.

More than 200 people were arrested and several NYPD officers injured during the chaos across the streets.  Looters targeted several shops in Manhattan's Herald Square, including the Macy's flagship department store, on Monday night. Images posted on social media showed dozens of police officers entering Macy's to go after the people who broke in. The store's windows were covered in plywood.

Authorities said that the number of police officers on the street overnight were doubled in an effort to hinder looting. Gov. Andrew Cuomo and Mayor Bill de Blasio hoped the curfew would minimize violence and looting

Big crowds rallied in Times Square and Brooklyn in the afternoon and then problems started in the evening. People looted a Nike store in Lower Manhattan. Later in the evening, reports surfaced that people had broken into the flagship Macy's store on 34th Street.

Video posted on social media showed police pouring into a door of the boarded-up store.

"Unfortunately, there are people who are looking to distract and discredit this moment," Cuomo, a Democrat, said. "The violence and the looting has been bad for the city, the state and this entire national movement."

De Blasio, a Democrat, had previously rejected imposing a curfew, as many other cities across the U.S. have done to try to curb violence that erupted amid demonstrations over Floyd's May 25 death, police brutality and racial injustice. 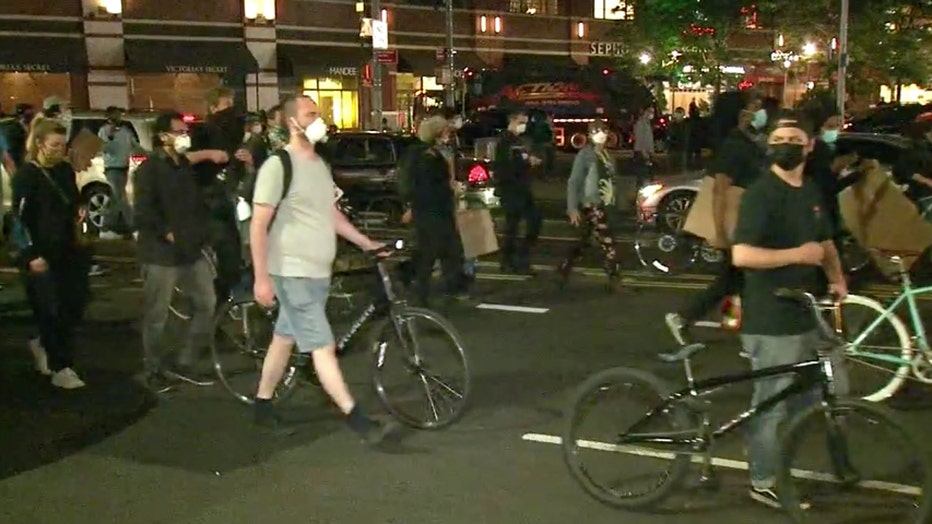 But de Blasio said Monday he was talking with NYPD Commissioner Dermot Shea and Cuomo about the idea.

"Tonight, to protect against violence and property damage, the governor and I have decided to implement a citywide curfew," de Blasio said in a statement.

Looting in the Bronx

Looting was reported Monday night in the Fordham section of the Bronx.

A 21-year-old man was shot in the neighborhood around 12:30 a.m. and was taken to a hospital, police said. They said his injuries were not life-threatening.

Groups of people rampaged down the sidewalks in Soho and other neighborhoods including Union Square, breaking into Rolex, Kate Spade and Prada boutiques and electronics stores that have been shuttered for over two months because of the coronavirus.

Officials in New York City are considering a curfew after Sunday night looting.

Big crowds rallied in Times Square and Brooklyn in the afternoon and then problems started in the evening. Reports surfaced that people had broken into the flagship Macy's store on 34th Street.

“This is like a dream. Like a movie,” said New York City resident Sean Jones as he watched the destruction. “People are doing this so next time, before they think about trying to kill another black person, they’re going to be like, ’Damn, we don’t want them out here doing this ... again.'"

For the third day in a row, protests across New York City were largely peaceful during the daylight hours Sunday but turned violent at night.

Earlier Sunday, officers had made some gestures of solidarity with marchers. Some officers knelt with protesters in an intersection as an organizer called out the names of people killed by police. 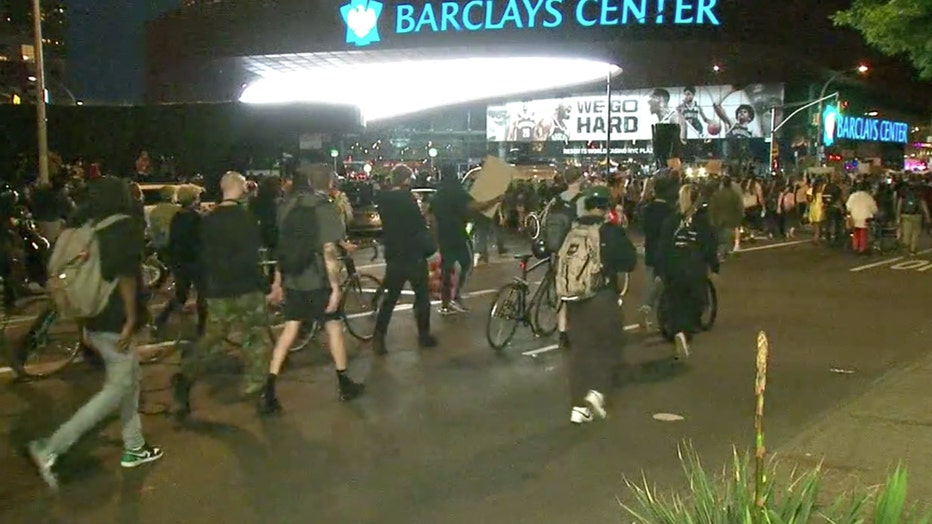 But the police department has come under criticism for confrontations with demonstrators over the weekend, including an instance when two police vehicles plowed through a group of protesters Saturday in Brooklyn.

Shea said the confrontation is one of “about six" that the department’s internal affairs bureau is investigating.

Similar protests have flared up around the nation in response to Floyd's death and other killings of black people, particularly by police.

The mayor and governor also reminded New Yorkers participating in protests to take proper health precautions and wear face coverings due to the COVID-19 virus.