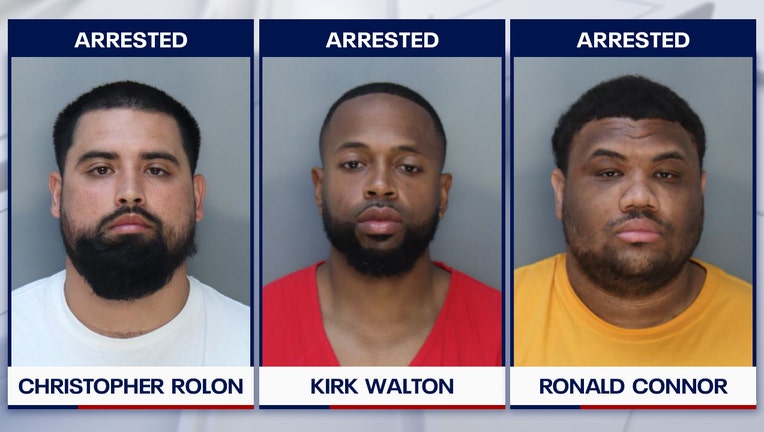 TALLAHASSEE, Fla. - Three Florida correctional officers have been arrested and charged with murder in the fatal beating of a handcuffed prisoner in the mental health unit who had thrown urine at them, the Florida Department of Law Enforcement announced.

The incident happened on Feb. 14, 2022, when the guards were removing the inmate from his cell at the Dade Correctional Institution, located south of Miami, in order to transfer him to a north Florida prison. After the inmate, who was being housed in the mental health unit of the prison, threw urine on one of the officers, investigators said the officers retaliated by putting him in handcuffs and began beating him.

"After the inmate was removed, even though he was in handcuffs and compliant with officer commands, agents say the officers began to beat him. The inmate was beaten so badly he had to be carried to the transport van," the department said in a news release.

The inmate was not identified in the statement, but the Miami Herald identified him as 60-year-old Ronald Ingram.

Authorities said the inmate was placed alone in what was described as a secure compartment inside the van.

The van made a stop along the way in Ocala and that was when the inmate was found dead, laying on a bench inside the vehicle, the statement added. A medical examiner said the death was caused by a punctured lung that led to internal bleeding. The inmate also had bruises on his face and torso.

"Staff misconduct, abuse or criminal behavior have no place in Florida’s correctional system. Individuals who are sentenced to incarceration by our criminal courts have lost their freedom but not their basic rights," Miami-Dade State Attorney Katherine Fernandez Rundle said in a statement. "Inmates should not be subject to forms of ‘back alley’ justice which are actions in violation of Florida law."

All were being held without bail, and online jail records didn't list attorneys for the men.

Authorities said they are searching for a fourth officer involved in the case. They didn't disclose his identity.

WSVN reports that it's not the first time that Dade Correctional Institution, which has a large psych ward and is one of a handful of institutions that cater to inmates with psychological issues, has been under investigation for the death of a prisoner.

Back in 2012, inmate Darren Rainey died after guards at the same prison placed him in a scalding hot shower and locked him inside for several hours as punishment, with no way to control the water temperature himself. The 50-year-old inmate, who reportedly suffered from severe schizophrenia, died after suffering from severe burns that stripped the skin from his body. One inmate witness said Rainey was taunted by staff as he begged for mercy, although the state attorney’s office declined to file charges.