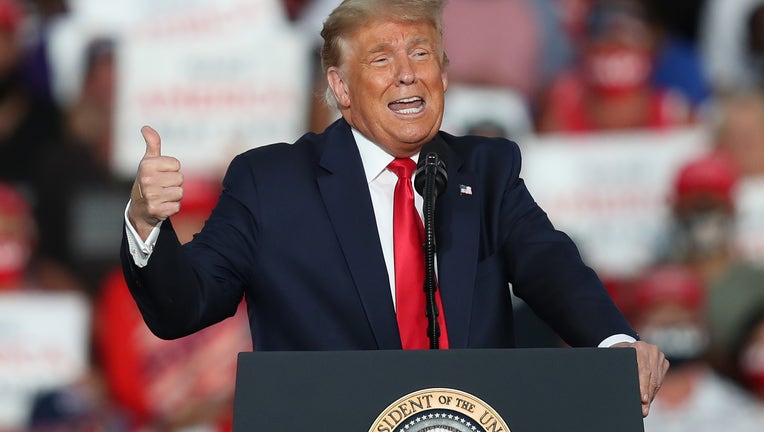 SANFORD, FLORIDA - OCTOBER 12: President Donald Trump speaks during his campaign event at the Orlando Sanford International Airport on October 12, 2020 in Sanford, Florida. Trump was holding his first campaign rally since his coronavirus diagnosis as

LAKE MARY, Fla. - President Donald Trump will return to Florida on Friday, October 16, for a Make America Great Again rally in Ocala, the campaign announced on its website.

The event will be held at Ocala International Airport, 1770 SW 60th Ave., a 4 p..m. with doors opening at 1 p.m.  Guests may only register up to two (2) tickets per mobile number per event. All tickets are subject to a first come first serve basis.  Visit the campaign website to request tickets.

Trump chose Sanford, Florida as the location for his first road rally since contracting COVID-19.  Shortly before the event started on Monday evening, the White House posted a memo by Trump's doctor declaring he was no longer contagious.

President Donald Trump campaigned in Central Florida after testing negative for the coronavirus.

Polling in battleground states, including Florida, show Trump and Democratic challenger Joe Biden in tight races. Trump is expected to hold campaign events in Pennsylvania, Iowa, North Carolina, Georgia, and Wisconsin over the course of the week, before returning to the Sunshine State.

In response to the announcement that President Trump will be hosting another rally in Ocala, Florida Democratic Party Chair Terrie Rizzo released the following statement:

“Donald Trump can hold a campaign rally in Florida every day until November 3rd and it isn’t going to change the fact that he failed in his number one job to protect the American people and owns the worst jobs record of any president in modern American history. He can keep shouting his lies to Floridians, but we’ve already heard his excuses and we’re not buying more of his empty promises. Florida Democrats are already voting and we’re voting for Joe, a leader we can trust to tell us the truth and keep his word.”