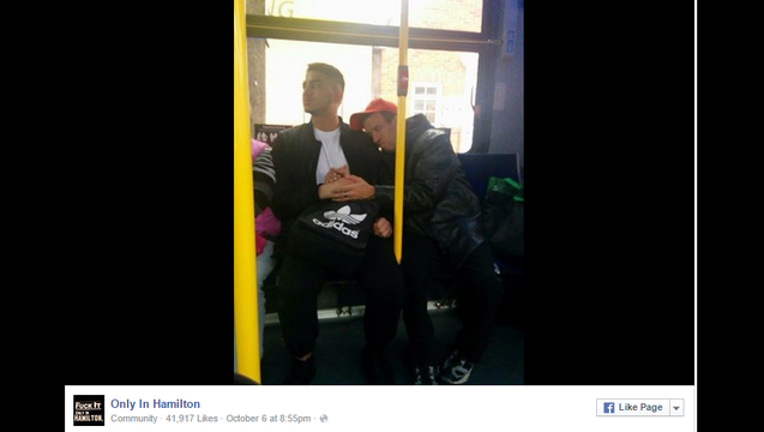 21-year-old Godfrey Cuotto, a 21-year-old student in Hamilton, Ontario, was photographed on a bus with a special needs man named Robert earlier this week.

The photo was posted to the Facebook page “Only in Hamilton on Tuesday and has now spread across social media.

According to Cuotto, he was coming home from a burrito restaurant downtown when he got on a crowded bus and a man sitting near the front reached out to shake his hand.

The Huffington Post reports that Cuotto was taken aback initially, but then he shook Robert’s hand.

"He kept holding my hand," Cutto told the Huffington Post Canada. "I thought I was getting pranked at first, but he just needed comfort."

The bus ride lasted for 30 minutes, and Cuotto says that Robert held his hand, leaned on him, hugged him, and also kissed his hands throughout the ride.

"I just allowed it, like what am I going to do?" Cuotto said. "Sometimes you just have to be selfless and put someone else's needs above yours."

One of Robert’s family members contacted Cuotto on Facebook later, thanking him for comforting their uncle. They also informed him that Robert suffers from cerebral palsy and is deaf.

Cuotto was interviewed by Toronto radio station Kiss 92.5 saying that he stayed with Robert until the final stop and attributed his kind nature to his mom. He said, “I was raised by a queen.”