PHOENIX - Police say a suspect is dead and a K-9 was injured in a shooting at an apartment complex near 19th Avenue and Dunlap in Phoenix.

According to the Phoenix Police Department, officers responded to an apartment complex at around 4:40 a.m. for reports of shots fired. When they arrived at the scene, police found a man dead and as they searched for a suspect, they were directed to an apartment.

The victim in the initial homicide was identified as 30-year-old Demeatris Roberson.

The suspect was identified as 42-year-old Maurice Jackson. Investigators say Roberson and Jackson had an ongoing dispute. 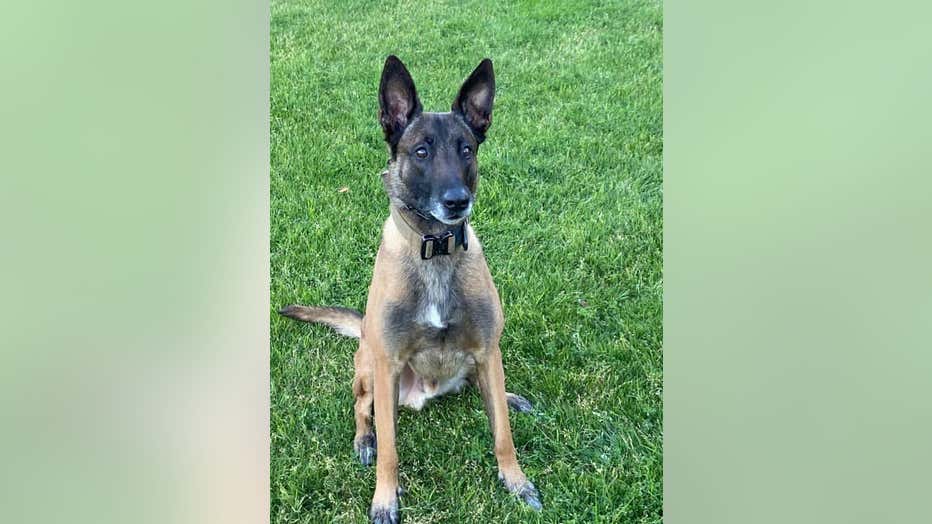 K-9 "Dennis" was injured in an officer-involved shooting in Phoenix on Dec. 3. He is expected to make a full recovery. (Phoenix Police Department)

Police say "Dennis," a six-year-old Belgian Malinois which has been with the department for four years, suffered serious injuries. The K9 was rushed to a veterinary clinic and is expected to make a full recovery.

Bodycam footage of the incident was released by the police department on Dec. 16.

No officers were injured in the shooting.

One handler says the dogs dedicate their lives to help fight crime, and make a police officer's job just a bit safer.

K-9s have played an important role in law enforcement, and they have saved many lives in dangerous situations. On Dec. 3 FOX 10's Stephanie Olmo spoke with a K-9 handler and trainer on the K-9's roles.

"How they enhance our safety is the unknown that is really dangerous: is there someone in there? where is this person? If we don't use that dog, we have four, five, six guys going through a small structure, lifting up cushions, going through dark closets, that dog would go in there and smell where that odor is coming from and get there first," said Daniel Bill.

Bill says before police dogs go out to work, they are put through extensive training.

"When the handlers train with me, probably three to four months of consistent training, 40 hours a week, four months until he's able to hit the street," said Bill.

Even when the dogs are ready to go, it still has to be determined whether or not the K-9 should be used in a certain situation.

"I'll ask the officers OK, what do we have? What type of crime do we have, and if it's a severe enough crime, then I'll see the environment. Is it a house? Is it a large building? Is it an outdoor environment, because we have to have a victim in this crime we are willing to prosecute. and the crime threshold has to be relatively high to use these patrol dogs," said Bill.

Bill says although these dogs are work dogs, they are family at the end of the day. If one gets injured on the job, it’s not news people would want to hear.

"Your heart sinks, so it's tough, but it's almost as bad as when you hear an officer get shot," said Bill.

"The 6-year-old Belgian Malinois is being credited with saving the lives of officers in this case."

SkyFOX was over the scene of an officer-involved shooting near 19th Avenue and Dunlap.