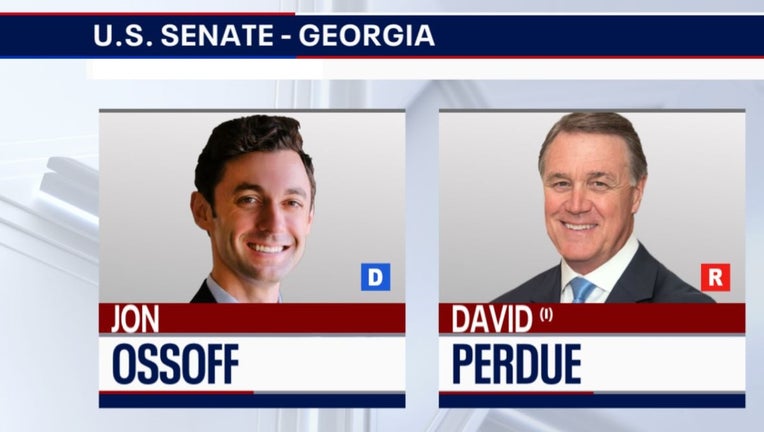 U.S. Sen David Perdue was sitting under the 50% threshold required to win the November contest against Democratic challenger Jon Ossoff outright. However, votes continued to be counted in the Peach State as of Friday.

Georgia Secretary of State Brad Raffensperger indicated during a Friday morning press conference that a recount in the presidential race between President Donald Trump and former Vice President Joe Biden would likely happen.

With two Senate seats up for grabs in Georgia, there is a lot at stake for both parties. Results will likely determine which political party controls the Senate.

Georgia’s Senate race between Sen. Kelly Loeffler and Democratic opponent Raphael Warnock is already set for a runoff, which will take place on Jan. 5.

The Georgia Secretary of State's Office answers voters questions about provisional ballots and how to cure a ballot.

RELATED: Recount laws in Georgia: What are the rules

"The stakes in this election could not be higher: a vote for Jon Ossoff is a vote to hand power to Chuck Schumer and the radical Democrats in Washington. Georgians won't let that happen. Senators David Perdue and Kelly Loeffler are going to win these two U.S. Senate races, and we will defend the Republican majority," the Perdue campaign said in a statement. "As votes continue to be counted, Senator David Perdue remains in first place with a commanding lead – that won't change. We are excited for overtime – it gives us even more time to continue exposing Jon Ossoff and his radical socialist agenda. Jon Ossoff does two things well: burn through out-of-state liberal money and lose elections. Georgians will now get to watch him do both again."

Perdue, 70, is a former business executive who was seeking his second term in the Senate. Ossoff, 33, heads a media company that investigates crime and corruption for news organizations who entered politics with a failed attempt to beat Karen Handel for Georgia Congressional District 6 during a highly publicized special election in 2017.

Ossoff hammered Perdue on his response to the coronavirus pandemic saying, while the Georgia Republican accused Ossoff of backing a “radical socialist agenda,” a phrase that nearly became synonymous with the race, and that he would be a “rubber stamp” for liberals. Perdue called Ossoff “desperate” while Ossoff said Perdue was entrenched in the “swamp” of Washington and lacked empathy for voters.

“The votes are still being counted, but we are confident that Jon Ossoff’s historic performance in Georgia has forced Senator David Perdue to continue defending his indefensible record of unemployment, disease, and corruption," Ossoff's campaign released in a statement. "When a runoff is called and held in January, Georgians are going to send Jon to the Senate to defend their health care and put the interests of working families and small businesses ahead of corporate lobbyists. Georgians are sick and tired of the endless failure, incompetence, and corruption of Senator Perdue and Donald Trump.”

Perdue ran on being President Trump’s choice for Senate and a defender of the Democrat’s “sham impeachment” of him. These were points Ossoff tried to use to his advantage courting those who oppose the current administration and, in particular, the way is has handled the coronavirus pandemic.

RELATED: Joe Biden takes the lead in Georgia as votes continue to be counted

Ossoff harped on the senator’s downplaying of the risk of COVID-19, using sound of Perdue comparing it to the common flu in ads and said the senator was complicate “in a pandemic response that everybody from all parties knows has been a disaster.” He also called into question Perdue’s morality over it saying during a debate “listen to you — not a shred of empathy — not a shred of personal responsibility (about) a virus that you told us posed low risk to our health.”

Ossoff also accused Perdue of hypocrisy for backing Amy Coney Barrett’s nomination to the Supreme Court when he was against former President Barack Obama’s 2016 nomination of Merrick Garland. Perdue, in his defense, said the situation in 2016 was “totally different” because the White House was controlled by one party and the Senate by the other, when today both branches are controlled by Republicans. Perdue said if Ossoff is elected and the Democrats take the White House and Senate, they would pack the Supreme Court, a move Ossoff said he opposed.