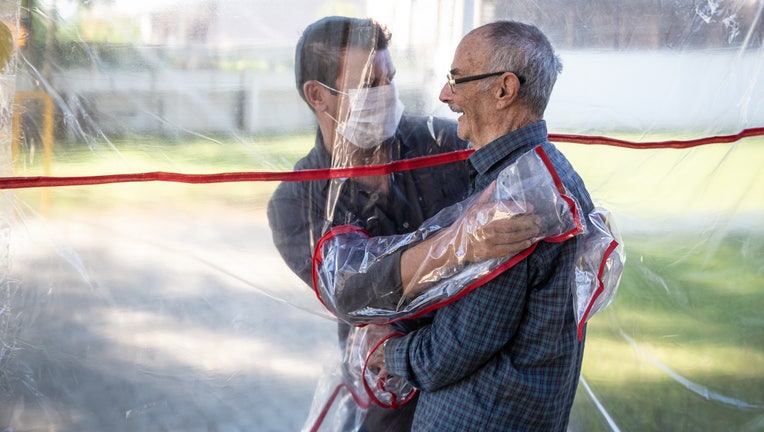 GRAVATAI, BRAZIL - JUNE 16: A son hugs his father at the Geriatric Clinic Três Figueiras on June 16, 2020 in Gravatai, Brazil. The clinic created the Tunel do Abraco (hug tunnel) for elderly residents to be able to hug relatives after more than 70 da

FOX NEWS - You don’t know what you got till it’s gone.

Those who call themselves “huggers” have potentially been without for months now — and there’s good reason why that might be impacting their mental health during the coronavirus lockdown, according to a new study. Social scientists have discovered that, for some, the craving for human touch is influenced by a variety of factors, including our genes.

University of Arizona professor Kory Floyd, whose research was published this week in Communication Monographs, discussed the inherited interplay between skin-on-skin touch and the psyche.

“There’s something special about touch that I think relates back to the fact that we, as human beings, are born in such a state of immaturity that we have no ability to take care of our own needs,” says Floyd in an article on the university’s website. “Touch equals survival as infants. If we don’t have someone touching us and helping to meet our needs, then we don’t survive.”

Those who live alone or who are limiting their in-person interactions during the pandemic might be suffering from hereditary “skin hunger,” he explains.

His new study investigating affectionate behavior found, in particular, that genetics play a strong role in women, but not at all for men.

For women, affection is driven 45% by hereditary factors and 55% from their environment, such as personal experience and the media. However, men seem to rely solely on their environment — a surprising finding, researchers say.

“The question that drove the study was: Recognizing that some people are more affectionate than others, what accounts for that variation, and is any part of that variation genetic?” writes Floyd, who studies how affection impacts stress and physiological functioning.

“A study like this makes room for us to talk about the possibility that a number of social and behavioral traits that we automatically assume are learned may also have a genetic component,” he adds.

His team used twin relationships as the basis for their study, which asked people to measure their personal levels of affectionate needs and behaviors. Because the 464 pairs of participating twins were raised in the same household, researchers can count on their environment having been the same — thus revealing their genetic differences.

Identical twin pairs of women were found to score more similarly compared to fraternal twin women. This indicates that their shared DNA was a contributing factor in how they express affection.

The researchers could not conclude the reason why men do not show the same variability between genetics and environment as women. However, they note that previous studies have found that men express their affections less overall.

“When we measure people’s tendency to be affectionate and to receive affection from other people, almost without exception we find that women score higher than men,” Floyd writes. “The trait of being affectionate may be more adaptive for women in an evolutionary sense. There is some speculation that affectionate behavior is more health supportive for women than it is for men, and that it helps women to manage the effects of stress more than it does for men. That may be partly why women are more likely than men to inherit the tendency to behave that way rather than that tendency simply being a product of their environment.”

Study percentages are not a direct reflection of every individual, but rather provide a framework for talking the role of genetics.

“Our genes simply predispose us to certain kinds of behaviors; that doesn’t automatically mean we’re going to engage in those behaviors,” Floyd says. “And it certainly doesn’t mean that we have no control over them.”