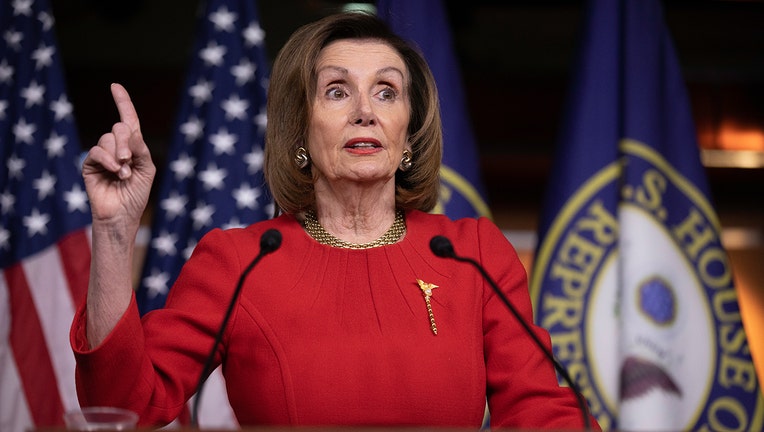 Pelosi and other Democrats have been critical of Trump’s decision to conduct an airstrike in Iraq that killed Iranian Gen. Qassem Soleimani, head of the Islamic Revolutionary Guard Corps' elite Quds Force, claiming he did not properly notify Congress in advance and warning about the risk of escalation in the region. Trump has also threatened additional action if Iran retaliates for Soleimani’s death.

“This week, the House will introduce and vote on a War Powers Resolution to limit the President’s military actions regarding Iran,” Pelosi wrote in a letter to fellow Democrats, referring to a similar Senate resolution to be introduced by Sen. Tim Kaine, D-Va. “It reasserts Congress’s long-established oversight responsibilities by mandating that if no further Congressional action is taken, the Administration’s military hostilities with regard to Iran cease within 30 days.”

The first War Powers Resolution was passed in 1973 in an effort to prevent presidents from using the military without congressional approval. Since then, questions of presidential compliance have become common, with controversy stemming from President Bill Clinton’s actions in Kosovo and President Barack Obama’s operations in Libya.

On Saturday, the White House sent Congress formal notification of the drone strike under the War Powers Act, a senior administration official told The Associated Press. The notification, required by law within 48 hours of the introduction of American forces into an armed conflict or a situation that could lead to war, had to be signed and sent to Congress.

The document sent Saturday to congressional leadership, the House speaker and the Senate president pro tempore was entirely classified, according to a senior aide for the Democrats and a congressional aide speaking to the AP.

Senate Minority Leader Chuck Schumer, D-N.Y., and Sen. Robert Menendez, D-N.J., also sent a letter to the president Sunday asking him to fully declassify the notification, claiming that “there appears to be no legitimate justification” for keeping it secret.

Trump tweeted Sunday afternoon that “legal notice is not required” for him to take additional action, but claimed that his online posts provided notification to Congress that he “will quickly & fully strike back, & perhaps in a disproportionate manner” if Iran attacks “any U.S. person or target.”

Iran has vowed to retaliate and avenge the death of Soleimani. Iranian officials also announced they would be abandoning the 2015 nuclear deal, signaling threats of further nuclear proliferation.

Earlier that day, Iraqi lawmakers approved a resolution calling to expel U.S. troops from the country, who were sent there more than four years ago to aid in the fight against the Islamic State terror group.

Fox News’ Frank Miles and Vandana Rambaran and The Associated Press contributed to this report.