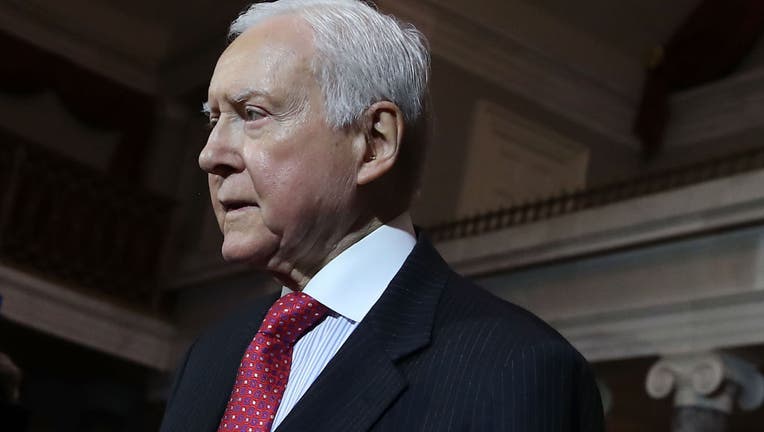 WASHINGTON, DC - DECEMBER 17: Sen. Orrin Hatch (R-UT) walks away after swearing in Sen. Cindy Hyde-Smith (R-MS) during a ceremonial swearing in, inside the old Senate Chamber on December 17, 2018 in Washington, DC. Smith beat Democrat Mike Espy in a

Former Republican U.S. Senator Orrin Hatch died Saturday at the age of 88, according to the Hatch Foundation. The foundation said he passed away at 5:30 p.m. local time surrounded by family.

A cause of death was not given. He launched the Hatch Foundation as he retired in 2019 and was replaced by Republican Mitt Romney.

A conservative on most economic and social issues, he nonetheless teamed with Democrats several times during his long career on issues ranging from stem cell research to rights for people with disabilities to expanding children’s health insurance. He also formed friendships across the aisle, particularly with the late Sen. Edward M. Kennedy.

RELATED: RNC votes to withdraw from Commission on Presidential Debates

"He exemplified a generation of lawmakers brought up on the principles of comity and compromise, and he embodied those principles better than anyone," said Hatch Foundation chairman A. Scott Anderson in a statement. "In a nation divided, Orrin Hatch helped show us a better way by forging meaningful friendships on both sides of the aisle. Today, more than ever, we would do well to follow his example."

"During his historic tenure in the Senate, Orrin Hatch was a leader of deep faith who looked out for the people who often didn’t have a voice in our laws," President Joe Biden tweeted Sunday.

Toward the end of his career, Hatch became an ally of Republican President Donald Trump, using his role as chairman of the powerful Senate Finance Committee to get a major rewrite of the U.S. tax codes to the president’s desk. In return, Trump helped Hatch deliver a key issue for Republicans in Utah by agreeing to drastically downsize two national monuments that had been declared by past presidents.

Through Trump encouraged Hatch to run again, the longtime senator, who would have faced a tough primary battle and had promised not to run again. Hatch instead stepped aside and encouraged Romney to run to replace him.

Hatch was also noted for his side career as a singer and recording artist of music with themes of his religious faith, The Church of Jesus Christ of Latter-day Saints.

He is survived by his wife, Elaine, and their six children.

Hatch came to the Senate after a 1976 election win and went onto become the longest-serving senator in Utah history, winning a seventh term in 2012. He became the Senate president pro tempore in 2015 when Republicans took control of the Senate. The position made him third in the line of presidential succession behind then-Vice President Joe Biden and the Speaker of the House.

One issue Hatch returned to over the course of his career was limiting or outlawing abortion, a position that put him at the center of one of the nation’s most controversial issues for decades. He was the author of a variety of "Hatch amendments" to the Constitution aimed at diminishing the availability of abortions.

In 1991, he became known as one of the most vocal defenders of Clarence Thomas against sexual harassment allegations from Anita Hill. Hatch read aloud at the confirmation hearings from "The Exorcist," and he suggested that Hill stole details from the book.

While unquestionably conservative, there were times Hatch differed from many of his conservative colleagues — including then-President George W. Bush when Hatch pushed for federal funding of embryonic stem cell research.

In 1997, Hatch joined Kennedy in sponsoring a $24 billion program for states to provide health insurance to the children of low-income parents who don’t qualify for Medicaid.

For Hatch, the issue of illegally downloaded music was a personal one. A Mormon, he frequently wrote religious songs and recorded music in his spare time as a way to relax from the stresses of life in Washington. Hatch earned about $39,000 in royalties from his songs in 2005.

One of his songs, "Unspoken," went platinum after appearing on "WOW Hits 2005," a compilation of Christian pop music.

In 2000, Hatch sought the Republican nomination for president, saying he had more experience in Washington than his opponents and that he could work with Democrats. Hatch readily acknowledged that winning would be a long shot. He withdrew from the race after only winning 1 percent of the vote in the Iowa caucuses and then endorsed George W. Bush.

He became a strong opponent of President Barack Obama’s 2009 health care law after pulling out of early bipartisan talks on the legislation. At one point, he said of the legislation: "It is 2,074 pages long. It is enough to make you barf."

Hatch faced a tough re-election battle from a conservative candidate in 2012, two years after a tea party wave carried longtime Utah Republican Sen. Bob Bennett out of office. Both Bennett and Hatch voted in favor of a 2008 bank bailout that rankled those on the far right.

Hatch poured about $10 million into his 2012 race and worked to build support among tea party conservatives.

Hatch was used to playing tough — he learned to box as a child in Pittsburgh to fend off the attacks of older, larger students. Unafraid to fight, he said he always made a point to quickly become friends with those he had arguments with.

When Hatch announced he would not seek re-election in 2018, he said "every good fighter knows when to hang up the gloves."

After moving to Utah in the early 1970s, Hatch — a former bishop in The Church of Jesus Christ of Latter-day Saints — ran for his first public office in 1976 and narrowly upset Democratic Sen. Frank Moss.

In 1982, he held off challenger Ted Wilson, the Democratic mayor of Salt Lake City, to win a second term by a solid margin.

He was never seriously challenged again.

Orrin Grant Hatch was born in 1934 in Pittsburgh. He married Elaine Hanson in 1957 and graduated from Brigham Young University in 1959. He received a law degree from the University of Pittsburgh in 1962 and was a partner in the law firm of Thomson, Rhodes and Grigsby in that city until 1969.

Later, he was a partner in the Salt Lake City firm of Hatch & Plumb. He had six children: Brent, Marcia, Scott, Kimberly, Alysa and Jess.