Beacon in the Galaxy: Scientists create message to beam into outer space

An international team of scientists has gotten together to create a message to potentially beam out into the cosmos with hopes it'll reach extraterrestrial life forms.

LOS ANGELES - Some might complain over a lack of excitement in our solar system but a recent discovery by MIT astronomers reminds us why we should be grateful for a "boring" location among the stars.

Astronomers at MIT reported discovering a pair of stars bound together, known commonly in the scientific community as a stellar binary, according to a study published this week in the journal Nature. These are a pair of co-dependent stars, if you will, that orbit too close for comfort, resulting in a "Cataclysmic variable," in which one star is orbiting around a white dwarf, one of the hottest, densest objects in the universe.

According to MIT, a cataclysmic variable occurs over the course of billions of years when two stars draw closer and closer to each other. This process is known to give off flashes of light and energy that are of biblical proportions.

The newly discovered celestial pair, which has been named ZTF J1813+4251, is also a cataclysmic variable with the shortest orbit detected to date.

The orbits between these two stars are so close that they could fit between the moon and the Earth, scientists noted.

So what’s so cataclysmic about this coupling of stars exactly? Well, for starters — one star is "eating" the other. 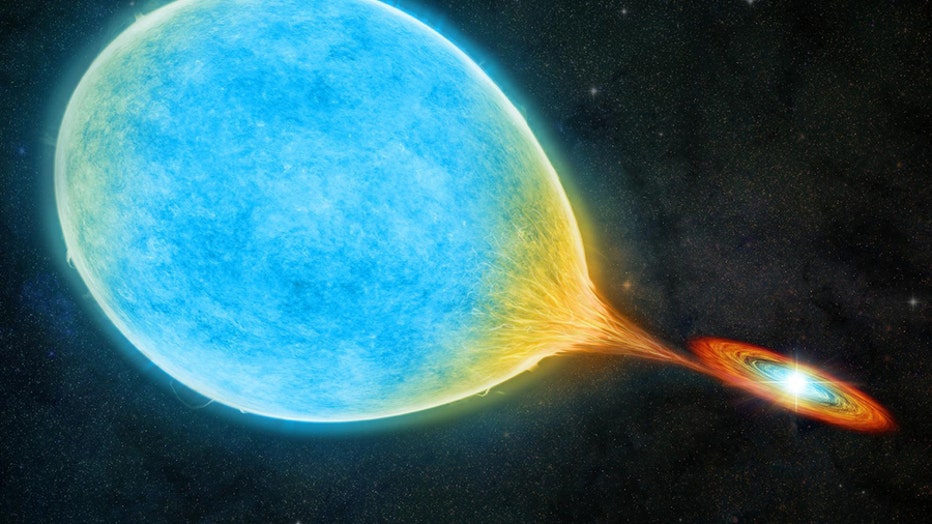 "Imagine if the moon zipped across the sky 10 times a night. That's the kind of speed we are talking about," said Massachusetts Institute of Technology astrophysicist Kevin Burdge, lead author of the study explains.

The white dwarf is called a dwarf for a reason as it pales in size compared with its neighboring star, which is roughly the same temperature as the sun. However, the white dwarf has a mass of about 56% of our sun’s but is densely packed, with a diameter about 1.5 times Earth's.

"It's an old pair of stars, where one of the two moved on - when stars die of old age they become white dwarfs - but then this remnant began to eat its companion," Burdge said.

"Basically, they were bound together for 8 billion years in a binary orbit. And now, right before the second one could end its stellar life cycle and become a white dwarf in the way that stars normally do - by evolving into a type of star called a red giant - the leftover white dwarf remnant of the first star interrupted the end of the companion's lifecycle and started slowly consuming it," Burdge continued.