BUSHNELL, Fla. - A memorial was unveiled Wednesday at Florida National Cemetery to honor gold star families – the ones left behind after their soldier pays the ultimate sacrifice.

"It means so much to us because our children will never be forgotten," said Jo Ann Maitland, a gold star mother and national president of American Gold Star Mothers Inc. "With these memorials, every day, we can have a place to go to honor and celebrate their lives and continue the services that we do for them."

The memorial is the first of a massive project by the Joint Veterans Support Committee and The Woody Williams Foundation – one that’s expected to take 10 years to complete.

The project has been funded solely by private donors. So far, they’ve raised $100,000.

"It’s amazing, and I think what we’ve seen here at Florida National Cemetery especially, with JVSC and their leadership, are just so committed to the mission," said Chad Graham, the CEO of The Woody Williams Foundation. 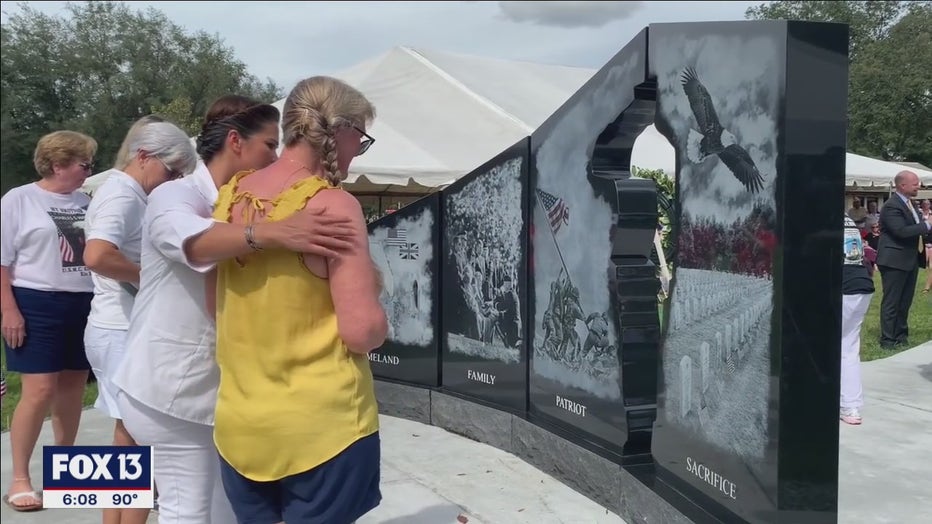 A community joined in sorrow but rooted strength, hundreds of gold star family members laid a red rose on the memorial for their sons, daughters, fathers – the list goes on.

"That’s the importance of a ceremony like this," Graham said. "So families can come together, some of them for the first time, getting to know one another, and build that community of support, that gold star families, it’s such a special part of them coming together and honoring their loved one."

And for the general public, he says, to never forget the sacrifice that was made.

Right now, there are 87 gold star monuments across the country, but this is the second in a national cemetery. The other resides in Pennsylvania’s Washington Crossing National Cemetery.