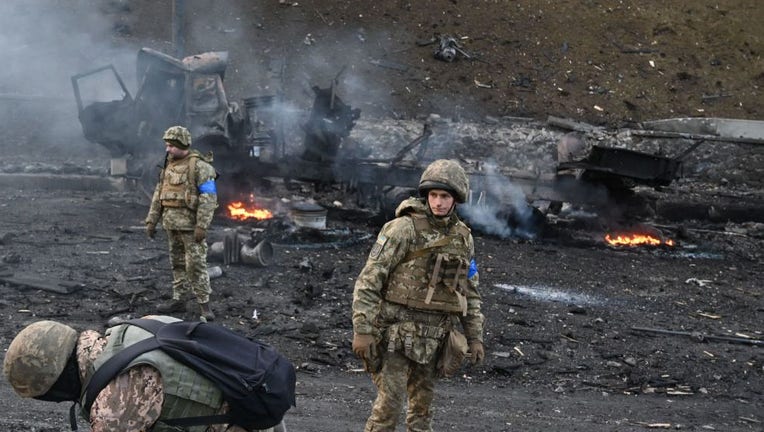 Ukrainian service members look for and collect unexploded shells after a fighting with Russian raiding group in the Ukrainian capital of Kyiv in the morning of February 26, 2022. (SERGEI SUPINSKY/AFP via Getty Images)

BRUSSELS - NATO will increase the strength of its rapid reaction force nearly eightfold to 300,000 troops as part of its response to an "era of strategic competition," the military alliance's secretary-general said Monday.

The NATO reaction force currently numbers around 40,000 soldiers which can deploy quickly when needed.

Coupled with other measures including the deployment of forces to defend specific allies, NATO Secretary-General Jens Stoltenberg said the move is part of the "biggest overhaul of collective defense and deterrence since the Cold War."

"These troops will exercise together with home defense forces," Stoltenberg said. "And they will become familiar with local terrain, facilities, and our new pre-positioned stocks. So that they can respond smoothly and swiftly to any emergency."

Stoltenberg made the remarks at a press conference ahead of a NATO summit later this week in Madrid when the 30 allies are expected to also agree on further support to Ukraine in its war against Russia.

Stoltenberg said he expects allies to make clear they consider Russia "as the most significant and direct threat to our security."

In NATO's new strategic concept, the alliance is also expected to address for the first time the security challenges posed by China, Stoltenberg said. In Madrid, allies will discuss how to respond to the growing influence of Russia and China in their "southern neighborhood," he added.

Stoltenberg said allies will agree to deliver further military support to Ukraine when they convene in Spain, with NATO members set to adopt a "strengthened comprehensive assistance package," including deliveries of secure communication and anti-drone systems.

Over the long term, Stoltenberg said allies aim to help Ukraine transition from Soviet-era armaments to modern NATO equipment. The world's seven leading economic powers underscored Monday their commitment to Ukraine for "as long as it takes."

Another central theme at the NATO summit will be the possibility for Finland and Sweden to join the alliance following Russia’s invasion of Ukraine.

NATO member Turkey has so far blocked the applications, citing what it considers to be the two countries’ soft approach to organizations Turkey considers to be terrorist, such as the Kurdistan Workers’ Party, or PKK.

Turkey is demanding that Sweden and Finland grant extradition requests for individuals who are wanted by Turkish authorities. Ankara claims the countries are harboring PKK members as well people it says are linked to a failed 2016 coup.

Turkey also wants assurances that arms restrictions imposed by the two countries over Turkey’s 2019 military incursion into northern Syria will be removed.

Stoltenberg said that Turkish president Recep Tayyip Erdogan, Finnish President Sauli Niinisto and the Swedish prime minister Magdalena Andersson have agreed to meet on the sidelines of the summit.

"We have worked hard since Finland and Sweden applied for membership to ensure that they can join the alliance as soon as possible," Stoltenberg said. "I will not make any promises, but I can assure you that we are working actively to ensure progress because the application of Finland and Sweden to join NATO, they are historic."

"By the end of the year, they will have invested well over 350 billion US dollars extra since we agreed our defense investment pledge in 2014," Stoltenberg said.

NATO countries slashed their military budgets in the 1990s following the end of the Cold War, but upped spending when Russia annexed Ukraine’s Crimean Peninsula in 2014. In that year, NATO allies also pledged to reach a defense budget target of 2% of their gross domestic product by 2024.

"Nine allies now reach – or exceed – the 2% target. Nineteen allies have clear plans to reach it by 2024," Stoltenberg said. "Two percent is increasingly considered a floor, not a ceiling. We will also agree to invest more together in NATO."

Jan M. Olsen in Copenhagen contributed to this report.