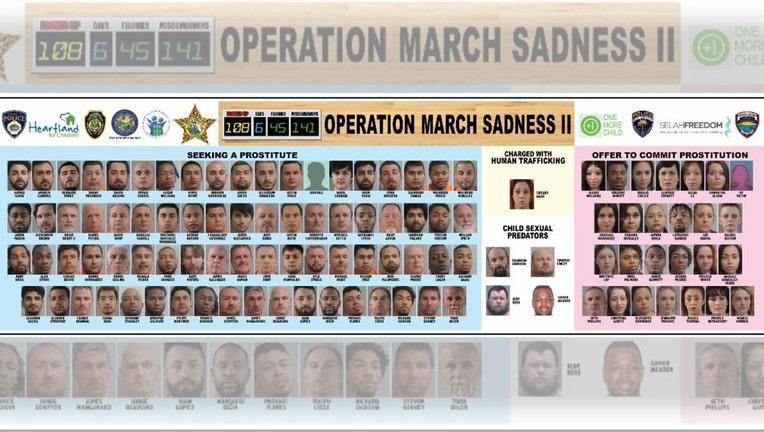 Basically, the undercover detectives communicated with suspects and arranged a meetup location where they were arrested – one couple traveled as far as Bradenton to receive $1,000 for sex. In total, 108 people were arrested. Four suspects are Disney employees, according to the sheriff's office, while one works for Fun Spot in Orlando.

Sheriff Grady Judd announced the arrests with a large board of mugshots, described the presentation as a "bracket of losers."

The oldest suspect was 67 years old – who showed up drinking Ensure, detectives said – and the youngest is a 17-year-old boy.

He said some who were arrested didn't say they were human trafficking victims, but one female did.

Judd said one person was arrested for human trafficking, 32-year-old Tiffany Nash of Orlando. The victim arrived at the undisclosed location as a proustite, but investigators learned that Nash was threaded by Nash.

"This trafficker followed her there. She was charging $300, if she was lucky, she gets $20," the sheriff said. "The trafficker also gives her drugs and threatens her with a firearm. She's not only being psychologically threatened she is being threatened with significant injury or death as well as playing with her mind with drugs."

Sheriff Judd highlighted other suspects, including:

"What amazes me is we can do another operation starting next week and fill this board up again," Be sure of one thing, these chiefs and I will do that. We'll be back. If you violate the law, we're going to take you to jail.