Dr. Jesus Samaniego is the chief of obstetrics and gynecology at Kelsey-Seybold Clinic in Houston, Texas and discusses the results of a recent study that found COVID-19 vaccines could temporarily impact the length of a woman's menstrual cycle. (Credit: FOX 26 Houston/KRIV)

Moderna’s COVID-19 vaccine works in babies, toddlers and preschoolers the company announced Wednesday -- and if regulators agree it could mean a chance to finally start vaccinating the littlest kids by summer.

Moderna said in the coming weeks it would ask regulators in the U.S. and Europe to authorize two small-dose shots for youngsters under 6. The company also is seeking to have larger-dose shots cleared for older children and teens in the U.S.

The nation’s 18 million children under 5 are the only age group not yet eligible for vaccination. Competitor Pfizer currently offers kid-sized doses for school-age children and full-strength shots for those 12 and older.

But parents have anxiously awaited protection for younger tots, disappointed by setbacks and confusion over which shots might work and when. Pfizer is testing even smaller doses for children under 5 but had to add a third shot to its study when two didn't prove strong enough. Those results are expected by early April.

RELATED: New COVID-19 variant popping up in Europe, Asia worries scientists of uptick in US

Vaccinating the littlest "has been somewhat of a moving target over the last couple of months," Dr. Bill Muller of Northwestern University, an investigator in Moderna’s pediatric studies, said in an interview before the company released its findings. "There’s still, I think, a lingering urgency to try to get that done as soon as possible."

The younger the child, the smaller the dose being tested. Moderna said a quarter of the dose it uses for adults worked well for youngsters under age 6.

Moderna enrolled about 6,900 tots in a study of the 25-microgram doses. Early data showed after two shots, youngsters developed virus-fighting antibody levels just as strong as young adults getting regular-strength shots, the company said in a press release.

Moderna said the small doses were safe, and the main side effects were mild fevers like those associated with other commonly used pediatric vaccines.

Once Moderna submits the data to the FDA, regulators will debate whether to authorize emergency use of the small doses for tots. If so, the Centers for Disease Control and Prevention then will decide whether to recommend them. 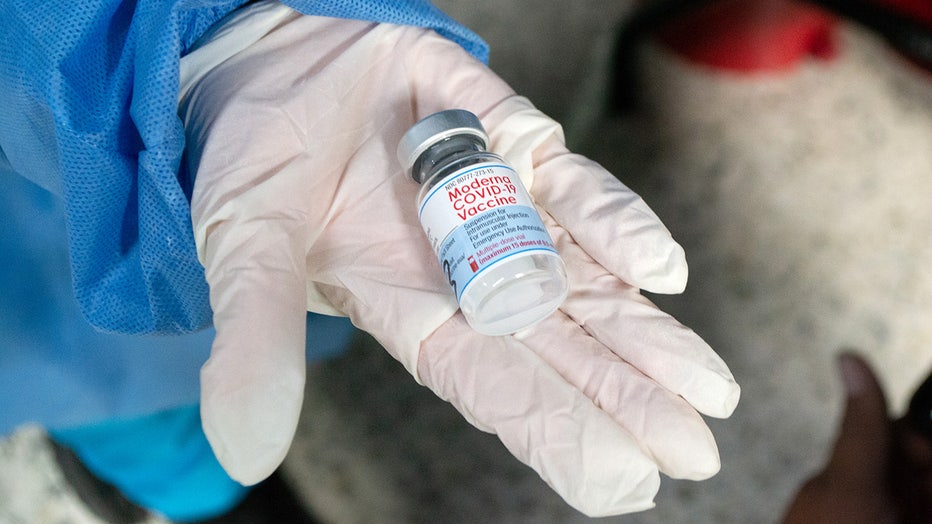 While COVID-19 generally isn’t as dangerous to youngsters as to adults, some do become severely ill. The CDC says about 400 children younger than 5 have died from COVID-19 since the pandemic’s start. The omicron variant hit children especially hard, with those under 5 hospitalized at higher rates than at the peak of the previous delta surge, the CDC found.

COVID-19 vaccines in general don’t prevent infection with the omicron mutant as well as they fended off earlier variants -- but they do still offer strong protection against severe illness.

Moderna reported that same trend in the trial of children under 6, conducted during the omicron surge. While there were no severe illnesses, the vaccine proved just under 44% effective at preventing any infection in babies up to age 2, and nearly 38% effective in the preschoolers.

Moderna said also said Wednesday it will ask the Food and Drug Administration to clear larger doses for older children.

While other countries already have allowed Moderna’s shots to be used in children as young as 6, the U.S. has limited its vaccine to adults. A Moderna request to expand its shots to 12- to 17-year-olds has been stalled for months.

The company said Wednesday that, armed with additional evidence, it is updating its FDA application for teen shots and requesting a green light for 6- to 11-year-olds, too.

Moderna says its original adult dose -- two 100-microgram shots -- is safe and effective in 12- to 17-year-olds. For elementary-age kids, it’s using half the adult dose.

But the FDA never ruled on Moderna’s application for teen shots because of concern about a very rare side effect. Heart inflammation sometimes occurs in teens and young adults, mostly males, after receiving either the Pfizer or Moderna vaccines. Moderna is getting extra scrutiny because its shots are a far higher dose than Pfizer's.

The risk also seems linked to puberty, and regulators in Canada, Europe and elsewhere recently expanded Moderna vaccinations to kids as young as 6.

"That concern has not been seen in the younger children," said Northwestern’s Muller.