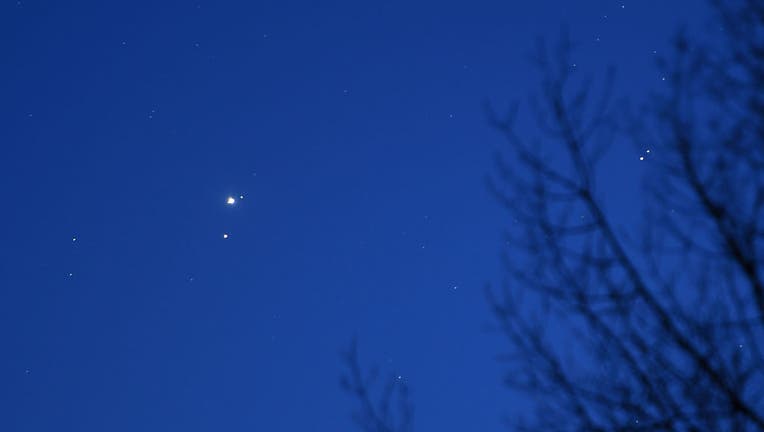 Jupiter (centre left) and Mars (centre left below) appear next to each other in the sky, above Ely in Cambridgeshire. (Photo by Joe Giddens/PA Images via Getty Images)

Memorial Day weekend may unofficially kick off the start of summer, and this holiday weekend brings an extra special treat to the night skies.

Mars and Jupiter are going to draw incredibly close in the predawn sky on the nights of May 27-30.

NASA says the two planets will appear 20 degrees or so above the horizon in the eastern-southeastern sky. As you look up, they’ll appear so close to each other, that they’ll be no more than the width of a raised finger apart.

NASA says Mars will be the one just to the lower right of Jupiter. 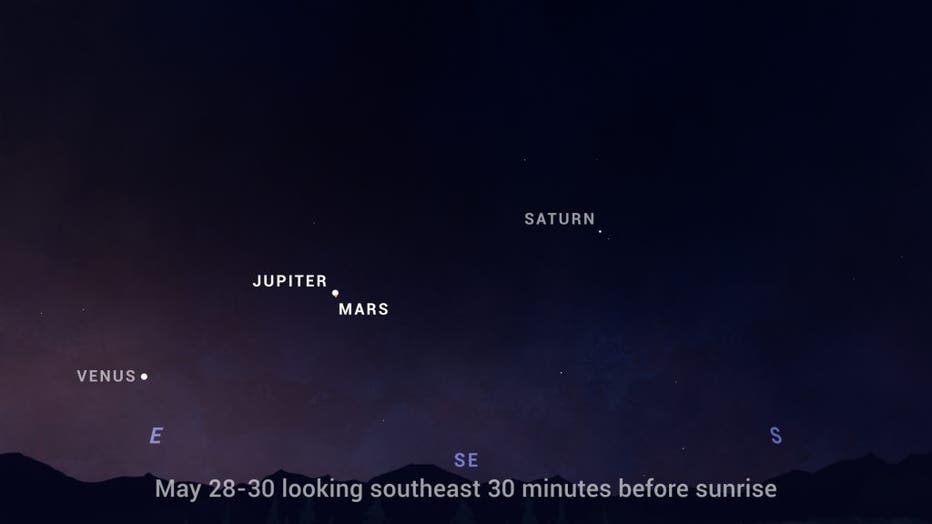 Sky chart showing how Jupiter and Mars will appear in the pre-sunrise sky on May 28-30. Credits: NASA/JPL-Caltech

Mars is more than 136 million miles away, with Jupiter’s distance nearly four times that. Yet Jupiter will be the far brighter of the two planets, NASA says. That’s because Mars is much smaller and reflects far less sunlight.

It might be necessary to use binoculars or a telescope to spot Mars clearly, said Alphonse Sterling, a NASA astronomer. But he noted that observers should have no trouble identifying Jupiter, even with unaided eyes.

A conjunction is a celestial event in which two planets, a planet and the Moon, or a planet and a star appear close together in Earth’s night sky. Conjunctions have no profound astronomical significance but are nice to view.

Mars will catch up to Jupiter again and pass it during another conjunction in August 2024.