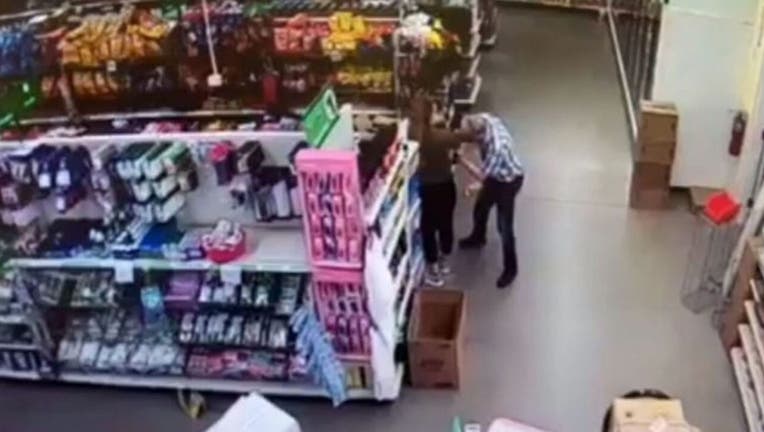 A man can be seen wiping his face on a Dollar Tree employee's shirt in Michigan after being told he needed to wear a mask, according to police. (Holly Police Department)

FOX NEWS - Authorities in Michigan are searching for a man who was caught on video using a Dollar Tree employee's shirt to wipe his nose after being advised he had to wear a mask in the store to prevent the spread of coronavirus.

The Holly Police Department said Monday on Facebook the incident happened Saturday around 1:30 p.m. at the store on North Saginaw Street in the village of Holly, located about 53 miles northwest of downtown Detroit.

Police said the clerk was working when she noticed the man walking through the store without a mask, despite signs posted on the building's entry doors that stated all customers must wear a mask to enter.

On April 24, Gov. Gretchen Whitmer issued an executive order requiring everyone to wear a face-covering in an enclosed public space in order to slow the spread of COVID-19.

When the clerk told the man he needed one, police said he walked over and said "Here, I will use this as a mask" before wiping his face and nose on the face of the clerk's shirt

Footage released by the Holly Police Department shows the man walking to the clerk and wiping his nose and face on her shirt.

Police said the man “continued to be loud and disruptive inside the store” before he left in a white van.

The man in the video is wanted on suspicion of assault. Anyone with information about the identity of the man or about the incident is asked to contact the Holly Police Department at (248) 634-8221.

There were 41,834 cases of COVID-19 in Michigan as of Monday with at least 4,009 deaths, according to Johns Hopkins University.