The mystery of the silver monolith in Utah

As soon as it was discovered, the mysterious silver monolith in Utah was gone.

SALT LAKE CITY - A mysterious silver monolith that generated international attention recently vanished from a remote area of Utah. Police in the area said they wouldn’t be opening a major investigation into its disappearance — but the mystery of where it went may have been solved.

The structure was first spotted Nov. 18 in a remote area of red rock by state helicopter crews helping wildlife biologists count bighorn sheep. It was about 11 feet tall with sides that appeared to be made of stainless steel. Its creator remains a mystery.

A Nov. 23 statement from the Utah Department of Public Safety said officials had "no obvious indication" of who might have put it there. The gleaming, otherworldly object garnered widespread attention on social media and prompted wide-ranging conspiracy theories, ranging from an art installation to the work of aliens.

Utah officials did not say specifically where the monolith was located, but many soon found it through satellite images dating back to 2016 and determined its GPS coordinates — leading to hundreds of people trekking into the remote area to see it. 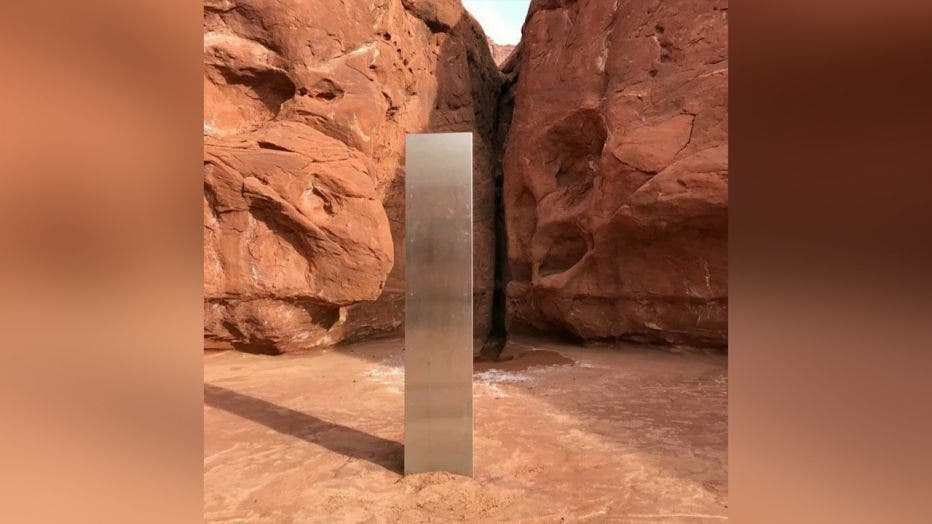 But as soon as it was discovered, it disappeared. On Nov. 28, the Bureau of Land Management in Utah said in a statement that the object had been removed from the area “by an unknown party.”

A user on Instagram, Ross Bernards, said he visited the monolith on the evening of Nov. 27 to take some photos of the mysterious object, and he witnessed four men dismantle the structure and carry it out with a wheelbarrow.

“They quickly broke it apart and as they were carrying to the wheelbarrow that they had brought one of them looked back at us all and said ‘Leave no trace,’” Bernards wrote in an Instagram post recounting the moment.

Bernards said he and three friends who visited the area stayed overnight and witnessed “at least 70 different cars” crowding the desert landscape in search of the monolith.

“If you’re asking why we didn’t stop them well, they were right to take it out,” Bernards added. “We could literally see people trying to approach it from every direction to try and reach it, permanently altering the untouched landscape. Mother Nature is an artist, it’s best to leave the art in the wild to her.”

The local San Juan County Sheriff’s Office said it wouldn’t investigate the taking of the object, which was illegal to begin with because it was placed without permission amid red rocks on a remote section of public land.