In the video, Phoenix firefighters at the department’s training academy drop a frozen bird into the deep fryer and flames suddenly shoot up into the sky.

PHOENIX - Thanksgiving has become synonymous with eating turkey — but it can also lead to disaster if you’re not careful with the deep-fryer.

In fact, Thanksgiving is the peak day for home cooking fires, according to the National Fire Protection Association, followed by Christmas and Christmas Eve. In 2017, fire departments across the country responded to an estimated 1,600 cooking fires.

For those planning to deep-fry their turkey over the holiday season, the Phoenix Fire Department conducted a demonstration of what not to do with the bird. In a video, firefighters at the department’s training academy drop a frozen bird into the pot and flames suddenly shoot up into the sky. 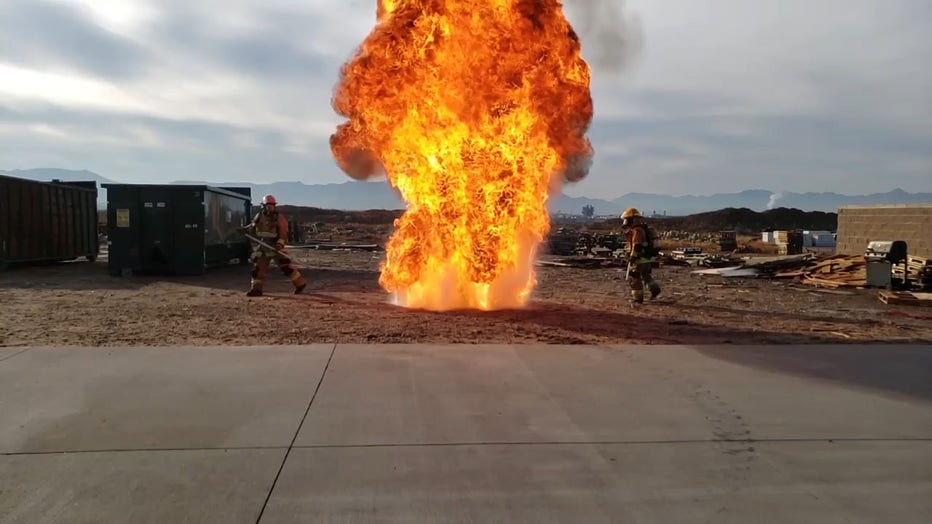 The department warned the public to always fully thaw the turkey beforehand, as a partially frozen turkey will cause hot oil to splatter, and never deep-fry indoors.

Turkey fryers can easily overheat and start a fire, according to U.S. Fire Administration. Anyone planning to fry foods should check the temperature often with a cooking thermometer so the oil won’t overheat.

The pot, lid and handles of a turkey fryer can also get dangerously hot and potentially cause burn injuries, so anyone doing the cooking should wear long gloves that protect the hands and arms.

The U.S. Fire Administration suggests that those deep-frying a turkey should determine the correct amount of oil needed by first placing the turkey in a pot with water to prevent an overfilled cooking pot from tipping over.

The department also reminded Thanksgiving cooks that children and pets should be kept at least 3 feet away from the turkey fryer, as the pot can easily tip over and spill hot oil across a large area.

RELATED: Here’s why Thanksgiving falls on the fourth Thursday of November
RELATED: Costco, HomeGoods and Lowe’s among major retailers closed on Thanksgiving 2019