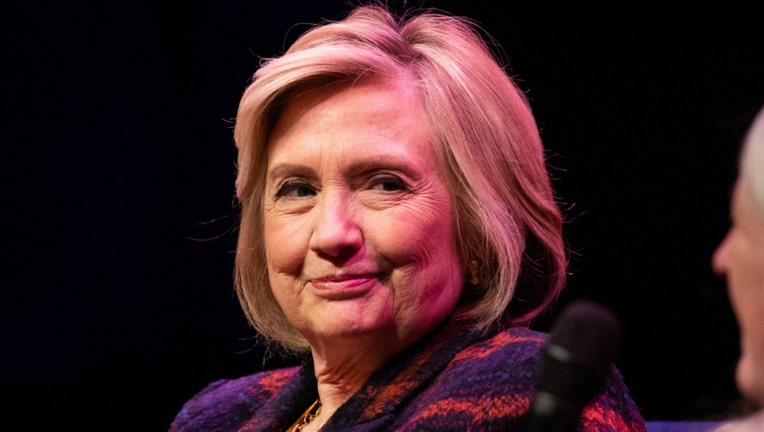 Hillary Clinton (left) talking to Mary Beard at the Southbank Centre in London at the launch of Gutsy Women: Favourite Stories of Courage and Resilience a book by Chelsea Clinton and Hillary Clinton about women who have inspired them. PA Photo. Pictu

Hillary Clinton continued to stir speculation on Tuesday that she could make a late entry into the 2020 Democratic presidential primary, saying “many, many, many people” are pressuring her to consider a third run for the White House.

The former secretary of state said during an interview with BBC Radio 5 Live that she hasn't ruled out joining the already-crowded Democratic fray looking to be the nominee to challenge President Trump in next year’s general election.

“I, as I say, never, never, never say never,” Clinton said. “I will certainly tell you, I’m under enormous pressure from many, many, many people to think about it.”

Clinton added: “But as of this moment, sitting here in this studio talking to you, that is absolutely not in my plans."

While previous election cycles have seen the list of potential nominees winnow down as the first primaries approach, the 2020 Democratic primary looks different. With no clear front-runner and shifting polls, a number of potential candidates have indicated an interest in launching a late bid for the presidency.

Michael Bloomberg, the billionaire former mayor of New York City, filed paperwork last week to qualify for the primary in Alabama and has spent the past few weeks talking with prominent Democrats about the state of the 2020 field, expressing concerns about the steadiness of former Vice President Joe Biden's campaign and the rise of liberal Sen. Elizabeth Warren, D-Mass.

If Clinton were to join the race, she would quickly become the biggest figure in the Democratic field. She has twice run for president in the past, losing the Democratic nomination to then-Sen. Barack Obama in 2008 and losing the general election in a close race to Trump in 2016.

Rumors about Clinton entering the 2020 race, however, have been circulating for a while, with Mark Penn, an adviser and pollster to Bill and Hillary Clinton from 1995 to 2008, making waves last year by predicting in The Wall Street Journal that Clinton would return in 2020 as a “liberal firebrand."

Despite the rumors, Clinton’s supporters in early voting states don’t think she’ll be entering the race in 2020.

“I know the rumors floating out there that that’s a possibility,” Soucy added. “I don’t believe for a second that it is.”