President Joe Biden took aim at ghost guns during a speech announcing Steve Dettlebach as his nominee to run the Bureau of Alcohol, Tobacco, Firearms and Explosives. The president, who also called for assault weapons to be banned, announced new federal regulations being finalized that will come down on any manufacturer who makes the parts used for ghost gun kits.

Gun-related deaths in 2020 were the highest on record in over 25 years, according to data compiled by the U.S. Centers for Disease Control and Prevention.

In 2020 alone, 79% of all homicides and 53% of all suicides involved a firearm and while all population groups experienced gun-related deaths, some groups were more impacted than others, the CDC noted.

More than 24,000 Americans killed themselves with firearms in the same year, a slight increase over the 23,888 Americans who died by suicide using a firearm in 2019.

"The tragic and historic increase in firearm homicide and the persistently high rates of firearm suicide underscore the urgent need for action to reduce firearm-related deaths. We must work together by taking preventative actions that have both immediate & long-term solutions," Dr. Rochelle Walensky, director of the CDC, wrote in a tweet on Tuesday.

The CDC did not research the reasoning behind the surge but pointed to "long-standing systemic inequities" and structural racism which limits economic and educational opportunities that the agency said contributes "to unfair and avoidable health disparities among some racial and ethnic groups."

Although the overall firearm suicide rate remained relatively unchanged between 2019 and 2020, young persons and some ethnic minority groups experienced increases in firearm suicide.

The largest increase occurred among AI/AN persons, resulting in the highest firearm suicide rate as of 2020 among this group, according to the CDC.

While the CDC did not look into the reasoning behind the surge, researchers took into account economic status among data sets and found that unsurprisingly multiple factors such as income inequality, unemployment, and housing insecurity could have played a role in the increased numbers.

Also noteworthy were the potential effects of the COVID-19 pandemic. The CDC posited that multiple stressors such as changes and disruptions to services and education, mental stress, social isolation and job loss caused by the impacts of the ongoing pandemic could have likely contributed to the higher gun-related deaths. 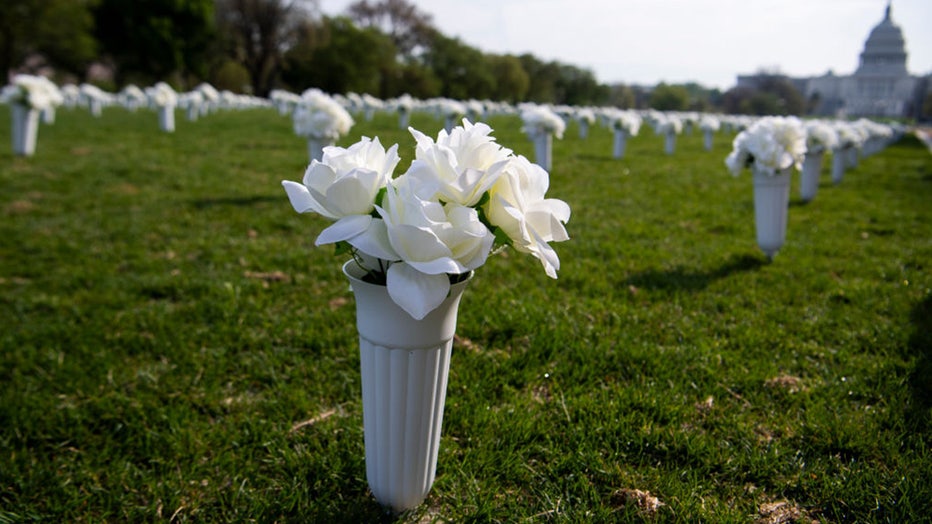 FILE - The Gun Violence Memorial, which is composed of 40,000 flowers that represent the deaths from gun violence in the U.S. each year, is pictured on the mall as members of Congress conducted a news conference to highlight the importance of federal (Tom Williams/CQ-Roll Call, Inc via Getty Images)

In April, the CDC analyzed data from a group of researchers who published their findings in the New England Journal of Medicine and found that gun-related deaths rose sharply among children and adolescents in 2020.

Researchers also said the increase was driven by homicides which also saw a 33.4% jump between 2019 and 2020 and suicides which increased by 1.1%. They said up until recently, firearm-related injuries came second to motor vehicle crashes as the leading cause of death from people between one and 19 years old.

The analysis showed drug overdoses and poisoning also increased by 83.6% from 2019 to 2020 among children and adolescents and became the third leading cause of death in that age group.

Analysts said they can’t explain why gun-related deaths rose sharply during the COVID-19 pandemic but said they can’t assume it will return to pre-pandemic levels in the future.

The uptick in gun violence appears to have continued in 2021, with several cities setting records for homicides last year, including Atlanta, Austin, Milwaukee, Philadelphia, Portland, St. Paul, and several others.

FOX News and Chris Williams contributed to this report. This story was reported out of Los Angeles.